Mary Descenza Mohler Celebrates her Life as Wife and Mother

Mary Descenza Mohler and husband, Charlie, both come from somewhat large families – she from a family of 5, and he is one of 7.

Together, with children Maggie, 7, Emily, 4, Joey, 3, and John, 1, added to their family, they’ve found a happy medium, and Mary says there are no discussions about having more.

Who has the time and energy, right Mary?

“I’ve been running around, taking the kids to their swim lessons, gymnastics lessons and school along with the occasional adventure to children museums, local parks or any place where I think the kids would have a good time,” she said.

“My life is filled with more laundry than I know what to do with, making lots of meals (often that don’t get eaten), wiping noses and hands and less ‘me’ time, but it has more spontaneity, more laughs and more love and kisses than I ever imagined.”

Mohler’s journey to motherhood began shortly after she set the world record in the 200 butterfly at the 2009 World Championships in Rome. 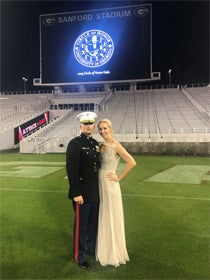 friends (he was her sister’s husband’s college roommate) and slowly evolved into more than that, dating and falling in love.

A week after 2009 Worlds, they were married, and less than two years later, they welcomed daughter Maggie into the family.

Mohler said once she started having children, she knew she would likely never make a comeback because she would never be able to give 100 percent to her swimming.

For her, family always comes first.

“I was in a place in my life where I was happy to take a step back from swimming,” said Mohler, whose last National Team competition was at 2010 Short Course World Championships in Dubai. “I realized that I was ready to give up the professional swimming lifestyle and spend time with my husband and family and finally have some free time to go on adventures and have different life experiences.

“I sacrificed a lot of family time while I was swimming, so I didn’t want to ask that of my kids. I want to be able to take them to places where they would feel enriched, not drag them to watch me swim or miss out on time with them while I practice. I had my turn, found success and fulfillment and now it’s their turn to be the stars of my life.”

Mohler said while she never officially retired, after having missed a spot on the 2004 and 2008 Olympic Team despite being one of the top fliers in the world, she was ready to move on before the 2012 Trials came along (plus she was pregnant most of the year).

She added that her many years as a top-level competitive swimmer prepared her immensely for the responsibilities and requirements of motherhood – probably better than anything else could have.

“My swimming career definitely helped prepare me for raising four active children,” she said. “After waking up at 5 a.m. for morning practices, waking up with a newborn at night wasn’t that difficult for me. Swimming taught me that you can always finish even the most draining races, like the 200 fly. This helps me on long days when things just aren’t going right; dinner gets burned, kids are fighting and my to-do list keeps getting longer. I know that I can push through and finish the day, just like I finished every race.

“Swimming also helped with my organizational and time management skills with raising my family. I need to have lunches prepared, snacks ready and bags packed for the week ahead. After maintaining a busy schedule in college as a biology major and athlete, I now can easily keep everyone’s school, extracurricular activities and doctor appointments on a tight schedule.”

And while it might appear that she gives so much to her family that she doesn’t leave anything for herself, Mohler said that’s not true.

Even if it’s just 15 minutes on the treadmill at the local YMCA while one of the kids is taking swim lessons, she makes time to exercise and mentally “checkout” while working up a quick sweat.

And she still enjoys her pool time – even it’s just for a few minutes here and there.

“I still love getting into the pool, but anything over a 75 butterfly and the lifeguards start looking at me as if they might need to save me,” said Mohler, who has moved with her Marine husband from Japan to Monterey, Calif., to Quantico, Va., to just outside of Philadelphia for the next few years.

“Swimming in a pool will always be my ‘happy place’ and is almost like a quick retreat to me. As a family, it’s also important for us to maintain an active life. With the weather finally getting nicer, we’ve been taking the kids to local parks to find some great bike or hiking trails.”

More than a decade after winning her fourth consecutive NCAA title in the 200 fly, Mohler was honored as an inductee into the Circle of Honor for the University of Georgia this past February.

It was something she aspired to achieve ever since her high school recruiting trip to Athens.

She said becoming a part of Georgia’s history is one of her proudest accomplishments as her time at Georgia helped define her as not only a student athlete but also as a person.

“I found out the summer of 2018 that I was going to be inducted into the hall of fame, and I was able to take my family to UGA’s homecoming game,” she said. “There, I was able to share my love of my school with my children, and I saw a spark in their eyes. I know this is just the start of their Bulldog loyalty.”

Along with that loyalty, Mohler said she works hard to instill the same work ethic and determination she had as a swimmer in her children no matter what they decide to be.

“Being a mother has always been a dream of mine,” she said. “Sure, the hours are long and there are moments where I feel like I’m losing my mind, but when I see one of the kids finally achieve a goal and see the pride on their face, it makes it all worth it. Seeing the world through the eyes of a child, full of potential and innocence and being able to help shape the next generation is completely fulfilling as a parent.

“I love making memories for my children; celebrating random holidays, like pi day, making homemade pizza every Friday, and making day trips and just seeing where life takes us. All these things hopefully make for a magical childhood for my kids, and we enjoy these experiences together.”