Even though she always believed she was going to be an Olympian, when it came to fulfilling that dream, Kristine Quance Julian felt snake-bitten but found enough resolve to earn a spot on the 1996 Atlanta team.

“I remember telling my parents at the age of 10 that I was going to go to the Olympics, so yes it was a dream that eventually became a goal,” she said. “My dad laughed when I told him, which likely made me a little more determined.”

As a strong contender in 1992, Julian contracted mononucleosis a few weeks before Olympic Trials.

It not only impacted her training – making her slow and lethargic – but also made her incredibly tired during the meet.

“I called my coach, Bud McAllister (at CLASS Aquatics in her hometown of Northridge), a couple weeks before the meet to tell him the doctor’s diagnosis, with his response being, ‘well that makes sense,’ since my training at the time was horrible,” said Julian.

She scratched the 400 individual medley – her favorite and best event – at Trials and focused on the 200 breaststroke, mustering all the energy and fortitude she could.

When she finished third and one place off the team, she refused to let it stop her from wanting more.

If anything, it just fueled her desire to come back stronger in four years.

“My greatest memory of that meet was sitting in the diving well, crushed after finishing third and promising myself I’d work so hard the next four years that I’d make the ‘96 team no matter what illness or obstacle was thrown my way,” she said.

Over the next couple of seasons, Julian made good on that promise. She made a strong comeback at the 1993 Pan Pacific Championships in Kobe, Japan, winning gold and bronze in the 400 IM and 200 breaststroke, respectively.

A year later, she took home bronze in the 400 IM and finished sixth in the 200 breast at the 1994 World Championships in Rome.

Unfortunately, two years later at the 1996 Olympic Trials, she faced a new kind of disappointment when she was disqualified in her best events.

Once again, it appeared her shot at destiny was not to be, but she persevered, and earned spots on the team in two of her most unlikely events – the 100 breast and 200 IM.

“I was disqualified the first morning of the meet in the 400 IM prelims for the back-to-breast turn,” she said. “They said I pushed off on my side, toward my back, instead of toward my stomach. It was my favorite race, the one I trained for and focused on, so yes, you could say it made for a crazy start to the meet.

In Atlanta, Julian failed to medal in her individual events (9th in the 200 IM and 19th in the 100 breast), but she left Georgia with a gold medal as a member of the 400 medley relay team.

Julian said that experience proved to be a great lesson for her in never giving up – and she thoroughly enjoyed swimming in front of a home crowd.

“I’m proud of the way I handled myself and turned a huge disappointment into motivation to make an event I wasn’t favored in the very next day,” she said. “Atlanta was amazing, and I am grateful to have been able to experience competing in front of the home crowd.

“Individually it was a disappointing performance in the pool, but I treasure the moments out of the water – opening ceremonies, time with teammates.”

Julian stayed in swimming for the next four years – winning individual and team NCAA titles at the University of Southern California, where she was the back-to-back winner (1995-96 and 1996-97) of the Honda Sports Award for swimming and diving, recognizing her as the outstanding college female swimmer of the year.

Internationally, she excelled as well, showing her tremendous versatility by winning the 200 and 400 IM events and winning silver in the 200 butterfly at the 1997 Pan Pacific Championships in Fukuoka, Japan. 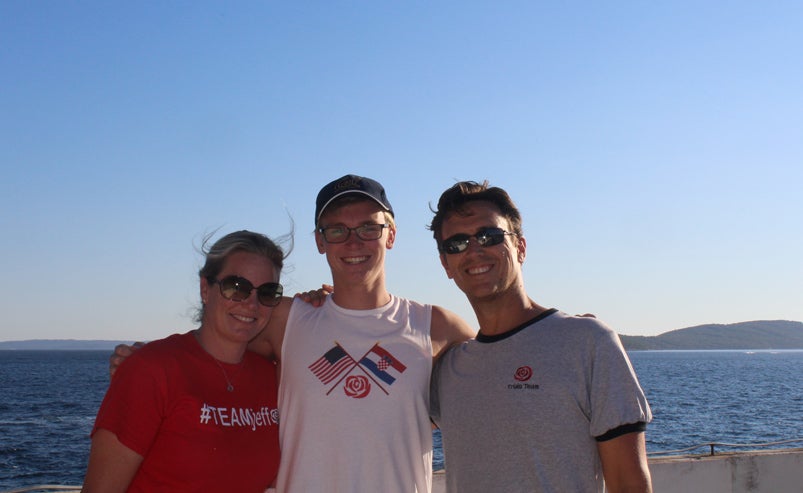 The next year at the World Championships in Perth, Australia – where she competed in four individual events (only the fourth American woman to do so at a World Championships), Julian made the finals of the 200 fly and 200 IM but left with no medals or titles.

And while it proved to be her final international meet, she did return in 2000 to compete at the Olympic Trials, but didn’t make the team in any events and retired shortly after.

And once she left, she was gone from competition for good. No looking back.

“I swam horribly (at 2000 Trials); I was actually slower than I’d been a year prior, just a few months after having a baby (son Trenton),” she said. “Looking back, I’m sure I’d over-trained and just tried to prepare with the same crazy intensity I did as a teenager.

“But I never considered a comeback. Unfortunately, I’d left the sport a little bitter and didn’t even want to step on a pool deck for a few years. Obviously, that’s changed.”

While she admits she never thought about coaching when she was competing, Julian found her calling teaching and mentoring young swimmers.

She and husband, Jeff, have been directing the swim programs at Rose Bowl Aquatics in Pasadena (they live in Glendale) for the past 14 years, and she can’t imagine doing anything else. 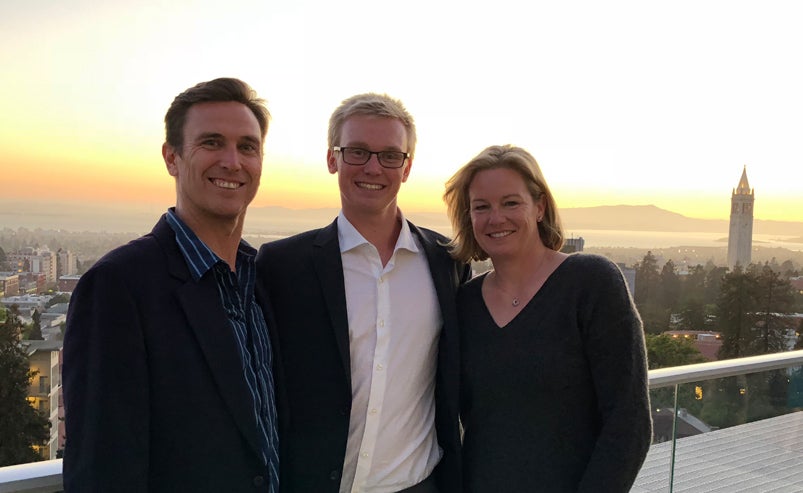 “I now try to stay away from saying ‘I’d never…’ It was Jeff who pulled me into coaching when he took over as head coach at Rose Bowl, and lucky for me, I was able to fall in love with the sport again, from a different angle and with a healthier perspective.”

“Life post-swimming is very good right now, though there have been ups and downs, as it is for everyone; I have one son, Trenton, who’s just finishing his freshman year at Cal Berkeley, where he swims as well.

“Jeff and I were able to recently celebrate our 20th anniversary in Italy, which was an amazing time. I’d say that life is more than good!”

And while she identifies her team experiences at USC and with the many international teams she was a member of as her career highlights, she regrets not having taken the time to enjoy the whole experience and process more.

“I used to get annoyed when my mom would constantly remind me to ‘stop and smell the roses,’” she said. “I was so serious most of the time and always looking to take that next step forward. Nothing ever seemed good enough for me and that kind of mindset is not healthy.”

But time and life have given her a new, warm perspective about her swimming career, and she looks back with pride and joy at what swimming gave her and continues to give her life.

“In coaching we talk a lot about our career being more about teaching life lessons through the sport of swimming over just coaching, but I think this sport may be teaching me more now than it did when I was a swimmer,” said Julian, who survived Jeff’s Stage 4 lung cancer diagnosis several years ago, helping him come through it into remission.

“Balance gets thrown around too much these days, as that’s relative, but I think gratitude and appreciation for the journey is something that isn’t always focused on enough. While I may have learned it after my individual swimming career was over, the sport of swimming has given me so much in life and that appreciation is what I strive to keep in mind daily now.”