U.S. National Team member Gianluca Urlando wrapped up the TYR Pro Swim Series at Clovis Saturday with his third win of the meet, taking the men’s 200m IM in 2:00.12. His time was more than three seconds ahead of the rest of the field, with Jarod Arroyo of Puerto Rico taking second in 2:03.29 and Erick Gordillo of Guam finishing third in 2:05.22.

Urlando also won the 100m fly on Thursday, and the 200m fly on Friday.

“I was happy with my race,” Urlando said. “I thought I would go a little faster, but I think I’m a little tired from the entire meet. This was definitely a good first stop on my summer schedule. It gives me a lot of confidence heading into other meets.”

Fellow National Teamer Erica Sullivan won the women’s 1500m freestyle in 15:55.25, a personal best time and the third-fastest in the world this year. Mackenzie Padington was second in 16:56.58, and Ayumi Macias of Mexico was third in 16:56.76.

It was Sullivan’s second win of the meet after taking the 400m free on Friday.

“I had a really tough day today,” Sullivan said. “I was kind of emotional, and I just gave everything I could in the water. Sometimes you have to push through those mental and emotional challenges or use them to have a better race. I’m really glad I was able to overcome that and use it to my advantage.”

Another National Team swimmer wrapping the meet with multiple wins was Isabelle Stadden. Stadden won the 100m backstroke last night, and then followed that up with a win in the 200m back tonight in 2:08.67. Sydney Pickrem of Canada was second in 2:13.17, followed by Taylor McCoy of Cougar Aquatics in 2:14.46.

Stadden will be competing in the 200m back in August at the Pan American Games in Lima, Peru.

“I think I took it out a little faster than I normally take it out, which I think helped me in the long run,” Stadden said. “It’s just a fun race to race.”

Two members of the U.S. National Team who will be competing July 21-28 at the FINA World Championships in Gwangju, South Korea won the men’s and women’s 100m free Saturday.

Mallory Comerford took the women’s 100m free in 53.90, followed by Worlds Teammate Kelsi Dahlia in 54.56. Julie Meynen from Luxembourg was third in 54.63.

Comerford will be swimming this event at Worlds.

Michael Chadwick won the men’s 100m free in 48.70, with Cristian Quintero of Venezuela and Peter Holoda of Hungary finishing second and third in 49.43 and 49.46.

“Great swim,” Chadwick said. “Always happy when I break 49 [seconds]. I think this meet is the perfect time for this time of year – three weeks out from leaving for [World Championships] training camp and about a month away until racing. It’s a perfect time.”

“I wanted to go out with a bang for the week,” Fischer said. “I felt great after last night. I recouped and recalibrated myself and was ready to start again today.”

Here are the updated standings for the TYR Pro Swim Series 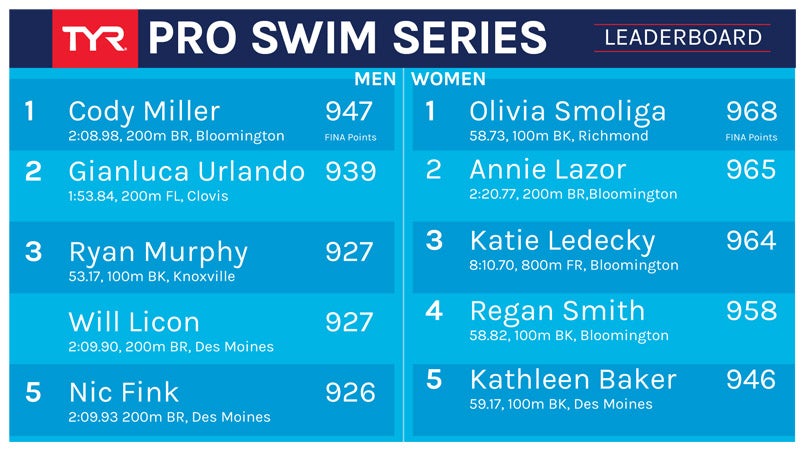