Despite having a parent who is a two-time Olympian and Olympic champion, there was a time when Katharine Berkoff (recognize the surname?) wasn’t a very good swimmer.

Granted, that was in her early days in the water, but with a gold medal bloodline, the expectations for her (and older brother, Cale) to experience the same level of success as their dad, Dave, may have been premature.

“I started really young – 5 – and wasn’t anything special, 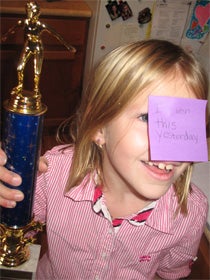 but a few years later, around 8, I started caring about swimming,” said Berkoff, a high school senior from Missoula, Mont., and one of the top swimming recruits in the country. “When I first started, I didn’t like it very much – especially practice – but my parents didn’t force me to keep doing it. It was my choice to keep swimming.

“Once I realized I wanted to swim faster, be better, I started to see a difference. I never felt pressure from my parents; any pressure I felt came from me. I wanted to live up to what my dad did – but I wanted it for me. Not for him or anyone else.”

An incoming member of the North Carolina State recruiting class this fall, Berkoff is excited for the next few months of her final year of high school as she swims through a severe case of senioritis.

Her time in Raleigh will begin after a busy summer that includes a spot on her first senior international team when she travels to Naples, Fla., to compete at the World University Games (WUG).

One of the top sprint backstrokers in the United States (and world) – following in the footsteps of her dad, who medaled in the 100 backstroke at both the 1988 (silver) and 1992 (bronze) Olympics and held the world record for three years from 1988 to 1991 – Berkoff said she is confident in her future opportunities based on the experience and success she’s had over the past few years.

Last summer at Phillips 66 USA Swimming National Championships, she finished fifth in both the 50 and 100 backstroke events – earning an invitation to WUGs.

Following Philips 66 Nationals, she competed at 2018 Junior Pan Pacific Championships – winning silver (100 back) and bronze (200 back) medals. She also swam on two relays that would have medaled if not for the Pan Pacific format that places a one medal limit per country on relay medals.

But as was stated before, Berkoff’s current path to becoming a top contender to make the 2020 Olympic team next summer had a bumpy start.

Coached by her dad for most of her younger years in the pool, she realized over time how important swimming was in her life.

It was at Western Zones more than five years ago when a pre-teen Berkoff predicted a 100 backstroke victory – and then made good on her pledge.

Since then, it’s been an upward stroke toward her ultimate goal.

“She was not very good when she was a young swimmer, but she loved swimming and being part of a team from day one,” said Berkoff, who coached his daughter at Missoula Aquatic Club up until a few years ago.

“I think I knew that she was going to do amazing things when she won at the Western Zones 100 back when she was 12. She was seeded 32nd, and when I asked her what her goal was, she said matter of fact, ‘I’m going to win.’ She dropped 7 seconds and won. I’ve never doubted her since.”

Doubt is something that may have once been at the front of Berkoff’s mind but not any more.

She said now when she takes the blocks – no matter the competition – she believes she can compete with anyone.

She may not always win, but she said she knows she always gives 100 percent (and then some) because she has her goals in mind and has outlined what she wants to accomplish.

It’s one of the major reasons she selected N.C. State as her swim home for the next four years.

“I love the combined program at N.C. State – where the men and women train together and push each other every day to be better; that’s what I’m used to at my club and have been used to my whole swimming career,” said Berkoff, who said she grew up playing with her dad’s medals

“I took several (college) visits (during recruiting), but I felt the most at home at N.C. State. I felt an instant connection with Coach Braden (Holloway) as well as all of the other coaches. The team was super welcoming, and the guy’s and girl’s teams get along really well.”

Taking the next steps necessary to match her dad’s achievement of being an Olympian (and Olympic champion) are at the forefront of Berkoff’s focus and plans.

And even though the meet is still more than a year away, she said she has already established her goals and is working toward them – hoping to swim her best next summer in Omaha.

“I swam at 2016 Trials, and had a great time, but I honestly didn’t think I was ready to really contend for a spot on the team then; it was more about gaining meet experience,” said Berkoff, who finished 36th in the 100 back and 50th in the 200 back at Trials and eclipsed her idol, Missy Franklin’s, meet record two weekend ago at 2019 Speed Spring Sectionals in Federal Way, Wash.

“But this time around, my expectations will be much different. I feel like I am in a much different position this time, and I will be expecting better times and results. I’ll only be 19 next year, and that’s pretty young, so if I don’t make next year’s team, I know I’ll be right there four years later.”

She said having a dad who’s been where she is now and where she still wants to go has been a true godsend.

He gives her regular advice and mentoring to complement her strong work ethic in the pool, and while she said she’s glad he’s no longer her coach (it started to affect their relationship as she got older), she always finds immense value in his words and thoughts.

“When I was younger, I didn’t always want to listen – that rebellious teenage nature – but now I truly value what he says. He knows how much I want to be an Olympian, so he’s doing whatever he can to help me get there. Now, I really listen.”