Tomorrow is Gianluca Urlando’s 17th birthday, and even at this young age, he’s already well on his way to fulfilling a longtime dream.

As a young boy just starting out in swimming, the high school junior – who has already committed to swim for Jack Bauerle at the University of Georgia next year – dreamt of one day swimming at the Olympic Games.

But as far as he’s concerned, he’d just as well get it accomplished earlier than later.

“Considering I didn’t even make Trials cuts in 2016 and now I’m in the conversation to potentially make next year’s Olympic team says a lot about how far I’ve come and how much can be accomplished with hard work,” he said. “But even if I don’t make next year’s team, I know I can try again in 2024 and even after that.”

Urlando’s rise to National Team status – he finished third in the 200 butterfly at 2018 Phillips 66 USA Swimming National Championships to earn a spot – has been meteoric without a doubt.

Part of that is in his age. He only started swimming year-round in 2013 and was only 14 a few months heading into 2016 Olympic Trials.

He hadn’t matured enough to swim at the highest level although he was definitely on the right swimming path.

Now, after last summer’s great swims at Phillips 66 Nationals, Urlando said he’s looking forward to continuing to get stronger, faster and more seasoned as a competitor with a big summer ahead and next summer on his radar.

“Swimming as well as I did last summer at Nationals was 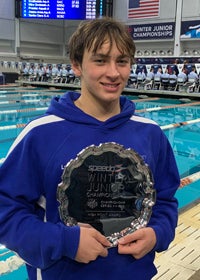 definitely a surprise,” he said. “It was unexpected, although I was expecting to drop time – just not as much as I did. It was definitely my goal to make at least one final, but finishing third and making the National Team was huge.”

Urlando said he had amped up his training, particularly in the butterfly, leading up to Phillips 66 Nationals and focused his training on long course to be prepared for the meet’s format.

He was seeing steady time drops in practice and at meets but said he experienced a sudden, dramatic drop of 7 seconds in the 200 fly leading into Nationals.

“That definitely let me know I was capable of swimming fast and competing well at Nationals,” he said.

Later that summer, Urlando won four events – including both the 100 and 200 butterfly races – at the 2018 Junior Pan Pacific Championships in Fiji.

Before both Phillips 66 Nationals and Junior Pan Pacs, he represented the United States at the 2018 Mel Zajac Jr. International, where he posted five top-three finishes.

Suffice it to say, last year treated Urlando well – but as far as he’s concerned, he’s just getting started.

“I love the pool – I’ve always loved the pool – ever since my mom introduced me to water when I was a baby,” said Urlando, who’s mom, Milissa, swam competitively. His father, Alex, who emigrated from Italy as a teenager, threw the discus. “It’s where I feel most comfortable. It’s my home away from home.

“I’m really looking forward to this summer and getting better and more competitive. I want to make sure I’m prepared as best as I can to chase my dream next summer. But this summer is first.”

While he was invited to compete for the United States this summer at the Pan American Games, Urlando and his coach, Bill Doughty at DART Swimming in Sacramento, Calif., decided to bypass the meet so he could compete against the world’s best juniors at FINA Junior World Championships in Budapest, Hungary.

Together, they determined it was in Urlando’s best interest to compete far from home in one of the fastest pools in the world in front of a big audience – all so he’ll be ready to compete against the best in the United Sates next year at Olympic Trials.

“Once you reach a certain level of time performance, you need to learn to deal with the pressure of expectations, and this is what I’m working through now,” said Urlando, who will also swim this summer at Phillips 66 Nationals. “I swim for myself, but there is definitely more pressure to succeed now than there was a year ago.