A Look Back at Wayne State's One-Point Victory at the 2012 NCAA Div. II Championships

The NCAA Division II Swimming and Diving National Championships will be held March 13-16 in Indianapolis. In recognition of the competitiveness of this meet, Splash writer Tom Slear recounts the story of Wayne State University’s one-point win over Drury in 2012. It was one of just three one-point margins since World War II in any NCAA swimming and diving championship, whether Division I, II or III.

For more information about the NCAA Division II Swimming and Diving Championships, go to ncaa.org.

“One Team, One Championship, One Point”

That’s what the T-shirts worn by the women swimmers and divers at Detroit’s Wayne State University proclaimed after they won the NCAA Division II national title in 2012. Their win is the latest of only three one-point margins since World War II in any NCAA swimming and diving championship, whether Division I, II or III. (There have been no ties or wins by a fraction of a point.)

Small wonder. With some 4,000 points in play, a one-point differential is less likely than a May snowstorm. Each time, curiously, a dominant team with a long-standing streak was upset. In Division I in 1974, the University of Southern California men halted Indiana’s run at six consecutive NCAA titles, 339 - 338. In 2011, the Denison men beat Kenyon, 500 ½ - 499 ½, to become the first non-Kenyon men’s champions in Division III in 31 years. And then there was Wayne State’s improbable win the next year.

Stunning is a more apt description. Drury, from Springfield, Missouri, had won the Division II women’s championship the previous three years and eight times in the prior 15 years. Wayne State was second from 2009 through 2011, but never closer to Drury than 95 points. The Wayne State women arrived for the meet in Mansfield, Texas, with 12 athletes (nine swimmers and three divers). Drury had 17.

“I don’t think any of us thought we could win,” says Kayla Scott, a Wayne State sophomore that season who would figure mightily in the meet’s outcome. “Drury had been so dominating. We just thought they would win again.”

That mindset fit perfectly into Wayne State head coach Sean Peters’ approach. His thoughts, at least the ones he shared with his swimmers, were about performance, not points. He viewed success not by how swimmers did against others, but how they did against themselves. He never mentioned place. Near-victory was a best time. Total victory was a swim that demonstrated full potential.

“He never talked about point values and he still doesn’t,” says Catherine Leix, one of Peters’ assistants who was a fifth-year senior in 2012 and raced 4,250 yards over the four-day meet. “If he scored out (the 2012 NCAA’s), he never told us. He didn’t want someone to do their best and then feel it’s not good enough because of the place.”

Out of sight of his swimmers, however, Peters was assiduously scoping out the meet. The numbers told him that both Drury and University of California San Diego (UCSD) would be formidable. His swimmers would have to do well top to bottom and still have a good bit of luck thrown their way. One day a couple of weeks before leaving for Texas, Peters crumpled a Jimmy John’s bag and aimed a jump shot at a trash can 20-feet away. He did this often and was well known as a bad shot.

“If I make this,” he told an assistant, “we’ll win the national championship.”

Nothing but net. Maybe, just maybe…

Swimming And Diving, Not Just Swimming

The preliminaries the first day (the DII championships, unlike DI and DIII, consist of four days of preliminaries and finals and include a 1000 free on the first day) went about as expected. The excitement picked up afterward with the three-meter diving. Wayne State had three entries. Drury had one. UCSD had none. From the hotel, Peters texted diving coach Kelly LaCroix every few minutes and got no reply. Just about when he thought his head would explode, LaCroix responded. All three made the A final. Drury’s diver was out of the running. Peters did a mental cartwheel. Like all other college coaches, he knew many so-called swimming championships are won with diving. Carly Sevald would go on to win the three-meter. All three would be top-eight in the one-meter. They would outscore Drury in diving, 90 – 14.

“I will forever love those three divers,” Peters says. “They have a special place in my heart.”

Another special place in his heart is reserved for Leix. She felt pain in a knee during dryland early in her junior year. It progressively worsened and ultimately ended her season. She was mortified. A 5:18, 500 freestyler in high school, she had dropped 20 seconds over her two seasons at Wayne State. Following surgery, she knew recapturing that kind of magic was a roll of the dice. Nevertheless, she got back to her best times during the 2011 season and by 2012 she was swimming better than ever.

“If she doesn’t have a knee problem, we don’t have her in 2012,” says long-time assistant Bryce Pitters, referring to arguably the most prominent what-if that went Wayne State’s way. “And without her, we don’t win the meet.” 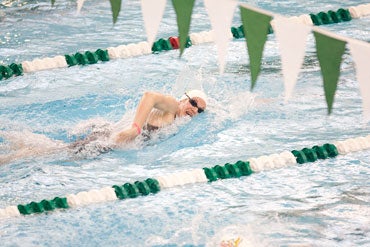 “Without a doubt, she was the leader of the women’s and the men’s team (which finished 7th),” says Peters. “She was the voice in the huddle.”

A Bit of Luck and Then Some

The luck Wayne State needed came in the 200 medley relay at the end of the first day. UCSD finished first but was disqualified after a swimmer left early. Wayne State moved into first place and Drury into second. The DQ not only put UCSD out of the running, it also gave Wayne State six points over Drury instead of just two.

On the third day before the 500 free final, Peters stepped out of character and talked to Leix about the score. “I think we can win this,” she remembers him telling her. “I need the most out of you.”

Leix was caught a bit off guard. True to Peters’ philosophy, she hadn’t been thinking about a team title. She was focused on doing her best. Regardless, the exception to policy paid off. Leix dropped her time nearly five seconds from the preliminaries and moved from sixth to third. Two events later, Scott won the 100 breast. The divers did their part in the one-meter, and the 800 relay, helped significantly by Azambuja, who had the fastest split in the race despite leading off, took first.

Wayne State’s lead over Drury jumped to 55 points. Drury’s long-time coach, Brian Reynolds, approached Peters and conceded defeat. Peters nodded politely, but he didn’t buy any of it.  Reynolds was too used to winning to roll over. What’s more, the fourth day had no diving for the women. It would be Drury’s 16 swimmers against Wayne State’s nine, each of whom had swum a lot of races over the previous three days.

The morning of the final day went well for Wayne State. Gloria Martinez Perez, a sophomore from Spain, qualified fourth in the 100 free, which was expected, but junior Ashley Corriveau, who like the overwhelming majority of the Wayne State swimmers was a Michigan resident, qualified eighth, which was huge surprise.

“Looking at the psyche sheet, we thought she might be top-16,” says Peters. “We were hoping for miracles the last day and we kept getting them.” 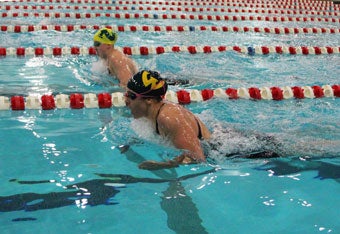 Another miracle was Scott making the top-eight in the 200 breast. She had an uneasy relationship with any race over 100 yards and recalls that her first thought after her preliminary 200 breast was, “Oh my gosh, I have to swim this race again.”

The third miracle happened that night when Azambuja dropped her time over two seconds from the preliminaries to win the 200 back.

“She went up against Alex Henley (from UCSD), one of the best swimmers in Division II,” says Peters. “We didn’t even think about a win, but we knew we needed her to win for us to win the national championship.”

Wayne State had a nine-point lead going into the final event, the 400 free relay. Drury was the overwhelming favorite in the event. If Drury swam as expected, Wayne State would have to finish at least third.

“Get to the Wall”

After the first leg, Wayne State was seventh. Then Perez had what turned out to be the fastest split in the event to move Wayne State into first. After Scott’s leg, Wayne State was third, just ahead of Ashland, whose anchor, Julie Widmann, placed third in the 100 free.  Wayne State’s fate was in the hands of freshman Kei Cze Prentis, whose only freestyle in the meet was on the 800 relay.

Over her first 50, Widmann narrowed the gap with Prentis by a second. After the third turn, Prentis was still leading, but Widmann was getting uncomfortably close.

Prentis held on. Wayne State women were national champions by the slimmest of margins.

“Every single girl had to do her part,” Leix says. “That’s what a one-point win means.  I was incredibly proud to be part of that team.”