During his competitive swimming days, Darian Townsend never shied away from a challenge.

His hard work and dedication resulted in Olympic gold as well as several other international medals for both his birth country, South Africa, and his newly adopted country, the United States.

But even with all of those accolades, nothing prepared him for his current challenge: fatherhood.

“My life outside of the pool has changed dramatically and for the good,” he said. “I got married to my wife, Claire, in April 2017, and we now have a 3-month-old baby girl named Ella. Being a Dad is amazing, but at the same time challenging me in ways I am still getting used to.” 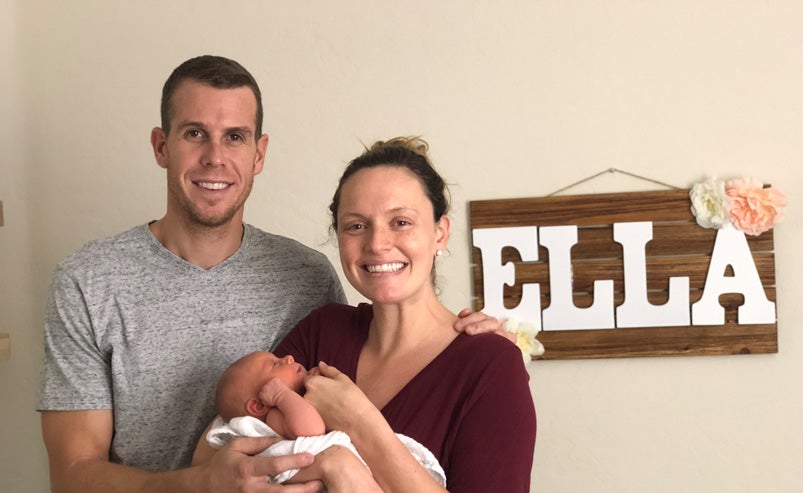 In addition to his new roles as husband and father, Townsend remains involved with the sport he’s loved since he was a young boy to lead the YMCA Westside Silver Fins Swim and Dive Team in Goodyear, Ariz., as the head coach.

He oversees the day-to-day operations of the swim club as well as coaches the elite swimmers.

He said while his time since retiring from professional swimming in early 2017 has been good, it’s taken him a while to get used to not always being in the mindset of a competitive swimmer.

“I find myself still thinking about when my next practice is and having my body ready for that practice,” he said. “When you've done something for 28 years, I guess it's hard to change the way you think.”

Townsend said his decision to retire was based on several things. For one, he had reached the point where he was tired all the time and needed a long break from the day-to-day schedule he had been following for years.

Finances were also a big part of his decision, as he and Claire wanted to buy a house and start a family so getting a full-time job was a necessity.

And then, with that full-time job, training as much as he would need to remain competitive at the highest level became tough, so something ultimately had to give – but he hasn’t given up swimming altogether.

“I am still competing on the Masters circuit, although not as much as I'd like,” he said. “Swimming is still my favorite form of exercise, and I try to get in the water as often as possible. I feel staying in touch with the water keeps me more in touch with the sport and helps me to be a better coach for my swimmers.”

Townsend’s introduction to swimming came from both of his parents having been swimmers growing up. They both still compete in open water events in South Africa and love the sport – so it was inevitable that he would also love the sport growing up around a swimming pool and joining his first club at age 7.

For him, swimming was the one sport where he felt he had total control of himself. He enjoyed playing team sports, but when he was swimming, he said he felt he could control his destiny.

It was that feeling that kept him coming back to the pool every day.

“When I got a little older, I realized what I could do with the sport,” he said. “I realized I could travel, get an education, make money and meet friends, and so I became obsessed with becoming the best swimmer I could.

“There were times when I took the sport maybe too seriously, but I was lucky to have a family that helped me through those times and kept me grounded.”

His first real memories of the Olympics were the 1996 Atlanta Games when he watched on TV from South Africa and was amazed at how fast the swimmers were.

But it was during the Sydney Olympic Games when he became heavily motivated to become an Olympian.

“It took me a few years to discover how hard it was, but I knew deep down that I was going to make it there,” he said. “It was that belief in myself that ultimately got me there.”

A member of South Africa’s 2004 Olympic team – winning gold as a member of the 400 freestyle relay and setting a world record in the process – Townsend said that was a definite high in a career that had many ups and downs.

For two years post- Athens, he said he really struggled with swimming and life. He started college at the University of Florida, and it was tough for him to adjust to a new way of life in a foreign country.

After two years of struggling mentally and physically, he found a new home in Tucson, Ariz., at the University of Arizona and was able to bounce back and broke the world record in the 200 individual medley.

“I think it was the struggles I went through and then to come out at the end on top that I am most proud about (in his career),” he said.

After living in the United States for so many years (despite continuing to compete for South Africa), Townsend said he slowly found himself becoming Americanized and decided in 2013 to switch nationalities to the United States. He became a naturalized citizen in 2014, and soon after was given clearance to compete internationally for his new country.

He quickly made the first of his two U.S. National teams and competed for the United States at Short Course World Championships in 2014 – winning five medals, two gold in Doha, Qatar – and the 2015 Pan American Games (silver and gold medals) in Toronto.

And even though he never fulfilled his dream of swimming for the United States at the Olympics, Townsend said he has never doubted his decision to change countries.

“Even though it was just shy of two years that I was on a couple National teams, the experience I had being a part of the most dominant swimming nation was unforgettable and I will always cherish those memories,” he said.

“I learned so much from the sport of swimming.

“Swimming taught me to never give up, and I use that every day in my career and personal life. No matter how tough something is, if you keep working at it and don't give up, you will succeed. But most importantly, because of swimming, I have a family, an education and a job. There's nothing else I wish for.”