Just as Bob Bowman will be connected to the amazing career he helped Michael Phelps attain in the pool, Todd Schmitz knows that he will be forever linked to his start pupil Missy Franklin.

After all, the two worked together from the time she was 7 when she showed promise as a young member of the Colorado Stars through two Olympics and five gold medals.

“She definitely made me step up my game every day,” he said. “All the people that said I couldn't do it without a long course pool, etc., made me work harder to prove them wrong.”

When asked about his early memories of Franklin, he said he remembers that she was taller than everyone else in the Starfish group, always had a smile on her face (along with that infectious personality and spirit the world came to know and love) and she loved to race.

And while at that time he couldn’t have foreseen all that they would accomplish together in the pool as coach/swimmer, he said once she earned notoriety through her swimming – the best in the world for several years in the early 2010s – he discovered his own limits of acceptance.

But ultimately, he found a perspective that allowed him to appreciate the natural Todd Schmitz-Missy Franklin connection and realize his role in the whole experience and outcome.

“Early on, it would often bother me being called Missy Franklin's coach instead of Todd,” said Schmitz, who also coached Franklin to six gold medals at the 2013 World Championships.

“But with age comes wisdom, and I am honored to be 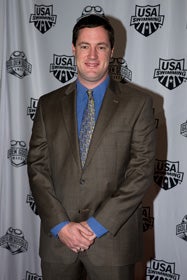 mentioned with Missy Franklin's name. She is a five-time Olympic gold medalist and stills holds the world record in the 200 Back. What’s not to be proud of?”

But anyone involved with the sport of swimming knows that Schmitz’s success goes deeper than his most-well-known student.

Schmitz grew up “fortunate” to have a swimming pool in his family’s backyard, and said he could swim before he would walk.

A four-year letter winner and all-conference swimmer for Metro State University of Denver, he relies upon his own experience as a competitor to relate to his swimmers while also coaching them.

His foray into coaching actually didn’t start in swimming. He began his auspicious career coaching baseball and softball when he was 15.

“I really enjoyed working with kids,” he said. “I never would have guessed it would turn into my passion.”

He made the natural move over to coaching swimming, and he’s never stopped.

Schmitz also served as the co-chairperson of Age Group Swimming for Colorado Swimming, Inc. from 2005 through 2008 and was a member of USA Swimming's Convention Education Committee through 2013.

Throughout his journey, he said at the core of his coaching, he believes swimming needs to stay fun no matter the age of the athlete – and that definition of fun should evolve from external motivations to internal desires as the athlete matures.

Some of his early coaching role models include Eddie Reese and Jack Bauerle. He said both have been very kind to him and been great mentors, along with Mike Dunlap, the head men’s basketball coach at Metro State University when he was a student athlete.

“I really want to emulate the way they connect with their athletes and the way that they care about each athlete,” he said. “I love watching kids achieve their goals and to challenge themselves to step out of the comfort zone. I celebrate a first-time state cut as much as a first-time National cut.”

And while he said he has worked hard to uphold his own personal coaching style and philosophy, he knows that he always needs to be evolving in everything that he does.

“It (coaching philosophy) is constantly evolving for sure,” he said. “Teaching athletes life lessons thru swimming and making them challenge themselves on a daily basis never changes.

“I am always trying to mix it up in workouts, and also changing practice times to get better attendance, etc. I continue to teach life lessons thru swimming each and every day. I still enjoy it.”

And just like there will never be another Phelps, Schmitz said he knows Franklin is one-of-a-kind – but that will never stop him from helping develop that next champion.

“I am always watching all of my athletes to help each one of them reach their goals and dreams,” he said.