The Super Bowl is Over, but Swim Season Never Ends for Two Members of Sunday Night Football Crew

Two of the top decision-makers from the NBC Sports football broadcast crew are pooling their mutual interest in swimming, to the benefit of both sports.

Producer Fred Gaudelli and director Drew Esocoff are the leaders of NBC’s wildly successful Sunday Night Football, which has been the top-ranked television show in America for 10 straight years.

Both perennial Emmy winners say their shared interest in swimming has been a key to their current well-being. They each got an eye-opening exposure to swimming starting with the Beijing Games, which included Michael Phelps’ astounding eight-gold-medal performance.

“I’d say I got my first little spark of interest then,” said Esocoff, 61, who was involved in leading that memorable 2008 Olympic coverage and later the 2012 London effort. “You can’t help but be impressed when you’re surrounded by that caliber of athlete.”

At about the same time, Gaudelli, 58, was preparing for surgery on a torn rotator cuff in his shoulder. His doctors recommended swimming as one strategy for strengthening the muscles in the area, thereby reducing the total amount of time needed for post-surgery rehab.

Instead, aquatic exercise proved to be a winning preventive prescription. Gaudelli started slowly at his neighborhood pool, the Madison Racquet and Swim Club in Madison, Conn. To everyone’s surprise, his shoulder pain soon left completely and allowed him to postpone surgery indefinitely.

“The rotator cuff tear is still there,” said Gaudelli, “but the doctors told me the muscles had been built up enough in that area to compensate for it.”

Esocoff, too, sought swimming as a kind of remedy after a ruptured Achilles’ tendon forced him off the basketball court and into the pool for good. He says one key for him was having a great opportunity to learn all about his new sport at the Wilton Family YMCA in Connecticut.

“At Wilton, you have no excuses,” Esocoff said. “The pools are there, the coaches are there and everybody’s just so into it. Even when the schedule says the pool is closed to lap swim, they’ll always find a way to let you have a lane.”

As both men immersed themselves in their new aquatic pursuits, they found a certain synergy. Their travel for Sunday Night Football regularly places them in the same circuit of NFL cities, and that has led them to seek out reliable swimming opportunities in those towns.

Gaudelli says they always try to book hotels with adequate pools for lap swimming. And if that’s not an option . . .

“We’ve been to YMCAs, colleges, Jewish Community Centers, you name it,” Gaudelli said with a laugh.

Among their favorite NFL towns, from a swimming perspective, are Dallas, Houston, Kansas City, Green Bay and Nashville.

A recent trip to the Seattle Athletic Club has both thinking about upping their training ante.

Hoping for some pool time there, they were informed they’d need to join a scheduled Masters practice, complete with tough intervals and detailed structure, in order to get in the water. They broke their huddle and embraced the challenge, and ended up rewarding the coach with tickets to a Seahawks game.

“Truth be told, I’m just a very average workout swimmer,” said Esocoff. “When I was getting started, Rowdy (Gaines) sat me down and said, ‘If you’ve got 45 minutes, just do as much as you can and don’t worry too much about intervals and the more complicated things you can do. Just swim – so that’s what I’ve been doing.”

Gaudelli reports that he’s become very regular in his practice regime. He’s got a normal range of between three and six practices per week. And on those rare occasions when life gets in the way and he’s left without a practice slot, he hears about it. From himself.

“If I have to go five or six days without getting in the water, my body starts yelling at me, ‘Go Swimming!’ ” Gaudelli said. “That’s when I know I’ve really got to find some water.”

The Time is Right

Both Gaudelli and Esocoff still play golf frequently but have left behind some of the higher-impact land sports.

“Those are great when you’re in your 20s,” he said, “but I think I was in four different pick-up basketball games where guys blew out their Achilles’. So then in their 30s, people tend to switch to the Stairmaster or lifting weights, and that’s fine.

“But the great thing about swimming is you get that cardio and resistance training all in one workout.”

Esocoff considers himself a morning person and felt like he needed to hit the gym by about 9 a.m., or he’d lose his chance for that day. For some reason, though, the idea of some temporary weightlessness is appealing at any time of day.

“Even if it’s 4 in the afternoon, the idea of hitting the pool for an hour always sounds good to me,” he said.

For Gaudelli, the sheer efficiency of swimming is enough to make him a firm convert.

“As you get older, two things tend to become hard to come by – flexibility and time,” Gaudelli said. “Swimming’s great for both of those.”

NBC’s close ties to USA Swimming, and its dedication to the Olympics, has affected the on-air portion of Sunday Night Football as well. 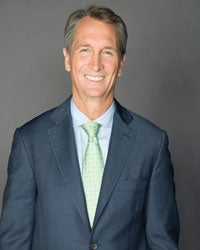 SNF color analyst Cris Collinsworth frequently swims, and he benefitted from having a top-notch mentor during the Beijing Games- Rowdy Gaines. While he was part of NBC’s Olympic coverage there, Collinsworth successfully completed his first flipturn under Gaines’ supervision.

NBC’s partnership with USA Swimming has been a boon for both entities, helping deliver ever-higher viewership from coverage of the U.S. Olympic Trials and the Games themselves. NBC has Olympic rights through 2032, so expect that relationship to flourish.

Esocoff and Gaudelli take some pleasure in knowing that they’re more advanced as swimmers than Collinsworth, a Pro Bowl receiver with the Cincinnati Bengals in the 1980s.

“Don’t get the wrong idea,” Gaudelli said. “Cris is such a phenomenal athlete. With a guy like him, it’s a just a question of how much time he wants to put into it.”