Goggles for Guppies Continues to Change the World

When his twin sons, Chris and Matt, felt compelled to start an organization in 2011 that provided swimming essentials to kids in poor communities inside and outside the United States, Michael Hales never thought it would still be thriving 7-plus years later.

In fact, the early going was so difficult and disheartening for everyone – especially the boys – that Goggles for Guppies (GFG) nearly folded.

But now it’s going strong – even expanding its reach and impact – and continues to change the world in a way no one ever envisioned.

“I don’t think any of us felt that Goggles for Guppies would last,” Michael said. “In fact, the first several months were really disappointing because none of the hundreds of retailers and none of the manufacturers Chris and Matt reached out to would call us back.

“Creating the website helped, but I think no one believed that a couple of 12-year-old boys could be taken seriously. The partnership with Make a Splash and the USA Swimming Foundation really helped as it gave Goggles for Guppies the initial credibility it needed.”

The concept for Goggles for Guppies started in August 2011 when the boys were at a swim meet in Mexico.

Realizing not everyone had access to swim gear and didn’t know how to swim, afterwards, Chris and Matt hand-delivered donated equipment to local YMCAs and Special Olympics.

They both believed what they were originally doing – 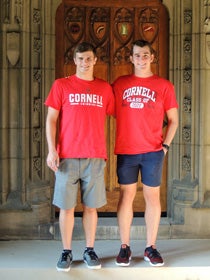 helping disadvantaged families in their local community by providing them with swimming goggles, suits and other equipment to learn to swim – would eventually have a huge impact if they could make the right connections.

Young optimism and naiveté helped them see things a little differently than their dad despite those early struggles.

They believed so strongly in the mission of Goggles for Guppies that they were confident they could positively impact more than just poor children in nearby communities.

“As a 12-year-old, your world seems very small, but once we created Goggles for Guppies and realized the widespread impact we were having on children across the country, we were shocked at how we have been able to change the lives of so many underprivileged kids,” said Matt, now 19 and a freshman at Cornell University. Chris is studying Computer Science, and Matt is studying Electrical and Computer Engineering in the College of Engineering. Matt just finished his first semester on the Cornell men’s swim team, but Chris no longer swims competitively.

“We never expected to grow internationally, and we’re incredibly grateful to be able to help prevent drowning of children in distant countries. We never thought that we would have such overwhelming growth, and we are beyond grateful to have been able to work together and help those in need, regardless of where they live.”

Since those early struggles and doubts, Goggles for Guppies has grown dramatically in its reach and connections within and around the swimming world.

In 2012, GFG partnered with the USA Swimming Foundation and the distribution network immediately grew to all 50 states. Two years later, GFG was contacted by a humanitarian group from Abilene, Texas, to provide suits and goggles for their annual water-safety mission to Uganda.

And in 2017, the organization provided 200 suits to the Beninese Swim Federation to support water safety in the African country of Benin. GFG has also provided suits and goggles to humanitarian programs in Haiti and Guatemala.

The organization – largely being run by Michael while the boys are in a very regimented academic setting at Cornell – has established relationships with manufacturers such as FINIS, ROKA and Speedo, and retailers like Sport Fair USA and SwimOutlet.com, who donate unsold inventory to Goggles for Guppies.

In addition to Make a Splash Local Partners, GFG also distributes suits, caps and goggles to many school districts, inner-city recreation departments, and international humanitarian organizations such as Swim Benin and Saving Waters in Africa, and agencies in Guatemala and Haiti that are dedicated to fighting the epidemic of accidental childhood drowning.

And these good works haven’t gone unnoticed. Goggles for Guppies was honored at the 2015 Golden Goggle Awards with the USA Swimming Foundation Make A Splash Hero Award, and Matt and Chris were each awarded the Disney/ABC Broadcasting “Cool Kids” award for exemplary community service, the 2016 George H. W. Bush Points of Light Award and the 2017 Presidential Volunteer Service Lifetime Achievement Award signed by President Barack Obama.

Despite this tremendous growth and impact, Michael said the structure of the organization has largely remained unchanged – as has its location.

“It is still being run out of our garage and home office,” Michael said. “We have intentionally kept it that way in order to eliminate operating expenses. All of the time and effort is donated, and the only expense we incur is the cost of shipping.”

Michael said the most obvious impact they see (and often read about through dozens of thank-you emails and letters) is knowing that children who otherwise would not learn to swim because their families simply cannot afford proper swim equipment have become water-safe.

But its more than that.

“We’ve been told of one little girl who had just learned to swim (because of help she received from GFG) saved the life of a toddler who had fallen into a pool and about a South Carolina teenager who started a local learn-to-swim program after losing a high school friend to drowning,” he said.

“We also learned about an African refugee who – deathly afraid of alligators – was given the self-confidence to enter a swimming pool. Then there were the members of swim clubs who lost everything in recent hurricanes that were able to keep training with suits, caps and goggles we provided.”

No longer the wide-eye kids with a dream to help others learn to swim and be safe around water, Matt and Chris said they hope the success of Goggles for Guppies will stimulate other kids to find ways to help those who are less fortunate.

It’s their shared dream to use the knowledge they are learning in college to use computer technology to make the world a better place for all of its people.

At its core, that’s what Goggles for Guppies has always been about and remains a major part of its mission.

“I’m not sure if it was Chris or Matt who said, ‘Fifty years ago, we put a man on the Moon. Since then, we’ve developed the technology to explore distant galaxies and land a rover on Mars. Virtual reality can train pilots and surgeons. We have taught computers how to learn. We have the technology that can eliminate starvation, educate masses and prevent accidental drowning…we just haven’t created it yet,’” Michael said.