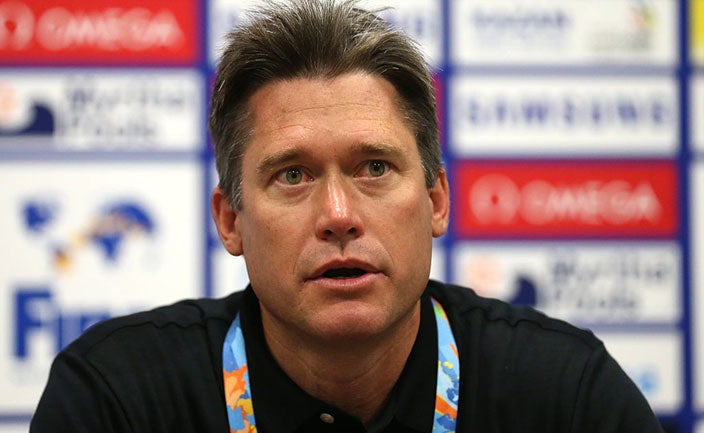 COLORADO SPRINGS, Colo. – Dave Durden and Greg Meehan have a lot to live up to as the newly-named men’s and women’s head coaches of the 2020 U.S. Olympic Swimming Team.

They will be following in the footsteps of some of the biggest coaching legends of the sport – names like Bob Kiphuth, Edde Reese, Skip Kinney, Bob Bowman and Teri McKeever – people who have led the U.S. to 553 medals in the pool over the course of Olympic history.

The honor of joining this prestigious crew is not lost on either Durden or Meehan, who are looking forward to the opportunity to put the 2020 Olympic Team in a position to achieve optimum success in Tokyo.

“I’m excited about this news and extremely humbled,” Durden said. “In working with (National Team Director) Lindsay (Mintenko) and working with USA Swimming through this process, I was able to look back and review historically the coaching legends that have been in this position, and I was incredibly humbled by that list. Just tremendous coaching legends in our sport that have been in this position. I’m excited for this, and as I said earlier, just extremely humbled.”

“It was a moment that allowed for self-reflection and appreciation,” Meehan said. “It’s the greatest honor of my professional career. As that self-reflection and appreciation sort of passes a little bit, I get really excited about the future. I’m looking forward to working with Dave, Team USA and all the amazing coaches and athletes around the country as we prepare ultimately for Omaha as the first step to success in Tokyo for the 2020 Games.”

USA Swimming made the announcement Monday morning. Meehan will be at the helm of the women’s team, while Durden will be the men’s head coach.

The two served as assistant coaches at the 2016 Games in Rio, where their swimmers combined for 20 medals (11 for Durden, nine for Meehan). They also placed 11 athletes from their respective teams to last summer’s Pan Pacific Championships.

Add to this their multiple NCAA Championships – three for Durden’s men at the University of California, and two for Meehan’s women at Stanford – and it’s pretty clear to see why USA Swimming’s four-person selection committee unanimously recommended the young coaches to head the Olympic squads.

“I think what Greg and Dave bring to the table are different perspectives than what we currently have within USA Swimming,” Mintenko said. “They think alike, but also think differently, which is really fun for us. They’re going to challenge us, which we are really looking forward to, and we’re just looking forward to working with them on a daily and weekly basis for the next 18 months as we prepare to set up the best possible environment for our athletes to be successful in Tokyo 2020.”

The two appeared in a video press conference Monday to talk about the honor, and about their plans heading into 2020. Here are a few questions from the conference:

What kind of pressure are you under to continue the legacy of success for Team USA at the Olympic Games?

Meehan: It’s an enormous responsibility. I don’t know if pressure is the right word, because as coaches, we continually put pressure on ourselves to be successful in this arena. There’s an added amount of responsibility given that it is on the international scale, and we are part of a much larger legacy within USA Swimming at the Olympic Games, but we’re excited more than anything else. As we both touched on, we’ve had great examples, and we’re going to lean on coaches of Olympic Games over the last few quads, and on their experience and guidance as well, to help move forward.

Durden: It allows us to have a lot of responsibility to continue the tradition. I think any time you have that, we look to the leadership before us. Between myself, Greg and Lindsay (Mintenko), we’ve already gotten to work on this a little bit, and reached out to both Bob (Bowman) and David (Marsh), our previous head Olympic coaches, to find some secrets for our success in Rio. I think it’s a pressure – if you want to use that word – that is shared amongst our great coaching community in the U.S. That’s something we all stand shoulder-to-shoulder with as coaches, and really look toward Tokyo 2020 as a competition where we want to be successful. We’re excited about that, and at the same time looking at the folks who have come before us and their success to help us guide this team going forward.

Where do you see the national team evolving as we lead up to Tokyo?

Durden: I think it is going to be a combination of some new faces like we experienced in 2016, along with some veteran leadership of some athletes who have had success at an Olympic Games or multiple Olympic Games. That’s always been a successful mix for us.

We have great international opportunities (in 2019), between the World Championships, the World University Games, and the Pan American Games that are going to prepare our athletes for the Olympic stage in 2020. I think we take those different experiences and pull them together as a team moving through the pressure cooker that is our 2020 Olympic Trials, and once you get through that grind, I think it really sets the character and the personality of our team going forward into Tokyo.

Meehan: One of the things that’s really impressive about USA Swimming is the quality of depth. From quad to quad you have your senior members that will continue on from 2012, 2016, 2020 and beyond, and you’re always going to have newcomers. Stars are going to be made over the next two years as the next Michael Phelps or the next Katie Ledecky come in through the system. That’s the one thing that’s always incredibly impressive about USA Swimming. Ultimately, that is kind of the result of really hard-working, talented coaches back at home continuing to help Team USA move forward from quad to quad.

Is there anything you learned from the experience in Rio that will help you?

Meehan: We left the Rio experience with a lot of ‘take-homes,’ as we like to call them, and things we would absolutely want to do again in this next quad, and some things we’d like to do better.  The same as we left the Pan Pacs from this summer of 2018 with some things that we wanted to do better. Ultimately, as the team starts to put itself together at the Olympic Trials in Omaha, that’s when we’re able to put some of those finer things together from a team dynamic perspective. Speaking on the women’s team, some things that we’ll do is continue to get to know each other, continue to come together and inspire each other for great success and winning medals and being as competitive as we can be as a nation. There were some things we did in 2016 that were off-the-charts good, and we want to take some of that with us and tweak a couple of things and make this experience as best as possible for our athletes.

Durden: I think the beauty of USA Swimming is that we have such a great support staff around these athletes, and that starts well before we get to the Olympic Games and Tokyo. The USOC support and what they provide our athletes – not only in an Olympic setting, but in a World Championship setting and a Pan Pac setting – is something we have collectively as a staff… leaned upon. That’s something we’ll continue to do from 2016 into 2020 to have success. But the personality, the characteristics of the team is one that is to be determined.