In a world often difficult for people with hearing and vision deficiencies, Rebecca (Becca) Meyers has found her own world sanctuary in the pool.

There, she can truly be herself – free from the world’s and her own physical complications, judgments and hazards.

It’s a world where sound and sight have no real deficiencies – or limitations.

“I love being in the water; I always have,” said Meyers, who started swimming as a young child when she followed her older siblings to the local club pool. “It’s the one place where I can shut the rest of the world out and just enjoy and relax.”

Born deaf, Meyers went the first 18 months of her life 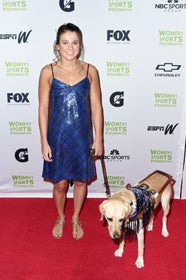 without showing too many signs of her hearing loss. She mimicked her older brother’s and sister’s actions so well that no one really knew until she wasn’t talking much and started not responding to voice prompts.

Shortly after being diagnosed as deaf, Meyers had a cochlear implant which allowed her to hear out of her right ear. When she was 15, she received a second implant in her left ear that gave her full, stereo hearing for the first time in her life.

Meyers started swimming as a 5-year-old because her siblings also swam and she wanted to do everything they did.

“Just like I mimicked them when I couldn’t hear, I mimicked them at the pool,” she said. “I looked up to them so much. I wanted to be like them and do everything they did, especially swim.”

She played other sports, too, despite her limited hearing, but she was also impacted by slowly deteriorating vision caused by Usher syndrome – a rare  generic disorder that results in a combination of  hearing loss and  visual impairment – that caused her lose her balance.

She quickly found her “happy place” in the water and focused all of her attention and energy to maximizing her time there.

It wasn’t long after that she made her first international team, competing at the World Deaflympics in 2009, winning a bronze medal as a member of the 800 freestyle relay and setting an American record.

Since then, she’s been part of the past two Paralympics (2012, 2016), winning a total of six medals – three gold – in the S12-S13 classification for visually impaired swimmers.

This summer, she competed at Pan Pacific Para Championships in Australia, where she won five gold medals and broke the world record in her classification in the 400 freestyle,

Because of her performance, Meyers was awarded the Trischa L. Zorn Award for Disability Swimmer of the Year from USA Swimming.

The award is named for Zorn, the most decorated Paralympian in history with 55 medals (41 gold, 9 silver and 5 bronze) from six Paralympic Games starting in 1980 and ending in 2004. She was inducted into the Paralympic Hall of Fame in 2012

“I didn’t know I was nominated for the award, so it was truly an honor to win this year,” said Meyers, who also won the award in 2016 after taking home three gold medals and one silver from the  Paralympic Games in Rio de Janeiro.

“I try my best to be a good role model for all swimmers – those with a disability and without a disability. So, to be honored with this award means I’m on the right path.”

Linda Conger, who was also honored with the Disabled Swimming Service Award at the United States Aquatic Sports Convention in September, coached Meyers at this summer’s Pan Pacific Para Championships and was on the committee that selected her for this year’s award.

She said although she doesn’t know her all that well, she recognizes Meyer’s dedication to the sport and her accomplishments in the water – which is why the committee chose her for the award.

“Becca definitely doesn’t like to lose; that’s evident every time she races,” Conger said. “She’s a tremendous competitor, and she refuses to allow her visual and audial disabilities to keep her from doing what she loves.

“She proved that this summer at Pan Pac Paras, and her performance there is why we selected her for this year’s Trischa L. Zorn Award.”

While she can’t hear when she’s in the water – she takes out her cochlear implants before she dives in – Meyers describes her deteriorating vision as “looking through two straws.”

On land, she has a guide dog named Birdie who helps her navigate public transportation and other city services, and she lives with her mom and dad for now as she continues to adjust to the changing world around her.

She has no peripheral vision, so when she’s in the water, she follows the black line at the bottom of the pool and measures her strokes so she knows when the wall and turns are coming up.

And while she has learned to maximize her disabilities and live a normal life, Meyers said she remains hopeful that technology will someday reach a level where she can see the world – and the pool – as everyone else does.

“With continued advancements in technology and gene therapies in medicine, I’m very hopeful that before I completely lose my sight (doctors forecast somewhere around her 40th birthday and Meyers will be 24 later this month), I can have the cones and rods in my eyes replaced or regrown to improve my eyesight.

“But I have a tremendous support system around me, so no matter what happens, I know I will be fine and I will still be able to swim. I am so thankful to everything the sport has given me during my career, and I’m equally thankful for my parents who gave me every opportunity to chase my dreams and never let me give up on them even when I wanted to. I’m very blessed.”