National Select Camp Motivates and Challenges Swimmers for the Next Level

This past weekend, USA Swimming hosted the top young male swimmers in the country at its National Select Camp, held at the Olympic Training Center in Colorado Springs.

USA Swimming invited the three fastest athletes between the ages of 14 and 16 in each event to attend the camp, where swimmers experienced the day-to-day routine of a National Team athlete and trained at the U.S. Olympic Committee’s state-of-the-art facilities. 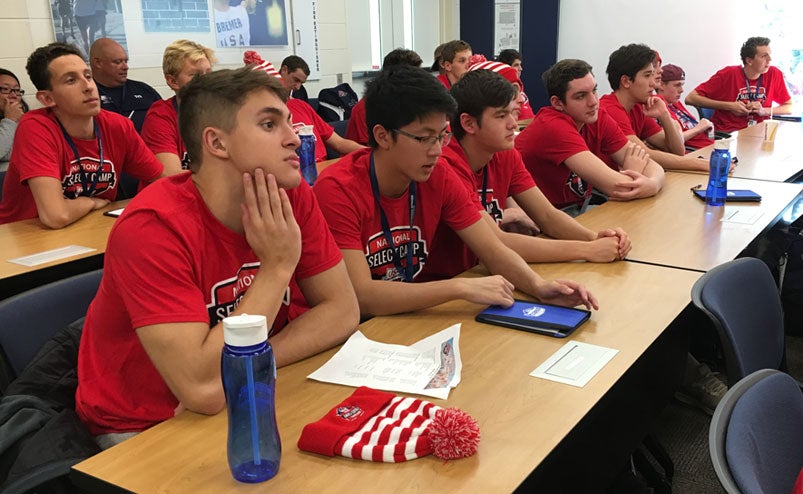 Here’s what some of the campers had to say about the experience:

What’s been the best part of camp so far?

Matthew Styczen, New York Sharks, Pennsylvania: Probably how everything is so team oriented. Everything is all for the USA – all for one and one for all. Everyone’s very motivated to do practice, and everyone’s very helpful, supportive and friendly.

Maxwell Reich, Phoenix Swimming, New Hampshire: Just being around a bunch of people who have the same goals as you and working with them to get to where you want to be is a fun experience, and that’s definitely been the highlight so far.

Andrew Benson, SOLO Aquatics, New Hampshire: Meeting new people, getting to see the facilities here at the Olympic Training Center, and learning a lot of new things at practice.

What’s been the most challenging part?

Reich: Training at altitude. I’m at sea level for training, so coming up has been a huge obstacle. Getting used to the altitude has been something I’ve had to adapt to, but it’s also been a team-building thing, because all of us are going through it together – it’s something we all have to face.

Benson: The altitude, like other people have already said. It definitely makes you think about breathing more. And just getting coached by new people, as well – just getting to see their perspectives on things, but also not having that home feel of your home pool.

What’s the most important thing you’ve learned, and why?

Styczen: Probably teamwork. Coming together as a team, because no matter what, if you have a team, it’s kind of like a support system to help you when you are trying to achieve something great, and if you fail, they’re there to catch you.

Reich: Definitely positivity. With the first practice, it was really tough, because we were all trying to adapt to the altitude, but in our lanes, we were doing cheers, and doing stuff to keep each other positive, and that made it easier to try our hardest and make our times in that practice.

Benson: I’ve learned that, no matter how weak you are, you can still get through it.

How has the camp motivated you to move up to that next level in your career?

Reich: It's definitely shown with the presentations we’ve gotten and the people who have come out of this camp – it’s been motivational to see that this is the first step at getting to our ultimate goal of the Olympics. Being here is kind of proof that what we’re doing is on the right track, and that just makes us want to work harder to get where we want to be. 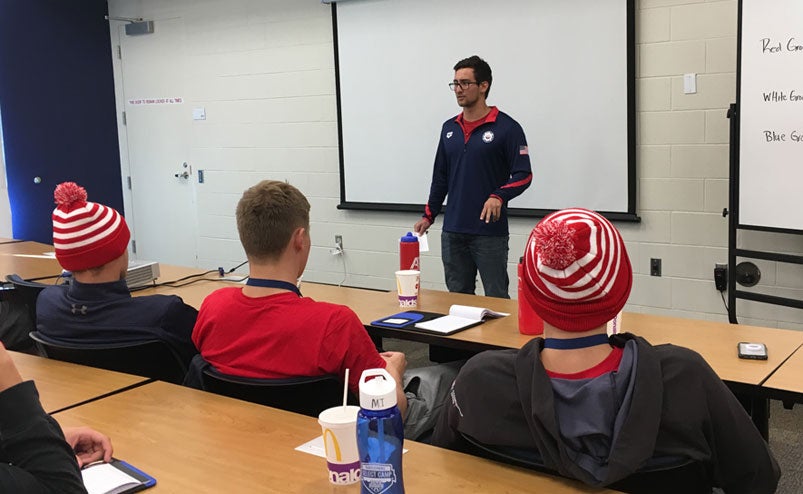 U.S. National Team member Justin Wright also spoke to the campers on Friday. An alum of the National Junior Team program, Wright has attended similar camps at the Olympic Training Center and could relate to the Select Campers’ experience.

Why do you think this experience is important for these guys?

Wright: It’s just really important for them to see all these people as human – all these great swimmers, these National Teamers. It’s really easy to kind of idolize them, but then you hear about their stories, you hear about their journeys, and I think it’s really important for them to hear that, and be able to apply it to their own situations and kind of figure it out for themselves.

What do you think is the most important thing they can take away from this camp as a whole?

Wright: Back when I was doing my first Junior Team trips, I was just a sponge taking in everything I could. I’d write things down. As much information as they can bring back with them, I think that’s at a really, really important factor in their continued success. If you can come to one of these things, and go home and forget all about it, then you probably aren’t going to make it too far as a swimmer.

What’s one thing from your presentation that you really want them to take to heart?

Wright: I always say, “Do it for the little guy.” It’s kind of a funny way to say it. (Wright is 5-7, the smallest man on the National Team). I talked a lot about mental strength, and I think that’s really one of the most overlooked things in swimming right now. Everyone knows to be mentally strong, and to work on that, but how many coaches actually provide the resources to do that? I think as the sport progresses, that’s going to be the biggest key factor for all of these guys. To get to the next level – progressing farther than I’ve gone – all the world records are going to be blown away by guys who are absolute mental warriors.

What do you remember from your experience as a young guy, coming to these types of camps here at the Olympic Training Center, that you used to your benefit?

Wright: I never paid attention to actual stroke that much. Usually the details were something I was lacking in. So being able to see (National Team High Performance Consultant) Russell Mark do all these videos, break down the great analysis of each stroke, that was definitely the biggest takeaway for me, since that was something I never really considered to be something I needed to work on. But it made all the difference for sure.