Golden Goggles at a Glance: Relay Performance of the Year

This award is given to the best team relay performance, male or female. The performance considered must be a finals performance, with special emphasis on the 2018 Pan Pacific Championships. 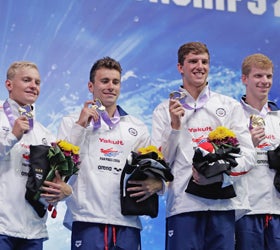 The men’s 4x200m freestyle lineup of Andrew Seliskar, Blake Pieroni, Zach Apple and Townley Haas claimed Team USA’s first relay gold medal of the Pan Pacific Championships in 7:04.36 – just over three-tenths of a second clear of runner-up Australia. The Americans sat in second position throughout most of the first 600 meters of the race before Haas made up more than a second on the anchor to secure the gold medal for the United States. 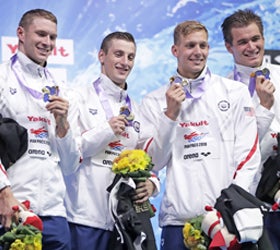 The United States’ men closed the 2018 Pan Pacific Championships in dramatic fashion with gold in the men’s 4x100m medley relay – the final event of the pool competition. The host Japanese held a slight lead over Ryan Murphy, Andrew Wilson and Caeleb Dressel over the first three legs of the relay before Nathan Adrian hit the water for the freestyle anchor. The veteran quickly made up a small deficit and split 47.71 to lift Team USA to gold in 3:30.20 – only five-hundredths ahead of runner-up Japan and just over three-tenths clear of third-place Australia.