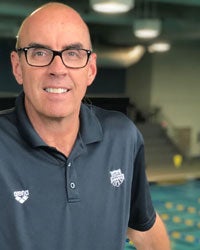 A long time official from North Carolina, Jay Thomas has spent his career officiating for USA Swimming, FINA, the NCAA and the NFHS. During 2010-2014 he served on the USA Swimming’s Board of Directors as a Southern Zone Director and has been a member of several USA Swimming committees and task forces.

Jay is a graduate of Clemson University. He is a retired Commander in the United States Naval Reserve and is now the Regional Developer for Orangetheory Fitness in the Western North Carolina Market.

He is the proud father of two daughters – Barbara a swimmer (UNC – Chapel Hill 2010) currently a Studio Manager for Orangetheory Fitness in Plantation, Florida, and Morgan a volleyball player (USC – Upstate – 2012) currently the Associate Head Volleyball Coach at Texas Tech in Lubbock, Texas.