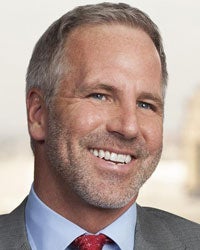 Chris Brearton became involved with swimming, first, as an age group swimmer - inspired by watching Steve Lundquist win gold at the 1984 Olympic Games – and, ultimately, as a college swimmer at the University of Georgia.

Chris currently serves as the Chief Operating Officer of Metro-Goldwyn-Mayer (MGM), one of Hollywood’s oldest and most prestigious studios. Prior to joining MGM, Chris was a Managing Partner of the powerhouse law firm, Latham & Watkins, where he ran the Century City office. Over the course of more than 20 years as an entertainment, sports and media attorney, Chris advised motion picture studios, television and digital networks and sports organizations, (including the International Olympic Committee (IOC) and the NCAA), in transactions including strategic alliances and joint ventures, mergers and acquisitions, licensing and distribution arrangements and complex financings.

He is a member of the Board of Directors of the LA Sports Council and LA Promise Fund, a non-profit organization transforming under-served communities by preparing every child in one South Los Angeles neighborhood to graduate from high school.