Diary of a Swim Parent: Darbo Family Learns a Lot at Zones

Just like many other families, my husband and I grew into our role as swim parents gradually. Since our family moved to Los Angeles from overseas in 2015, our son Jean trained at the Vision Swim Club, “a small club with a big heart,” as the local newspaper called us. Junior Olympics and age group meets were a social and health-conscious way to spend week-ends.

When Jean got selected to the All-Star SoCal team in 2017 at the age of 9, we discovered the Western Zone Age Group Championships, AKA “Zones.” It was a whole new level: Parents collect swim apps on their phones; kids only wear tech suits, and coaches plan the entire year and tapering period with Zones in mind.

His first year at Zones, Jean won a silver medal in a relay. He added time in individual events and swam consoles. In his mind, it was utter defeat. We assured our son that if he applied himself in training, next year he would reap important rewards.

Despite us sounding like fortune cookies, Jean proclaimed “New mind set, new objectives” for the 2018 Zones. Now, at the top of his 10-and-under category, he was going for gold. Our delicate job was to make sure he kept expectations realistic and enjoyed these four days of competition where he was going to swim six individual events and four relays.

Day 1: The SoCal team coaches pull Jean out of his beloved 50m fly and sign him up for the 200m freestyle, an event he hasn’t swum in more than a year. Jean sees it as a setback. We encourage him to trust the coaches. He clocks a new PB and falls in love with 200m freestyle. Well done coaches!

Jean lives for relays. A Math Academy student, he’s also good at crunching numbers. Adding personal best times of the SoCal relay swimmers in the 100 free makes him realize that they have a shot at the Western Zone record. He rounds up his teammates and pumps them up so much that for 4 minutes, 25.35 seconds, we just watch four SoCal-branded torpedoes fly from wall to wall. Their gold medal and the new championship record establish early on that the SoCal team was there to win.

Day 2: Jean adds two seconds to his individual 100m freestyle. He barely makes the final where he finishes fourth. Lesson learned – go hard from the prelims, or you may not even be in the finals. We think hard about how to unlock the nuclear energy that Jean has in him. Should he eat a bigger breakfast? Come earlier to the pool to do the full team warmup? Other swim families have their own riddles to solve. Aneesh, for example, had his backstroke corrected at a swim camp a few weeks ago. The new technique hasn’t settled in yet and makes him add time. At this point, the SoCal parent community on Telegram is not very active; everybody is still getting used to the place and the hectic schedule.

Day 3: Jean goes hard in the morning 50m backstroke prelims and secures the top seed. In the final, he gets out-touched at the wall by a hundredth of a second! Angry and confused, Jean shoots down our, “It’s just a race” and “Look how far you’ve come!” arguments. We are having a hard time ourselves: The scorching heat of Roseville gives us headaches and nosebleeds. Good thing we made friends with a father from Alaska, grand-parents from Oregon and many others. Being a swim parent is an emotional roller-coaster. It helps when we see other parents support their children through thick and thin.

Jean is about to swim the 100 fly in the 400m medley relay. The boy who just beat him by 0.01, is on his team and now they have to work together for the SoCal A relay victory. Jean decides to put their rivalry aside for the time of the race: SoCal wins one more relay gold and sets a championship record. In the evening, Jean has a soul-searching phone conversation with his Vision team coach. They develop a game plan for tomorrow, with coach concluding: “Remember, mind over matter.” 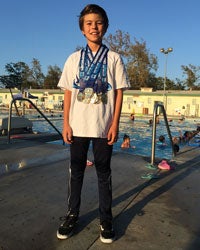 Day 4: Everyone is exhausted. Jean’s gone three days without winning an individual gold. He has a few hours before the end of the championship to change that. He becomes very quiet and withdrawn. We wonder if he’s OK. In search of inspiration, he goes to the starting blocks to cheer for his teammates and friends.

SoCal and Pacific go neck-and-neck for the championship team title. Every point and every race count. Dressed in red shirts, SoCal parents chant in unison. We high five each other, we hug and even dance on the bleachers after every race. We are proud of each other’s kids. We became a community. In the evenings, we share meals and talk middle schools, colleges and birthday parties. Being able to have such a free and positive emotional exchange with like-minded people is truly liberating.

Encouraged by his coaches, teammates and parents, Jean the underdog comes into his own. First, he takes gold in the 50m freestyle by out-touching the same SoCal teammate by .02 seconds. Second, in 100m butterfly finals, he puts mind over matter and swims to victory in 1:09.00. Third, Jean and his A relay SoCal buddies bid goodbye to Zones with the 200m freestyle relay win and a new Western Zone record!

SoCal takes the Championship team trophy. Seeing Jean and kids around him happy and proud of their accomplishments is our end-of-season reward as swim parents.