Even as far back as high school, Greg Meehan knew he wanted to coach.

During the summers, he helped coach his community 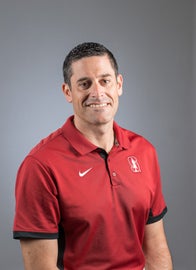 country club team and enjoyed seeing the impact his guidance and advice made upon swimmers of all ages.

From there, it was all about learning the ropes on-the-job, and as he advanced through the ranks, from many of the best coaches in the business – culminating in his current role as the leader of two-time women’s defending NCAA Champion Stanford.

He knows he’s doing exactly what he was always meant to do.

“In college, I was on the teaching/coaching degree path, but halfway through, I decided that coaching at the collegiate level was a better option for me,” said Meehan, who started swimming as a 6-year-old as the youngest of five siblings.

“It’s a decision I’ve never regretted. I’ve loved coaching from my first day, and I can’t imagine doing anything else.”

Now in his seventh season at the helm of the Cardinal women, Meehan has rebuilt the program into a perennial powerhouse – which was his goal from the day he started.

He got into coaching around the same time that Richard Quick had Stanford at or near the top of the NCAA field each year. It’s one of the factors that drew him to the Farm from his post as associate head coach at Pac-12 rival Cal-Berkeley.

When he took over the program in 2012, he knew he first had to look backward to plan for the future – analyzing Stanford’s past success to realize future championships. When the Cardinal won the NCAA title in 2017, it was the program’s first in 19 years.

“When I first arrived, I knew we had an opportunity for improvement, and that really interested me,” said Meehan, whose Cardinal program has twice finished as NCAA runner-up (2014, 2016) and third in 2015. “Understanding the great history of the program allowed me and my coaches to think ahead at what we would accomplish together. 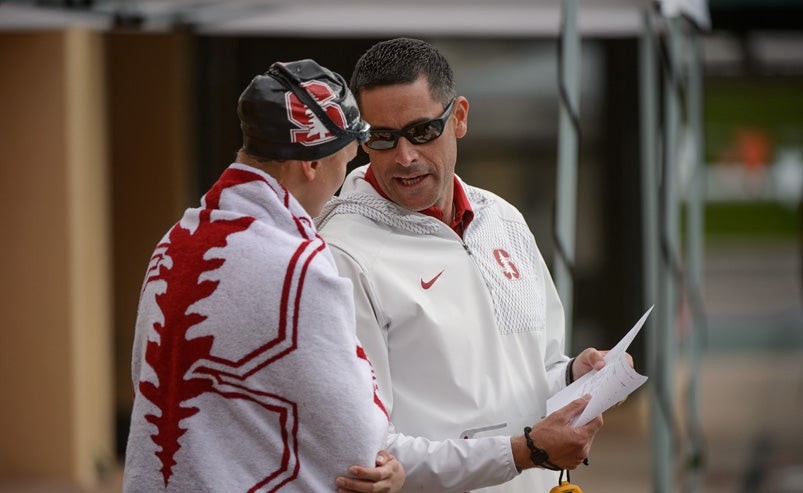 “I’m a firm believer that you’re only as good as the people you surround yourself with, so I also made it a point to hire some great, innovative coaches like Tracy (Slusser). Together, we gradually returned the program to being one of the top teams in college swimming.”

Meehan said as far back as his high school days, he always strived to coach the whole person when working with athletes.

He’s continued that philosophy through his club and college coaching, and he’s enjoyed tremendous success at every level since he started his career as the first assistant coach at William & Mary in 1998.

During his four years at Cal, he was regarded as one of the top assistants in the country. He helped lead the Golden Bears men's swimming and diving program to back-to-back national titles (2011, 2012) and a runner-up finish in 2010.

Before joining the Cal team, he served as the head coach of both the men’s and women’s programs at the University of the Pacific from 2005-08 and led the women’s team to a second-place team finish at the Big West Conference Championships in 2007.

On the men's team, Krzysztof Zoldak earned Big West Swimmer of the Year in 2005, and in all, Meehan's Pacific teams broke 13 school records and three conference records.

“Just as I have grown and learned through each coaching experience in the sport, I want my athletes to experience something similar for themselves,” said Meehan, a three-time NCAA Swimming Coach of the Year who has coached 29 different Cardinal swimmers to a combined 232 All-America honors, including 16 national championship relays and 23 individual national championships.

“I find that there are several teaching moments spread throughout each season that can make a big impact, and I do my best to make the most of those. For me, coaching is so much about loving what you do. When your athletes know that you are happy to be there, then they can also find reasons to be happy to be there. Everything isn’t always perfect, but those are the times when you can really find the fire to get better.”

Meehan has parlayed his collegiate success into National and international success – both with his individual athletes as well as in coaching teams, highlighted by his assistant opportunity with the 2016 U.S. Olympic team that dominated in Rio.

Along with multiple NCAA All-America and Academic All-America honors for his athletes, he’s also helped lead two Cardinal swimmers to win the prestigious Honda Award (Felicia Lee in 2014 and Katie Ledecky in 2017).

In 2017, Meehan served as the head coach for Team USA at the 2017 World Championships and was an assistant on the 2015 World and 2014 Pan Pacific championship teams. He also was a manager for the United States at the 2007 World University Games in Bangkok, Thailand.

Throughout his career, Meehan said he has looked for new, innovative ways to improve as a coach, including using every opportunity on deck and at meets to speak with the sport’s best coaches and take away nuggets of information and inspiration.

Among those he calls mentors are Jon Urbanchek, Dave Durden, Bob Bowman and David Marsh – but he identified some of his greatest coaching breakthroughs to simple trial and error.

“You try something, and if it doesn’t work like you thought or hoped, you move on to something else and see if that works,” said Meehan, who was inducted into the Rider Athletics Hall of Fame in 2017. “I’ve learned from my own experiences as well as from talking with other coaches that you can’t be afraid to try and fail because sometimes the greatest lessons are learned from the failures and not the successes.

“My conversations with other coaches are always invaluable to me. I think it’s important for coaches to share ideas – what’s working and what isn’t – even when you’re competing against one another. There have been so many great people I’ve worked with and continue to work with every day who inspire and motivate me to want to improve. I hope I can do the same for them because I think of coaching as an opportunity to give back.”