Wendy Boglioli Continues to Live -- and Talk about -- Her Olympic Dream

As a youngster, Wendy Boglioli was coached by both of her parents in the pool.

She learned to swim at 4, and by 5-years-old, she was swimming in the Copper River near her family home in Land O’ Lakes, Wis., tethered by a clothesline tied around her waist to keep her safe. 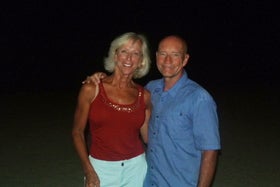 Her dad was the nurturing, consoling one, but it was her mom, a former swimmer herself, who was the “task master” – challenging her to work harder, perfect her stroke, strive for more and ultimately go for the gold.

“A lot of the time when parents coach their kids, it’s the father who is the demanding one, but that wasn’t the case with my parents,” she said.

It worked. Boglioli swam to a spot on the 1976 Olympic team and competed for the United States in Montreal.

Despite proven doping from a dominant East German team, she won a bronze medal in the 100 butterfly and swam a pivotal leg on the 400 freestyle relay – the U.S. women’s only gold medal of the Games.

Always in her corner, Boglioli’s parents surprised her by showing up unexpectedly in Montreal the day before the 400 free relay final.

Her brothers and sisters paid their airfare so they could see their daughter swim in what would be her one and only Olympics.

“I was so thrilled – overjoyed – to see them before the relay,” said Boglioli, who married husband, Bernie, in 1975. “My father’s health had been bad for a while, so they weren’t able to make it to Olympic Trials and a trip to Canada seemed completely unlikely. After I won my bronze, I talked to my mom, and they already knew they were coming to surprise me but didn’t tell me.

“I was really shocked that he made the trip over. He was on oxygen and not very well at all, but it meant so much to have them both there because they worked so hard to help me achieve my Olympic dream.”

Prior to that final race – that last gold – no one gave the U.S. team any chance of beating the powerful and deep East German team.

But the foursome of Boglioli, Jill Sterkel, Kim Peyton and Shirley Babashoff spent time before the race visualizing together their win and then edged East Germany to win gold.

Boglioli – who is near-sighted and lost her distance vision once she put on her goggles – said she was able to enjoy this final race outcome more than her bronze-medal finish a few days earlier because she was able to see it all happen live.

At the conclusion of her race, she didn’t really know what she had accomplished until she got out of the pool and asked the attendant how she finished. She put on her glasses to see 3 beside her name on the scoreboard and a new American record.

She said this team race was particularly special for her because they truly bonded together to work as a team – Babashoff bringing home the win as the anchor swimmer.

“We all knew what was happening with the East German women even though no one was talking about it publicly,” she said. “So to beat a group that was obviously on steroids whether or not they knew they were was very special for all of us. We really bonded as a team at those Olympics, and we’ve remained close ever since.”

After the Olympics, Boglioli swam for another couple of years while coaching with Bernie at Yale University and considered making a second bid for the 1980 Olympic team before finding out in 1978 that she was pregnant with first daughter, Bonnie.

As it turned out, leaving competitive swimming when she did made it less painful when President Jimmy Carter decided to boycott the 1980 Moscow Olympics, although it did affect her through her former teammates and sister, Lori, a Pan American gold medalist, who were denied the opportunity to compete.

From there, she got into public speaking – making appearances and talking about her swimming and Olympic experiences – and parlayed that into a successful career as a public speaker about the importance and need for long-term care insurance for a variety of companies.

Because her father required long-term care for several years at the end of his life – seriously impacting their lives financially – she has spent many years telling her family story and the importance of having some kind of plan in place for the future.

She’s also made it a point during her presentations to talk about the importance of living an Olympic gold medal life and empowering women to find their strength in whatever they choose to do in life.

“I speak at about 50 events a year – spending about 5 months on the road – all over the country, and I really love connecting with the audience,” said Boglioli, a speech and drama major at Monmouth College, where she also swam. She was induced into the school’s Sports Hall of Fame in 2007. “Knowing that I can do something or say something that helps someone else really inspires me.

“My father’s health at the end of his life and the financial burden of caring for him left my mom with very little. He spent his last days in a VA hospital sharing a room with 12 other men before dying from emphysema. If one of my talks can educate just one family and help them understand the tremendous importance of having a long-term care plan for them or their parents, then I know I’ve made a positive impact.”

A mother of three – Bonnie, Bernie Jr. and Taylor, all former swimmers themselves – Boglioli and Bernie moved to Hood River, Ore., two years ago, and while she admits neither of them have slowed down, they are enjoying life together as grandparents.

And Boglioli still loves talking about and being asked about her Olympic experience – and especially the last gold, appearing in a documentary by the same name chronicling the 1976 Olympics.

“I had such a great time in Montreal despite all of the controversy surrounding the East German women,” said Boglioli, who took up competitive cycling at the age of 40, winning eight gold medals at the 1995 and 96 U.S. Masters Track Cycling National Championships before stopping following a horrific accident during competition. “Some swimmers left Montreal with a bitter taste in their mouths because of what happened, but I always looked at these women athletes as victims of a corrupt system. We may have lost some gold medals, but these women lost their health because of the drugs they were given.

“I don’t want (former East German swimmer) Cornelia Ender’s medals to be taken away from her, but I would like to have it corrected in the record books, and that will most likely never happen. So I’ve decided to look away from this injustice and remember the Games for the relationships we built as teammates, being surprised by my parents and leaving with that final gold medal. It was a very special time in my life that continues to be very special for me.”