When he enrolled at Stanford to swim and study economics in 2001, Jayme Cramer expected one day he’d have a high-paying job in Silicon Valley and be far, far away from the pool.

But as he discovered once he and wife, Kate, learned they were expecting their first child in 2009, life doesn’t always play out as you think.

Sometimes, it takes a turn you never thought you wanted but eventually realize you would never change.

“It’s been a real journey since I retired following the 2008 Olympic Trials,” he said. “We learned that our first daughter was due in early 2009, and that changed my plans. But it was a decision I’ve never regretted.”

Out of college, he worked for a California company in information systems, working with banks, health care groups and hospitals among other businesses.

When the financial bubble burst in the world economy in 2009, Cramer found himself looking for new opportunities and that cushy job in Silicon Valley seemed to be a distant dream. 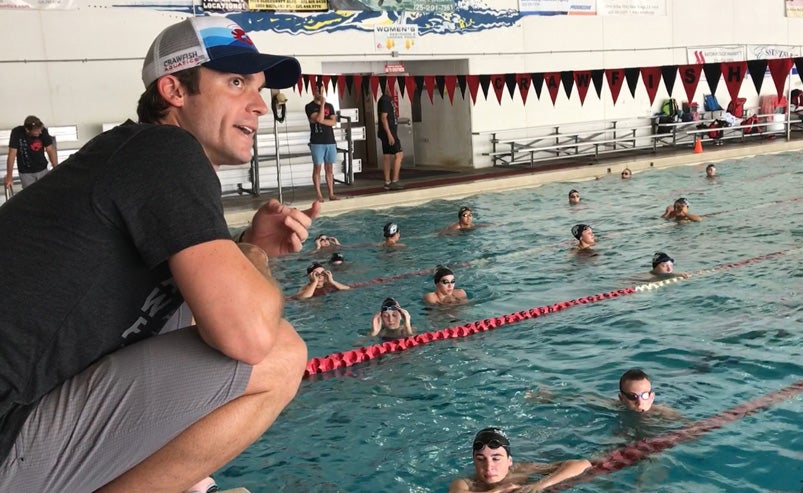 Seeing it as an opportunity rather than a hitch in his career plans, Cramer and his young family moved to Kate’s home state just a few months before welcoming second daughter, Molly, in 2010.

With more than 800 athletes spread out over three locations – Baton Rouge, Lafayette and Thibodaux – and most swimming year-round, Crawfish gives between 8,000 and 10,000 lessons each year.

Originally there to help shore up the business financially, based on his tremendous experience as a competitive swimmer, Cramer quickly joined the coaching ranks.

Cramer’s main gig is comparable to a Chief Operating 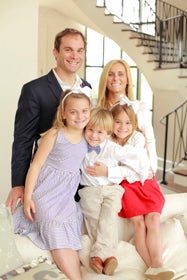 Officer and/or Chief Financial Officer role, but he spends a few hours each day working with the Baton Rouge location’s high-performance swimmers – doing all that he can to help them find and maintain their best individual performances.

“There is something absolutely rewarding about helping young swimmers find their own confidence and then watching that confidence grow in their performances in the water,” said Cramer, who hails from Falls Church, Va., but grew up in the Cincinnati, Ohio, area.

“I enjoy working on the finance and oversight of the club’s well-being, but I’ve discovered I’m not one to sit at a desk for too long. I definitely have a passion for working with athletes, and that’s something I never considered as a profession when I was swimming.”

As a competitor, Cramer was one of the most versatile swimmers on the U.S. National team – excelling in freestyle, backstroke and butterfly.

During his career, he represented the United States as a member of two FINA World Championship teams as well as Pan American and Goodwill Games teams.

Cramer won a bronze medal in the 100 backstroke at the 2003 Pan American Games in Santo Domingo, Dominican Republic, and two years later at the  2005 World Championships in Montreal, he won gold in the 800 freestyle relay.

At 2006 Short Course Worlds in Shanghai, China, Cramer added a silver medal in the 400 medley relay, and bronze medals in the 800 free relay and 100 butterfly events.

He competed at both the 2000 and 2004 Olympic Trials, but it was at the 2008 meet in Omaha when he said he felt he was in the best shape and position to contend for a spot on the team headed to Beijing.

After completing his NCAA career in 2005, he made the World team that summer and was able to continue training and competing toward achieving his Olympic dream.

But when he didn’t make it out of the 100 fly semifinals at 2008 Trials, that proved to be his final race as he knew it was his final meet.

“I felt a combination of relief and disappointment after that last race,” said Cramer, who approached the 2000 Trials as an “experience” and the 2004 meet as a “birthright” but went to 2008 Trials realistically thinking he would make the team.

“After the 100 and 200 freestyle races didn’t pan out for me, I was disappointed that I didn’t perform as well as I wanted, but I knew moving forward it was time to move on to the next phase of my life. Swimming wouldn’t have been the means to provide for my family, especially with a baby due in 2009 and then a second baby – Irish Twins – 10 months after that. I needed to do something different.”

And while he never considered coaching long-term when he started, Cramer said he now realizes it was ultimately his calling.

He said creating a culture shift in the club – motivating athletes to believe that they can swim fast, make teams, drop times and find their best personal swimmers – has taken longer than he thought, but he’s seeing results at all levels of the club, particularly the high-performance group he coaches.

And based on his own successes and failures – and what he’s learned as part of the process – he knows he can pass along that experience to his own swimmers so they, in turn, can learn from their experiences along the way.

“It’s one of the things I love most about coaching – passing on my own experiences to my athletes so they can get better and understand how and why things may happen as they do and also what they shouldn’t do to be successful,” said Cramer, who welcomed baby No. 3 – Leland – to the family in 2012.

“Funny enough, when I think back on 2004 Trials, I now know that I wouldn’t have met my wife, I wouldn’t have these beautiful children I absolutely adore and I wouldn’t be living this life that has become the dream I never knew I wanted if I had made that team. Life takes interesting diversions that don’t always feel right at the time, but I’ve learned we have to trust and have faith in those paths because there is usually something better waiting for us.”