Even though he’s in a good place now – promising career, good relationship with his three children, back on his feet – it was just a few years ago that Klete Keller was living in his car.

After his divorce in January 2014, the three-time Olympian found himself jobless and homeless simultaneously with few resources to help him.

He moved to the Washington, D.C., area from his Charlotte, N.C., home to live with sister, Kalyn, for several months, but when she had a baby, he felt he was in the way and decided it was time to move on.

He then nomadically traveled west to California and Colorado to visit his grandmother and former teammates and friends Erik Vendt and Kara Lynn Joyce.

He lived with his grandmother for several months, hearing great stories from her life as well as about the family, before leaving to stay with Vendt and Joyce for a few weeks. He then returned to North Carolina.

“I didn’t know where to go, because I didn’t really have anywhere to go, so I just traveled to see the most important people in my life, looking for advice and direction,” said Keller, a member of the 2000, 2004 and 2008 Olympic teams.

“I was paying child support for my kids and couldn’t afford a place, so I lived in my car for almost a year. I had a Ford Fusion at the time, so at 6-foot-6, it was challenging to make the room to sleep. But I made it work.”

During this time, Keller worked as a carpenter’s assistant and taught swim lessons at a local swim school to make ends meet as best as he could.

He alternated parking at one of the two Wal-Marts in his area and at rest stops and kept his gym membership active so he had somewhere to shower and workout.

All the while, he went four years without being able to see 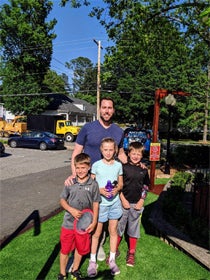 his three kids – daughter, Finley, and twin sons Carson and Wyatt – and it tore him up inside. He only lived 10 minutes from them, yet, because of the way custody ended in the divorce, he was unable to see them.

He went into a deep depression, deeper than even he thought existed, but held onto the hope that things would get better.

It would just take him a little while to dig his way back up.

“Within a matter of a few years, I went from Olympic gold medalist to husband, homeowner, guy with a series of sales jobs – life insurance, software, medical devices, financial products – and father of three, and I had a really difficult time accepting who I was without swimming in my life,” he said.

“Swimmer had been my identity for most of my life, and then I quickly transitioned to other roles and never gave myself time to get comfortable with them. I really struggled with things. I didn’t enjoy my work, and that unhappiness and lack of identity started creeping into my marriage.”

Keller said he also struggled with the fact that he wasn’t experiencing the same level or amount of success or satisfaction in his work as he had in swimming.

To swim fans, he’s largely remembered as having held off Australia’s Ian Thorpe on the final leg of the 800 freestyle relay at the 2004 Olympics to win gold – the stuff from which legends are made.

“The night before, I swam in what was called The Race of the Century against Michael (Phelps), Ian and Pieter (van den Hoogenband) in the 200 freestyle, so I was amped up,” said Keller, who also won individual bronze medals in the 400 freestyle at both the 2000 and 2004 Olympics. “That was the first time Australia had lost that event at a major competition since 1997, so it was a big deal.

“I remember before the race, we had a team meeting, and with Michael as the lead-off swimmer, Ryan (Lochte), Peter (Vanderkaay) and I were instructed simply not to lose the lead he’d give us, and we didn’t. Ian came up on me over the last 50 meters of the race, but I knew he had expended a lot of energy over the first 100 meters just to catch me, so I charged forward. I honestly didn’t know we’d won until I came up for air and the water cleared my ears and I saw and heard my teammates cheering. That was an amazing feeling – something I’ll never forget.”

All of these post-swimming events culminated in the perfect storm that demolished his life as he knew it – but ultimately helped him find one that he now enjoys and puts very few expectations upon.

“After swimming, I thought I had to find the same title or level of success in my work – no matter what I was doing or how much I didn’t enjoy it – to feel that same success that I did in swimming,” he said. “In swimming, you have to be selfish to a large degree to be successful, but when you are a husband and father, you have to be more selfless – and I wasn’t.

“As I look back now, I wasn’t a very good husband. But now, I feel like I’ve come through the darkness and found the light that I always wanted and needed to be happy. I’m getting there.” 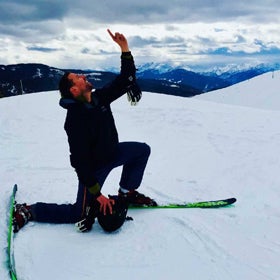 days training and living at the Olympic Training Center was Colorado Springs, so Keller packed up and relocated to Olympic City USA late last year.

With his real estate license, he’s slowly finding his way into the congested but lucrative world of residential real estate (he sold commercial in the past) in the Springs. He’s an agent in a small but strong boutique agency called Red Rock Realty Co.

Keller said he’s building his book, and he said he loves the weather (and ample sunlight) and opportunity in the area – although he does miss being close to his kids, who are still back in North Carolina.

But thanks to miles he acquires on his credit card, he’s able to make monthly visits to see them, and after being without them in his life for many years, wants to strengthen those father-child bonds every chance he gets.

“As soon as I moved here, I got a new lawyer and filed for my rights to see my kids, and now we’re making progress with that,” said Keller, who retired from swimming after the 2008 Olympics at a young 26 and never considered a coming back. “Knowing that I can see them more regularly has been a true gift. Not having them for those years was harder for me than I was willing to admit.

“It’s been a tough journey, but I definitely feel I’m better for what I went through and learned as a result. The entire experience taught me humility and gratitude and gave me a new perspective about swimming, work, life, family – everything. It was tough going through it, but I’ve always been someone who’s learned more from my failures than my successes, and this taught me the most important life lessons.”