Erica Rose Dancik Juggles Career, Marriage and Being Mom with Diligence and Drive

Erica Rose Dancik never considered herself to be a fast swimmer.

When she was competing, she always knew the longer the race, the better her result would be.

So, when the prospect of swimming distances of 5k and 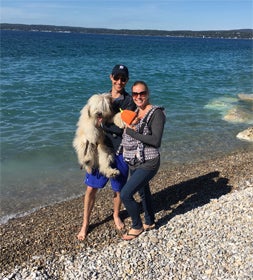 greater in an open water arena arose, she jumped at the chance to get out of the restrictions of lane lines and concrete.

“I actually hated every minute of my first open water race, but the fact that it got me out of the pool was worth it,” said Dancik, who competed for and graduated from Northwestern University.

“Within a couple of months, I competed in another open water competition, and it really started to grow on me.”

That first meet for Dancik – who became one of the American pioneers in open water competition in the early- to mid-90s – was an impromptu decision to compete in an open water meet the day after Nationals in 1996.

Her coach suggested since their return flights to Chicago were later in the afternoon, she and her teammates should go down to the Ft. Lauderdale beach and do the 5k swim.

Everyone else said no, but Dancik was intrigued by the idea of swimming in a wide-open environment with no visible restrictions.

“I said, ‘Ok. I’ll try it,’” she said. “A couple months after that race, I received a call that the results were going to be used as a qualifier to take a team to a race in Perth, Australia, on the course that would be used the next year at World Championships.

“After that trip to Perth, -- my first of many that took me around the world for open water competitions – I thought maybe that wasn’t such a bad first race (in Ft. Lauderdale) after all.”

While she made her career in open water competition, 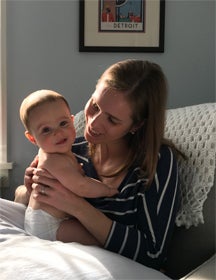 Dancik got her start in the pool like most young swimmers.

She said she was introduced to water before she could walk and was swimming year-round at a local club – the Lake Eerie Silver Dolphins – by 6 years old.

In college, she specialized in the 400 individual medley and longest freestyle events, but those events never proved long enough.

And while she did finish third in the 1500 free at 1997 Pan Pacific Championships (didn’t medal because the top two finishers were American swimmers), Dancik said she knew her best swimming would come at longer distances.

“It always felt like when the race was ending, I was just finding my rhythm; but then, it was too late,” she said. “I needed something with a greater distance where my stamina and aerobic base could really be shown. Open water was a natural fit.”

At 1998 World Championships, open water was still a young concept but Dancik excelled, especially having already swum the course the year before.

She used her natural ability and relatively minimal experience (and self-described “naïve” outlook) to strategize and swim her way to gold in the 5k. She and her U.S. teammates also won gold in the Team 5k competition.

For the next 10 years, she continued to travel the world for Grand Prix and World Cup events and other open water competitions in and around her swimming and education at Northwestern.

After finishing her degree in psychology, she continued to train and swim exclusively for open water.

During this time, Dancik met future husband, Brendan, on Match.com. As their romance blossomed, she said she began to think more and more about life after swimming but wanted to stay through 2008 and seek a spot at the first open water competition at the Olympics.

When she didn’t make that team, she said she knew it was time to hang up her suit and move forward.

“It was time; I’d given a lot of time and effort and myself to swimming, and it gave me a lot in return, but I was ready to see what was next,” she said.

The couple moved to Ann Arbor from Chicago to attend the University of Michigan and pursue a dual business and health master’s degree, and after she completed her degree, she started her career with DaVita Kidney Care in the Detroit area.

She started managing her own location, and after a year there, moved into a new role that moved her back to her hometown of Cleveland, Ohio, to oversee 12 DaVita clinics in the Greater Metropolitan area.

Dancik has been doing that for the past two years, and she said she really loves what she does to help people who are dependent on dialysis.

“It takes a full afternoon three or four times a week for most of our patients, so it really limits their lives,” she said. “That’s why we take special care to make sure they are comfortable and get the best possible care we can give them. The majority of people who start dialysis never get back off of it unless they get a transplant. It’s part of their normal life routine.”

During the past year, the Danciks also welcomed a new addition to their young family when son Connor arrived 10 months ago.

She said being a working mom has its ups and downs, but when she comes home at the end of a busy day and sees his shining face, she knows it’s definitely all worth it.

She said she relies often upon the many lessons she learned as a competitive athlete and swimmer to help her manage her days as well – specifically time management and the importance of teamwork.

“I’m still learning about my role every day, but if it wasn’t for the time management skills I learned as a competitive swimmer, my days would be a lot more complicated and tough,” she said. “When you’re overseeing 12 different locations with 12 different clinic managers, you also have to know how to communicate and work with your team to get their best results. I definitely learned that in swimming.

“Swimming also taught me focus and drive to accomplish my goals. You can’t let obstacles in your way deter you from pursuing them. You find ways around and over them, and that’s also something swimming taught me. I also learned a love for other cultures in my many travels for competitions, and these are all things I can never repay to the sport that continues to reward my life in many ways.”