Jeremy Linn Impacts the Future of Swimming through Coaching

For some athletes, the margin between first and second – gold and silver – is vast and unattainable.

Just ask anyone who has competed against Katie Ledecky.

For others, it’s minuscule and debilitating – the outcome decided by mere seconds and in question until the final touch.

That was the case for Jeremy Linn in the finals of the 100 breaststroke at the 1996 Olympics.

He dropped over a full second from his best time but was out-touched at the wall by .09 seconds to finish second – taking home the silver medal instead of gold.

And while that result might have been a tremendous, career-defining disappointment for some, it was just the opposite for Linn.

His time set a new American record (and beat the existing world mark) and proved to him and others that you’re never out of a race when you want it badly enough and swim your own race no matter what’s happening in the other lanes.

“I was always 19 strokes to the 50 wall,” he said. “In front of the buzzing home crowd and the excitement of the moment, I was very fired up. As I made my turn, one word went through my head ‘silver.’ I came off the turn and was about two body lengths behind. The second 50 went as planned – 21 accelerating strokes and it was a heck of a race to the finish.

“We were both faster than the existing world record in that swim. I made one mistake during the race – at 19 strokes I reached for the wall and glided long. I always get asked if it was a disappointment to win silver ... uhh no! I could not sleep for two days after. Absolutely unreal moment.”

Since those days, Linn said he has learned many things 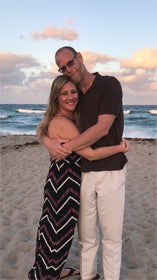 about life and competition. In his view, so much of success in swimming comes from the ability to “own your routine.”

For him, that meant – moments before a race – doing whatever he needed to put himself in a place where he was mentally and physically ready to execute what he trained to do.

“I guess I put on a bit of a show, which was a spectacle to onlookers as well as my competition,” said Linn, who started swimming at 4 years old to be like his older brother and sister who swam.

“This routine evolved through time as I grew athletically and personally. Never any flips (off the blocks), but my vertical leap was over 40 inches, and I took advantage of it. As the legend grows, I will be happy to go along with it.”

But Linn admits he never truly saw himself as a future Olympian until his friend, Anita Nall, made the 1992 Olympic team.

That opened his eyes to the possibility and probability that he, too, could achieve that if he put in the work and truly believed he could accomplish it.

“As a kid, I looked at Olympians like they were superheroes,” he said. “Who doesn’t want to be a superhero? It started to become real to me when I was 16 and Anita made the ‘92 team. All of a sudden it seemed attainable.

“This was the exact moment I made the decision that I was going to do whatever it took to be an Olympian myself. It is amazing what you can achieve when you believe it is possible.”

At the 1996 Olympics – his only Olympics after making an unsuccessful run at the Sydney Games in 2000 – Linn was part of a second world record when he swam the breaststroke leg on the 400 medley relay team with teammates Mark Henderson, Gary Hall Jr. and Jeff Rouse.

After Atlanta, Linn returned to the University of Tennessee where he was a 17-time All-American – including four individual NCAA titles. He held the NCAA and U.S. Open records in the 100-yard breast for almost a decade until Mike Alexandrov set new marks in 2007 for Northwestern.

For Linn, who said he always found tremendous satisfaction in besting the “physical and mental challenges” required to be an elite athlete on a daily basis, he knows talent only took him so far.

“I am proud of the fact that I was able to get the very best out of myself,” said Linn, who was inducted into the Tennessee Athletics Hall of Fame in 2017. “So many athletes look back at their career and have regrets, and generally those regrets are based on not giving everything they had to their discipline.

“One of the core values I derived from the sport of swimming was giving 100 percent effort. This value is based in honesty with one’s self about giving 100 percent to the challenges that lay before you. I was blessed with talent for sure, as so many young athletes are. The simple fact was that I was more willing to embrace the discomfort it takes to do something special.”

His final meet as a competitive swimmer was at 2000 Olympic Trials. Linn said he felt ready to compete physically and mentally, and with the event having only prelims and finals (no semis) in his events, he knew he had to swim fast in the morning while leaving more in the tank for evening finals.

In 1996, he was seeded sixth going into finals and swam to the victory, and his plan was similar for 2000 – but he finished 9th in prelims and didn’t advance to finals – essentially ending his swimming career.

After missing making the 2000 Olympic team, Linn found himself with some time but still wanted to be involved with swimming.

He served as the senior coach at the QDD Swim Team in Manassas, Va., from 2004 to 2007 – coaching three swimmers to national championship qualifying times. He also coached three of the four QDD women in the 200 freestyle relay to the VSI State Senior Championships for short course in 2007.

After a short stint with Tar Heel Aquatics in Durham- 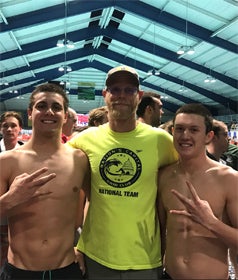 Chapel Hill, N.C., in 2007, he moved over to Nation’s Capital Swim Club WEST in northern Virginia in 2008 and has been there ever since.

He said he chose to get into coaching because it was the outlet where he could positively impact the greatest number of people possible.

“I look at my life in the sport as a life of service,” said Linn, who has been married to wife, Nicole, for 5 years and already knows his future children will swim. “Through the sport of swimming, I learned a lot of values and I formulated a value system that we educate and hold our student athletes to in order to help them become good people, and good people swim fast.

“I live the values that I learned and now teach through the sport – honesty, effort, being a great teammate, punctuality, mentorship, being humble, believing in myself and never taking an opportunity for granted – to name a few. Swimming is in my heart and soul. Swimming has and will continue to be my life’s path. It has been a way of life and a very special one.”