Each day when Ashley Whitney walks through the doors of the Nashville Aquatic Club – where she coaches Masters swimmers and still swims herself – she is hit with a wave of déjà vu.

After all, it’s the club where she learned to swim as a youngster and where she parlayed her natural ability into a college scholarship and eventual Olympic gold medal.

And even though she finished her high school swimming at The Bolles School in Florida, Whitney said she’s always considered NAC as her home pool.

Now she calls it home every day.

“It’s been great being back, and even though I always 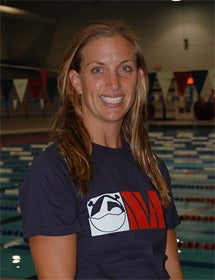 contended that I would never get into coaching, I absolutely love it,” said Whitney, who coached at Excel Aquatics in Nashville for a few years before moving back to NAC in 2015.

“Working with over 350 Masters swimmers in three locations (throughout Nashville) is exhilarating. It’s a great reminder for me how important swimming is in people’s lives – and how important and life-changing it proved to be for me.”

Like the more than half of her Masters swimmers who have come through her program over the years, Whitney didn’t know how to swim before coming to NAC.

Because her mom was a Masters swimmer, she was introduced to the water at a young age and quickly learned to swim.

In the early days, Whitney said she didn’t much enjoy the sport, but it didn’t take her long to see the value – and pay-off – from the sport.

“It was torture my first year or so, but within a few years – and once I won a couple medals at a city meet – I really started to enjoy swimming,” she said. “My parents encouraged me to swim year-round, and I did that around age 10. I knew I was in it for the long haul at that point.”

By age 12, Whitney had qualified for a zone meet and was grinding out some serious yardage in practice.

“Something clicked for me at that age, and all I was focused on was finding new ways to get better and faster,” she said. “I was determined to do whatever I could to elevate my swimming to the next level so I could be an Olympian. When it happened in 1996 (when she was 16), I’m not sure I was truly ready for it, but I definitely made the most of it.

“I can’t thank my parents enough for taking me day in, day out to practice and to swim meets and believing in me. Mentally, something turned on in my brain that motivated me to want to train harder and swim faster, and with my great coaches along the way, I accomplished what I wanted. I guess you could say I was internally driven.”

Whitney made the Atlanta team as a member of the 800 freestyle relay – earning a top 6 finish in the 200 free – and joined one of the youngest groups of female swimmers ever assembled on an international team.

Along with Amanda Beard – who became one of the faces of the American team at 14 years old – Whitney swam with Beth Botsford, Jilen Siroky and Catherine Fox, who were all 17 or younger.

As one of the “young ones,” Whitney said it was reassuring having other young swimmers with her as they formed their own group and (unintentionally) drove Amy Van Dyken – one of the stars of the U.S. team in Atlanta – into her own room so she could focus.

“We definitely had fun during those Games,” Whitney said. “We were two girls per room and we had suitemates, so there were four of us per suite, and because we were about the same age, we really got along well.

“Because my event (800 free relay) was at the end of the meet, I walked in the Opening Ceremonies, which was magical, and I spent the majority of the week in the stands cheering on my teammates. Swimming in front of a home crowd was pretty amazing.”

When it came time for her to swim in the morning prelims, Whitney said, despite having experienced the loud, motivated crowd throughout the week, she was overwhelmed by the tremendous support, and it affected her swimming.

“Seeing Janet (Evans) pass the torch to Muhammad Ali as part of the opening ceremony was amazing, and she kept it a secret from everyone, so we were surprised,” Whitney said. “Swimming in front of such a big crowd was a bit overwhelming for me, but it also energized us.

“I went out so fast in my first 100 – the fastest I’d ever gone before, and to get that gold medal was truly amazing. I keep it in my sock drawer and bring it out every once in a while when the kids ask to see it.”

Whitney also said she felt right at home at the Atlanta Games as there were 26 teammates from Bolles competing for their home countries from all over the world – three from the United States.

“It was definitely a Bolles School reunion in Atlanta,” she said. “Being young, that helped seeing so many familiar faces from all over.”

Whitney continued swimming for the next year – earning a spot on the same relay team at 1998 World Championships and bringing home another gold medal – but knee problems and eventual knee surgery kept her out of the 2000 Olympic Trials and another shot at an Olympic team.

After high school, she initially attended the University of Georgia, where she was a member of the Bulldog’s first NCAA National Championship team in 1999, before transferring to the University of California at Berkeley where she swam for Teri McKeever and graduated with her degree in social welfare. She returned to Nashville and NAC after graduation.

Even though she wasn’t swimming as much after returning to Nashville following graduation, Whitney said she didn’t give up hope of trying to make a second Olympic team in 2004.

She kept in shape by working her knee in a different capacity and did qualify for Trials but decided to retire months before the meet.

“I didn’t swim much before 2004, but I did a lot of cycling and competed in some triathlons to stay in shape and make a run at 2004,” she said. “Riding kept my endurance up, but I just knew it was time for me to retire.”

Her ongoing triathlon competitions kept Whitney in the water, and in 2008, she returned to competition in Open Water and qualified for the 2008-09 National Team.

Once again, she had the Olympics on her radar, but shortly after winning the 2009 Open Water National title in the 10k, she learned she was pregnant with daughter, Maya (Conrad), and she stopped training and competing.

Now, she’s content coaching and swimming at the Masters level – and watching her daughters Maya, 9, and Wren, 7, explore their own interests in and out of the water.

And she said each day she gets to work with adults at varying levels of ability – some who don’t know how to swim when they join her Masters program – gives her a better understanding of all that swimming offers in her life and others’ lives.

“I’m not forcing them into swimming, although they both know how to swim,” said Whitney, who is competing at Masters National Championships with many of her students this week in Indianapolis at the same pool where she qualified for the 1996 Olympic team and is excited to see her name on the pool’s Wall of Champions.

“Swimming is such a gift. I love teaching adults to swim and helping them reach their goals. Seeing that payoff makes me so appreciative of all that swimming has given me over my life.”