Tim Phillips is Committed to His Future in Swimming and Beyond

During the Michael Phelps years, Tim Phillips never looked at his signature event – the 100 butterfly – as a competition for second place.

In his view – and with mere tenths of a second separating the best swimmers in the world in such a short, frenetic race – he always believed he had a chance.

“I always believed I had the perfect race in me to beat Michael,” he said. “I was always confident in my abilities and did what I could to win. There really isn’t much time between first and second in the 100 fly.”

Still, once Phelps hung up his Speedo to enjoy his life as a father and husband, Phillips’ and other fliers’ fortunes improved dramatically.

He made the most of the opportunity last summer by 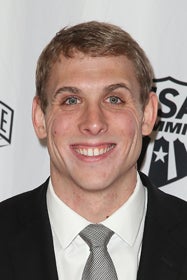 earning a spot on his second World Championship team – and set himself up for a great run in 2018.

“After (2016) Olympic Trials, I took quite a bit of time off from training and re-evaluated the importance of swimming in my life,” said Phillips, who was born in Germany when his dad was overseas working for DuPont. “What I realized after several months away was that I still loved the sport and had more goals to accomplish. I wasn’t done yet.”

Phillips return to full-time training began in January 2017, and less than 6 months later at Phillips 66 USA Swimming National Championships, he was on the plane to Budapest. He made the finals of the 50 fly and finished ninth in the 100 fly (just missing swimming in the finals) but left with a gold medal as part of the 400 medley relay team.

Although he seriously considered retiring after an especially disappointing Olympic Trials (fifth in the 100 fly) the previous year, Phillips’ subsequent success reaffirmed his decision to return and emboldened his love for competition.

Four years earlier, he had experienced a similar disappointment – coming into Trials as the third-ranked 100 fly swimmer in the world. He finished sixth and left Omaha without a ticket to London.

“I was leading at the 50-meter mark and was right there in the mix at the 75-meter mark, but I just couldn’t hold onto the lead at the end,” he said. “It was tough, but I was young and I knew I was heading back to college and had more opportunities ahead.”

Phillips said accompanying then-girlfriend Katie Meili to Rio to cheer her on at the Olympics, while difficult not being there as a competitor, helped get him back in the right frame of mind toward swimming.

“It was hard not to hang it up after coming so close to making the 2016 Olympic team,” said Phillips, who has been training in his home state of West Virginia since last fall after several years with SwimMAC and David Marsh in Charlotte.

“But when I came back, I came back dedicated and ready to compete. I kind of felt like the pressure was off, and I was training more on my own. Now, when I swim, I swim because I love it, and that’s showing in my results.”

He proved this two weeks ago at the TYR Pro Swim Series in Mesa, Ariz., where he won the 100 fly and finished (.05) ahead of Michael Andrew.

Phillips said he found his in-season times to be indicative of where he is with his training and he returned home to Vienna, W.V., very optimistic with Phillips 66 National Championships just a few months away.

“Even with the windy conditions, I felt really good about my results in Mesa; I felt really good and smooth in the water, right on pace for the next few months,” said Phillips, who was in the water as young as he can remember, following in the footsteps of his father, Tom, also a world-class swimmer and served as his coach early on. He started year-round swimming when he was 5.

“I know I still have some work to do to get where I want to be at Nationals, but this was a really good indicator for me of where I am right now.”

Phillips, who will be 28 later this year, said he knows he only wants to compete a couple more years – maybe less – depending on how things go this summer.

He starts an internship this summer with Citibank in New York City and plans to work his training schedule around that so he can be at his best for Phillips 66 Nationals in July.

Depending on how things go, he would welcome the opportunity to stay in New York at the conclusion of his internship regardless of how much longer he decides to compete.

But the bottom line for Phillips when it comes to his swimming is that the rest of his career largely depends upon how things go at Phillips 66 Nationals.

“If I swim well and make either the (2019) World Championship and (2018) Pan Pacific Championship teams or one of the other international teams, then I will compete and then evaluate where I am moving forward,” said Phillips, who will work in sales and training for Citibank.

“All I am committing to right now (with swimming) is this year. After that, it’s hard to say. I’m planning to just take it year by year.”

“It will be a game-time decision for me,” he said. “I honestly don’t know what I’m going to do beyond this year. But I do know that as long as I’m loving swimming and swimming fast, it will be a possibility.

“If I’m still feeling dedicated and believe I have a good shot at making the (Tokyo) Olympic Team, then I will give it some serious thought. But at this point – and with my post-swimming career taking off this year – I am not sure what I’ll do.”