Catherine Fox is Finding and Giving Balance to Life

In the years since she ended her competitive swimming career in 2004 (and again in 2008), Catherine Fox has tried to apply the sport’s lessons to her life.

At the same time, she said she celebrated victories and sought lessons in defeat while traveling what might seem to some as an “offbeat path” that’s included circus art, hand-balancing, contortion and ariel rope contortion.

It’s like something out of Cirque de Soleil, and she loves 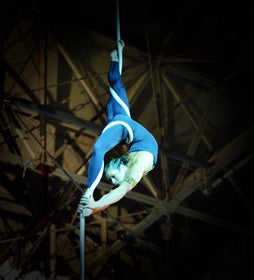 the balance and meaning all of the above give to her life.

“Looking back, learning new mind and body skills has been a constant in my life,” Fox said. “The move from pool to the circus gym was quite seamless. I’ve felt at home in each.

“Setting foot into a circus training gym felt comfortable and with a new sense of excitement. I remember thinking: ‘Damn, I thought I was an athlete. I have so much more to learn.’”

All of that added to what she knew – or thought she knew – about swimming in a positive, reaffirming way.

“Truthfully, I think I understand more about swimming techniques now than I did when I was swimming with passion in high school and through college,” she said.

Fox got her start in the sport on her own volition – however there was some “gentle guidance” by her parents who steered her away from gymnastics and dance to swimming.

She chose year-round swimming at age 9, but swam in the summertime when she would wake up and bike a mile to practice as a 7-year-old.

She did that for a few years when she joined the Kansas City Blazers, and at 14, she got her first restricted driver’s license and started driving herself in the family minivan to pre-sunrise practices.

”At first, swimming was an excellent way to work out a lot of extra energy,” she said. “There was something about water I was attracted to. Maybe it helped balance out my fiery nature. I loved the endorphin rush I experienced after a difficult workout.

“While I still miss that, I can do well without those pre-dawn Kansas outdoor pool plunges. Even the tepid weather of Northern California is freezing before the sunrise.  Early on, as I improved my swimming I really enjoyed training with the boys on our Kansas team. It felt special to be the only girl in an ‘all boys’ lane.”

As a competitor, Fox said she swam everything but the breaststroke – sprinting being her forte and love.

At 5-foot-4 when she was competing, Fox – whose parents met in Vietnam while her father was working as a journalist and her mother was a native working as a social worker during the Vietnam War before moving to the United States in 1972 – was smaller than most of her competitors at the time.

But she said it was her fast starts and turns – along with her underwater work – that helped her make up for that difference in height and corresponding wingspan.

“The underwater undulation came naturally to me,” said 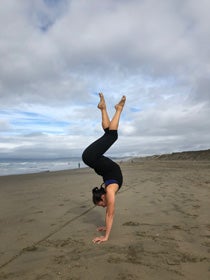 Fox, who now stands at 5-foot-6, growing two inches by straightening her spine through Chinese hand balancing and contortion. “As a three- or four-year-old, I remember understanding propulsion was much more effective using the dolphin kick.

All the while, Fox said she dreamed of becoming an Olympian – but not necessarily in swimming.

She used to play on a hammock strung between two trees in her backyard – imagining winning an Olympic gold medal over and over, in a new Olympic gymnastics’ sport.

Blazers Coach Pete Malone found a way to tap into that dream some years later when she was 14. He pulled her aside and asked her if she really wanted to become an Olympian.

“I almost didn’t believe him,” she said. “He said if I were truly committed – and if my parents would sign in – he would put together a four-year plan that could possibly take us to the 1996 Olympics.

“He asked me to give it thought, to discuss it with my parents. Two weeks later, we all sat down and agreed to a four-year commitment. It was both exciting and overwhelming. And you know what? We all largely stuck to the plan.”

Aside from her two children – 8-year-old Judah, and 3- 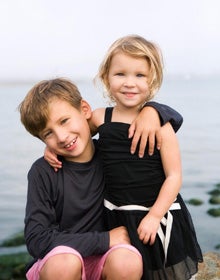 year-old Asha, who Fox calls her “crowning life highlights” – making the 1996 Olympic Team and winning two gold medals in Atlanta are what she said defines her swimming career.

A 21-time All-American and nine-time NCAA Champion at Stanford, Fox won relay golds in the 400 freestyle and 400 medley relays in Atlanta – the last time the Summer Games were held on U.S. soil.

“The Olympic experience was in some ways unreal. After so much preparation, it was like living through a dream. In some ways, that experience was akin to unexpected feelings I’ve had as a parent, as a mother when a moment with a child completely overwhelms you and fills you with so much love.”

“I break up old fascia tissues and reorganize them to change muscle patterns and balance skeletal structures,” she said. “Also keeping me busy, for the past five years I’ve been in a doctorate program in Eastern medicine, learning acupuncture and herbal medicine. I hope to finish in another year and a half.”

She’s also been co-authoring a learn-to-swim program with Jim Spiers, President of the Swim for Life Foundation, over past decade.

The program – called SwimJim – is based out of New York City and is largely based on saving lives through water safety and awareness.

“We cultivate excellence at every level,” said Fox, who was inducted into the Kansas Sports Hall of Fame in 2006. “Lia Neal, also an Olympian and fellow Cardinal, began at SwimJim and came back through both the 2012 and 2016 Olympics and Olympic Trials to help her improve and practice her swim technique.”

While she officially retired following the 2004 Olympic Trials – where she finished fourth in the 50 free – Fox said she first left the sport following her senior year at Stanford in 2000 when she failed to make the 2000 Olympic Team.

But she returned to training for the 2004 Trials and when she missed making that team, she decided to retire and move on with the next phase of her life.

She did make a comeback attempt for the 2008 Olympics – pursuing Kung Fu, ballet and modern dance to keep her body in shape for competition – but then life got in the way.

But not in a bad way.

“I spent four to eight hours a day training; it was fabulous,” she said. “I felt so alive. I remember thinking, ‘Cherish this time; there will never be another like it. If I do get to experience training like this someday when my children (ones I had not even had yet) are older, I’ll never have this young body again.’

“But a swimming comeback was not to be. It was then 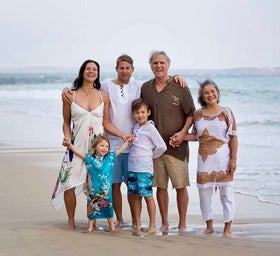 another phase of life overwhelmed me. I ran into my old eighth-grade crush, Zach Hall, and we became a couple. Soon after, I gave birth to a lovely son. I call that period my second retirement, with no regrets – only blessings and gratitude.”

Fox said when she examines her life in retrospect, it was the lessons she learned as a swimmer that continue to positively impact and shape her life.

“Swimming was all I ever hoped it would be – and more,” she said. “Experiencing a big disappointment at the 2004 Olympic Trials was painful, but, you know, that’s life.  Ups with downs.

“I could look back, wish things had been different, but what’s the point? Get up, go on, accept and love yourself and your earned accomplishments, and never forget they are the results of a lot of other people helping you along the way.”