MESA, Ariz. – Lenny Krayzelburg had only eight swimmers from his #USASwimSquad roster competing at the TYR Pro Swim Series at Mesa, so filling out his line-up for last week’s meet was pretty easy for him.

But while his pickings were slim in terms of options, the talent had plenty to offer. The #KrayzelburgSquad swam to eight first-place finishes for their honorary captain, catapulting him to the head of the pack in Mesa and helping him maintain his overall lead in the series after the third of six meets.

Team Krayzelburg scored 89 points in Mesa, followed by the #CoughlinSquad with 82 points, the #SandenoSquad with 71 points and the #LezakSquad with 65 points.

Krayzelburg leads all #USASwimSquads at the halfway point of the season with 267 points, followed by Coughlin with 242 points, Sandeno with 226 points and Lezak with 184 points. 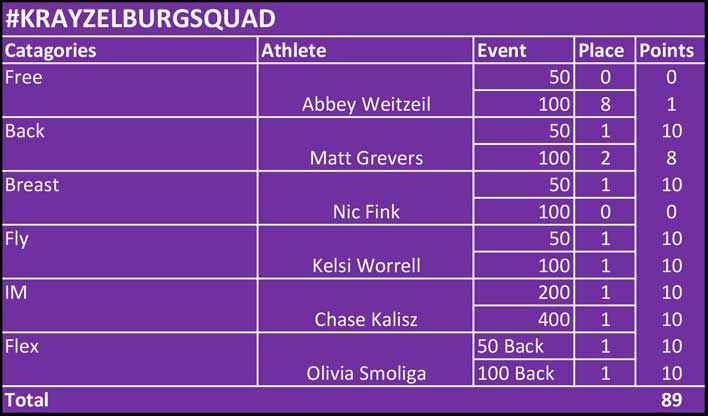 As mentioned above, Krayzelburg’s team had eight first-place finishes, including Matt Grevers in the 50 back; Nick Fink in the 50 breast; Kelsi (Worrell) Dahlia in the 50 and 100 fly; Chase Kalisz in the 200 and 400 IM; and Olivia Smoliga in the flex 50 and 100 back. Every swimmer on his roster scored at least one point, but he took hits with no points in the 50 free and 100 breast. 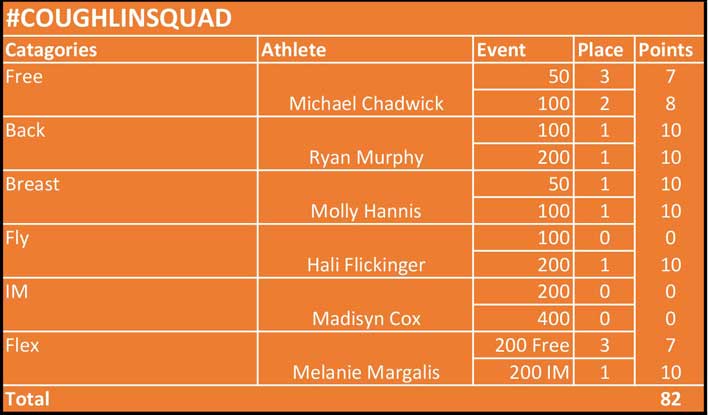 Coughlin’s line-up was almost as strong, with six first-place finishes – Ryan Murphy in the 100 and 200 back; Molly Hannis in the 50 and 100 breast; Hali Flickinger in the 200 fly; and Melanie Margalis in the flex 200 IM. A second- and third-place by Michael Chadwick in the 100 and 50 free also helped, but missing points in the 100 fly, and 200 and 400 IM is what made the difference between her and Krayzelburg. 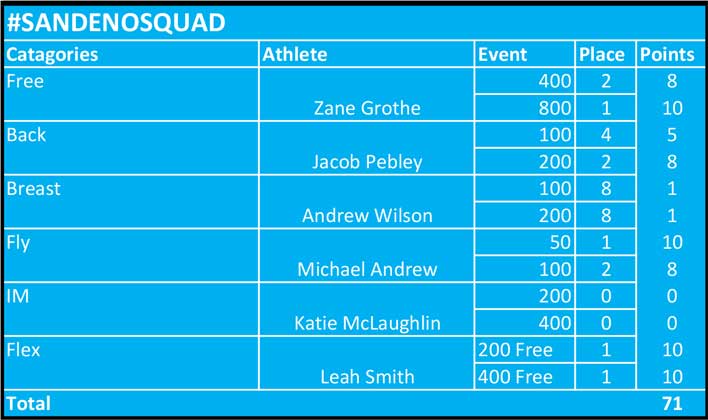 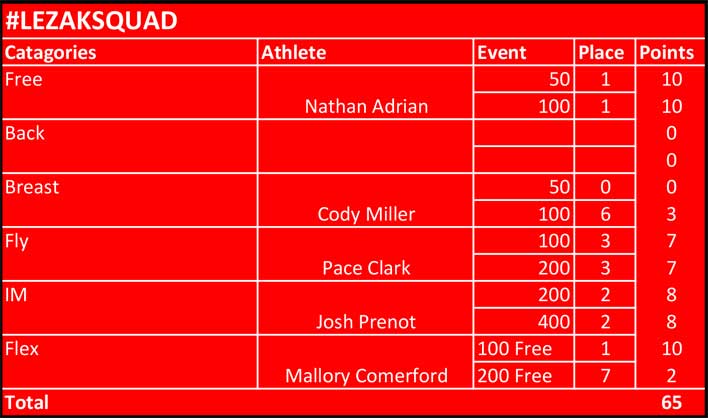 For the third straight meet, the #LezakSquad finished fourth. It’s not that the team was without its highlights. Lezak knows sprinters, and for the third straight meet Nathan Adrian paid off big-time for Team Lezak, taking first in the 50 and 100 free. Mallory Comerford also came through in the flex spot with a win in the 100 free. His depth was almost as strong as Sandeno’s, but just as in Atlanta, Lezak had no backstroker competing in the meet, and he also had no points in the 50 breast. That might have made the difference between third and fourth place in Mesa.