Whether it was as an Olympian in the pool or USA Swimming Committee member out of it, Jamie Rauch always enjoyed making a splash for swimming and swimmers. 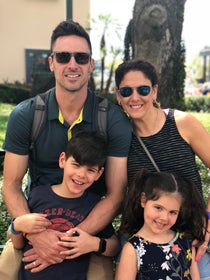 wife, Lauren, Rauch – who won a silver medal in the 800 freestyle relay at the 2000 Sydney Olympics – is finding new ways to seek motivation and satisfaction in support of his former sport and all that it offers.

“I’ve always considered myself to be a vocal advocate for swimmers, while I was training and competing and even more when I was a member of the Athlete Executive Committee with USA Swimming,” he said. “Now, as a coach of numerous triathletes as well as someone who competes in triathlons, I still do my best to stand up for swimmers’ rights as often as I can.”

After several years working in the asset management industry, Rauch decided a couple of years ago to be a stay-at-home dad. Shortly after that, Lauren became interested in getting involved with triathlons, so he started working and training with her, also becoming involved with competition.

It wasn’t long before he was working with other 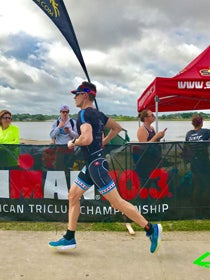 triathletes – and now he has his own side business of helping train and condition athletes for competition.

“It was really important to me and Lauren to be home for them, and I had reached a point with my full-time career that it didn’t make sense anymore,” he said. “My wife has a job that she loves, so we made the decision together for me to be home.

“The triathlon business was never planned. It just happened through our own involvement, and we both love it.”

Rauch’s swimming career began in his hometown of Houston, and he said he first got in the water because “it was too hot to do anything else.”

He started in summer league at 5 years old (as most young swimmers do), and it wasn’t long from there that he joined a local swim club – Cypress Fairbanks Swim Club – and swam year-round.

He said he always liked swimming because he loved being in the water and making lifelong friends – several of whom he still keeps in touch with – kept him coming back to the pool and quickly excelling in the freestyle events.

“If I need something or they need something, we all know it would only take a phone call or text message and we’d be there for each other,” he said. “That’s the kinds of bonds we form in this sport. Ours is not uncommon by any stretch of the imagination.”

During his career at the University of Texas – where he helped return the Longhorn program to NCAA prominence with an NCAA Championship in 2000 and 2001 – Rauch excelled and went to the 2000 Olympic Trials believing he had a shot at making the team.

But he said he also knew that it was going to take his fastest times and a little luck for all the pieces to fall together.

“I actually never really believed I was in a place to expect to make a team, but I always believed it was possible,” he said. “You have to believe. Otherwise, why go and compete?”

He did. He finished fifth in the finals of the 200 freestyle and earned a spot on the relay heading to Sydney to face home-team Australia’s strongest squad in decades.

“We went into the 800 free relay against some of the strongest 200 freestyle swimmers ever on Australia’s team,” he said. “Did we believe we could be them? It was unlikely with Ian Thorpe and Michael Klim on the team, but we couldn’t not believe it.”

Rauch swam in the morning prelims and helped the United States secure the second-fastest time among the teams.

Having swum the fastest U.S. leg of prelims (1:48.94), U.S. Head Coach Mark Schubert made the call that afternoon for Rauch to swim a leg in the final.

“I saw Mark after my morning swim, and he told me he couldn’t talk to me right then because he had an important decision to make,” Rauch said. “He was talking about deciding who was going to be on the final relay, and when he told me I was going to swim it, I was ecstatic.

“He went out on a huge limb making that decision, but it was a dream come true for me.”

Australia went on to win the event by more than 5 seconds – and set a new world record in the process – but Rauch said with other top swimmers like  Marcel Woudaand and Pieter van den Hoogenband swimming for a strong Netherlands team and Massimiliano Rosolino   on the Italian team, a medal for the United States was far from a given.

“We really had to pull together in that final and having Klete (Keller) get that extra second was what put us into second place by .06 over the Dutch team,” he said. “Italy was right behind them (.21 back) and Great Britain (.28 back) was right there, too.

“We knew gold was a done deal, but that race for second was amazing. So exhilarating, and so great to be part of that whole experience. I wouldn’t trade it for the world.”

Rauch went on to make the 2001 World Championship team and left with a bronze medal as a member of the 800 free relay.

He competed at Phillips 66 Nationals that summer and earned a relay spot on the 2001 Goodwill Games team, but decided before the meet that he was ready to step into the next phase of his professional life – the real world.

When he left, he walked away with no regrets – only happy, fulfilled memories of a fun, fast time in his life.

“I knew my career had run its course, and in all honesty, I never thought about swimming past NCAAs in 2001,” he said. “The Sydney Olympics fell at a very good time in my career, and then being able to finish out my college career on a high note (winning another NCAA title) capped things nicely.

“I’ve seen some athletes hold onto swimming too long, and that didn’t sound appealing to me. It just felt like that right, best time for me to move on. I wasn’t really enjoying it anymore, so I knew I wanted something else. I fulfilled my potential and didn’t leave any swims in the water. I always did my best – I did what I could do.”