Dave Denniston never stopped loving Wyoming. When he was paralyzed in an accident near his family’s cabin, it only increased his fondness for the beautiful outdoors. After returning to swimming, he moved into the role of coaching the U.S. Paralympic Team. And then, as destiny would have it, he ended up as an assistant, and now head coach, at the University of Wyoming. He talks about that, his friendship with his first-ever swimming hero Amy Van Dyken, and how thrilled he is to be leading the Cowboys, in Part I of a special two-part 20 Question Tuesday.

1. After your accident, I struggled so much with wanting to do something for you -- but it turned out you only needed all of us to be who we all already were -- does that make sense?

Dave: It really does. What happens in a situation like that, it turns out the most important thing you can do is just listen -- you don’t have to solve a problem. There’s a lost art and appreciation for listening, and friendship.

2. I love how you always call me back when I text or message you on Facebook -- that matters to you, doesn’t it?

Dave: Yes, and that’s why it’s still so important to talk to people rather than just communicate through text or social media -- you can get things out on the table better in person or by talking on the phone. There’s just a lot to be said about true friendship.

3. How about ending up back in Wyoming -- was that a plan or did it just happen after you left Colorado Springs and the OTC?

Dave: Coming back to Wyoming was definitely a conscious decision. I wanted to be mentored by (Wyoming head coach Tom Johnson) T.J. for a couple of years. That got cut a little bit shorter than anticipated and I had the opportunity to slide into the head coaching role. 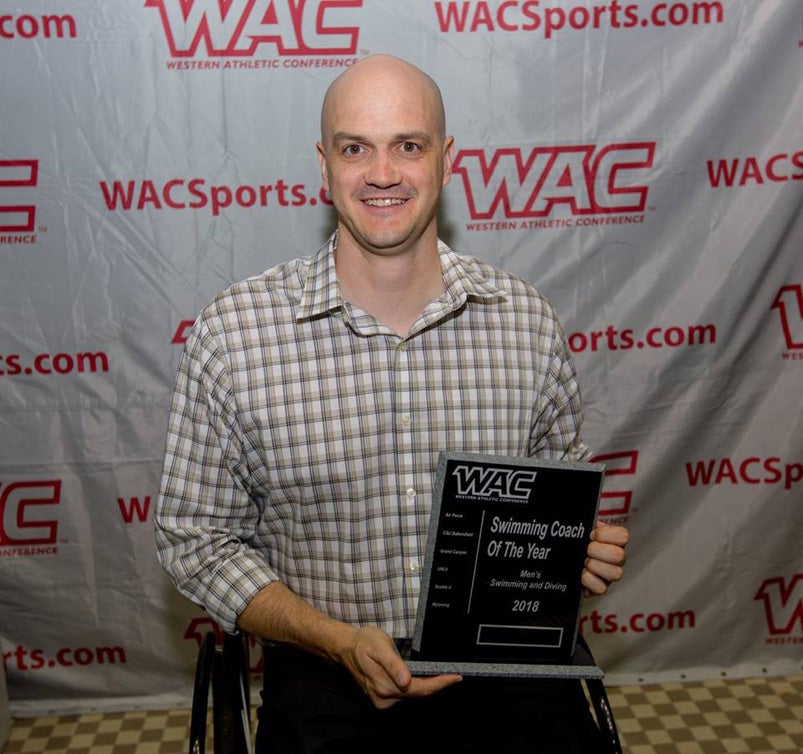 4. Your affection for the state only increased after the accident?

Dave: This is such a special place -- you’re a (University of Wyoming) alum, so you’ve experienced that. I love these people and this state. So in this role I feel like I can give back to the community and the state.

5. And I am guessing you are still loving all there is outdoors -- back in the day, the slogan was “Wyoming: A Great Land Outdoors” -- holds true still?

Dave: I love, love, love it. I saw my first big moose, a big pregnant cow moose the other day. Getting out and seeing all this is so fulfilling for me, and helps me keep a balance in my life. Having that here, and attaining that balance, leads to more happiness for me -- rather than getting entirely wrapped up in one aspect of your life.

6. You were able to reach Amy Van Dyken after she was paralyzed in an accident. What was that like?

Dave: It became another part of our friendship -- a special part of it. Amy is one of the first people in the sport I looked up to, kind of a hero and a rock star, who , like me, was in Colorado.

(Dave grew up in Wyoming but moved to Colorado when he started his sophomore year in high school).

7. The way she did that kind of paved the way and set a standard and path for Missy Franklin and Katie Ledecky, didn’t it?

Dave: Oh, to win four golds like that in Atlanta, I mean, I’ll never forget that. And then, I got to swim and train with her (at the OTC). She was the first superstar athlete I became friends with. The friendship part is there, the quirky sense of humor. We make each other laugh for hours on end.

8. So she has the accident and you are in a very unique spot as a friend who experienced that -- how did that affect you based on your own experience?

Dave: When her accident happened, and I might not have told you this before, but it was the first time someone I cared about became paralyzed.

9. I can’t fathom how much that must had affected you, and her -- what was that like?

Dave: It put a new perspective on the situation for me. I finally saw and experienced what people who cared and supported me felt -- and how helpless you feel right away as a friend wanting to do something. What is the right thing to do? When does it become invasive?

Dave: I went back to the basic -- I just needed to be her friend. Amy told people that I was a mentor, and that’s something very special to hear, but I was just trying to be there to support her and be her friend.

11. You have been a friend beyond the normal range talking to me about some depression I’ve been trying to work through over the years -- at first I thought, Why am I putting this on him, and you were just kind of like, “We all have something.” Where did you get that great perspective?

Dave: That’s been one of the biggest things for me, talking to people about that -- in my situation, being in a wheelchair, my challenge or disability is out in the open. I know before the accident, about like you with your depression, a lot of things can prevent us from living the life we want if we hold it inside. We all have factors that can limit us, some are known to other people, but many remain mostly or entirely unknown to others.

Dave: Exactly. We all have something we struggle with. Me being in a wheelchair, everyone can see that up front. And what it does is it opens up the conversation. I’m not uncomfortable talking about it.

13. So it changes the interactions -- makes it more real?

Dave: If anything, it helps get you away from the (laughs) dirty word “inspiration” -- people with disabilities hear that all the time. And I don’t mean that in a bad way, if anyone ever takes something away from that story, it’s a huge, great thing. But you’re not trying to live your life as an inspiration after you get paralyzed; you’re just trying to live your life. So, in a way, people who miss a limb, or are in a wheelchair, people who interact with them can see it up front -- whereas whatever issue the other person is dealing with might be below the surface.

14. You also always make people laugh -- what role has that sense of humor of yours played in all this?

Dave: Yeah, maybe I think I’m funny -- except (laughs) I’m becoming old and therefore my jokes are becoming old! There’s no one who will ever say laughter is a bad thing for your body. As long as you are not embarrassing or bullying people, laughter is part of the growing process. Laughter is universal. Everyone can connect to it. I love to laugh, even and especially at myself.

15. I used to take my kid out every weekend when I was in school at the University of Wyoming. We could just literally go any direction and find something wonderful -- where do you like to go?

Dave: I really do like being out in the mountains and seeing wildlife, and fishing. Plus, some of the best sunsets in the world are in Wyoming.

16. It’s ironic because when people hear I am from Wyoming they are sometimes like, “What do you even DO there?” and when I mention the outdoors, they don’t get that the outdoors is our playground, our movies, our amusement park, our gym, etc. Make sense?

Dave: Being outside and seeing nature is entertaining. And it also gets you away from the gadgetry of the office. This state, as you know, is a diamond in the rough. It is still so very unique, and the people are what make it great. Everyone who comes to swim here is just amazed by all there is to do outdoors.

17. The sparsest population in the nation per square mile. And not only the flagship state university, it’s the only four-year college in the state -- the pride people take, especially in ALL the UWYO sports, seems unique, isn’t it?

Dave: Being the only university in the state, sports are a big deal. But based on the state being so unique with its outdoors, natural resources, and so on, it allows for a lot of balance for the university in that sports are a big deal, but this is not a major college where fans are going to pay 50k a year to be a football fan. So it’s not over the top. It’s a social thing to do in which they take great pride because it is the University of Wyoming and we are all ambassadors for this great state.

18. I liked how kids who go to school there go there to get an education -- that allowed for really motivated students when I taught as a graduate student. And I had several swimmers, all highly motivated. Is that your impression?

Dave: It is, and that’s part of the reason they choose this university. It is definitely not a party school. The academics are top notch. We have one of the best engineering schools in the country. But we have several other colleges that are also among the top in their academic discipline. So all of this balance allows us to stay out of being too extreme about anything, and I think that’s what makes it great for students.

19. After your accident, you actually went even more places as a swimmer and then as a swim coach -- how important is that to you, to see more of the world and experience more, not less?

Dave: What it’s done has created a desire to see more people, see more places. I live in a bit of a bubble, so having diverse experiences is important.

20. What is one of those places up next, maybe a place that you have not seen yet?

Dave: People who don’t know my story might not know that I was getting ready to go work in New Zealand when I broke my back. That was part of the reason I came up (to Wyoming) to the cabin to go sledding because I knew I’d be gone for a long time. So, to this day, I never did go to New Zealand. And now, I am marrying this wonderful woman, Jenn (Kreuter), and we decided New Zealand would be a great place to go (for the honeymoon). And ironically, since I joined the staff at Wyoming, I have had two athletes from New Zealand who told us things to do and places to go when we get there. These wonderful friendships continue to guide my life and I am so excited for what the future holds.

Next week in Part II, Dave talks about who mentored him, and how important those lessons were and are in his life to this day.