Bobby Bollier learned numerous lessons in hard work, determination and perseverance over the course of his competitive swimming career.

He also learned that when you put everything into something, there’s always something to take out.

And even though he narrowly missed his ultimate goal of swimming at the Olympics, Bollier, who retired at the conclusion of the 2016 Olympic Trials, never regretted the commitment he made to his sport.

“Swimming was always about doing my best today so that tomorrow would be better, and that mindset still propels me forward to this day even outside of the pool,” he said. “Yes, it is difficult when you set aside thousands of hours to something and don't reach your goal.

But I accomplished enough in my career to recognize that I still had a complete swimming experience regardless.”

With his competitive swimming days behind him, Bollier moved back to his hometown of Kansas City shortly after Trials. Currently, he’s working as a design engineer at a small company called RMF.

Manufacturers of freezers and food processing equipment, he works specifically on conveyor belts and their massive conveyor belt freezers.

“They fabricate most of the equipment in a factory on-site, so it's pretty amazing to take a step outside the office and be able to see last month's project taking shape,” he said.

But even with his full-time work, Bollier, who is also studying to take the LSAT to study patent law in the near future, remains active in the sport – as a coach.

He’s working as an assistant coach at his former club – the Kansas City Blazers – starting as the coach of the Senior I group and now remaining involved as a substitute coach and weights instructor.

“It's been very refreshing to approach swimming from a different perspective,” he said. “The swimming community is, ultimately, a pillar of who I am, so it's both humbling and rewarding to have had an opportunity to stay involved and to share what I have received.”

After finishing one spot away (third in the 200 butterfly) from earning a seat on the plane to London for the 2012 Olympics, Bollier decided to keep pushing forward to 2016 and Rio despite complications from his allergy-induced asthma that made training and competing more and more challenging every year.

Following the 2012 Trials, he made an agreement with himself that 2016 would be it for his competitive swimming career regardless of what happened in Omaha.

So, when he finished 10th in the 200 fly, he knew he had taken his competitive swimming career as far as he could and walked away from the sport as a competitor.

“My lungs were saying, ’enough!’ by that point,” said Bollier, who was diagnosed with asthma when he was 15. “My allergy-induced asthma got pretty severe toward the end of my career. It was exhausting, and I was physically and emotionally ready to hang it up when I did.

“For most of my career, a simple albuterol inhaler and a glucocorticosteriod inhaler proved to be enough to keep the symptoms at bay. By 2015, though, my symptoms had gotten worse. I had a chronic cough and was getting upper respiratory infections a little too frequently. This is when I started taking allergy shots to minimize the impact of that problem.” 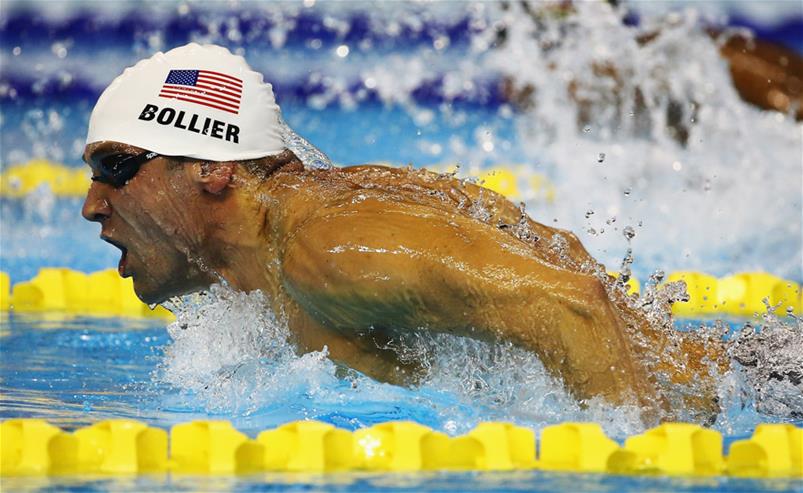 As the younger child in his family, Bollier became involved with swimming because his big sister was a swimmer and he wanted to do what she did.

They both loved going to the pool in the summer, so it was easy for him to follow in her footsteps.

“I loved swimming when I was young because it was a way for me to learn something in a very different way from what we did in school,” he said. “Learning a sport is a challenge every single day.

“In pretty much every respect, that admiration for learning drove me through my swimming career. It also made it easy for me to see how my hard work was paying off. There is always an opportunity to learn and grow, both in success and failure.”

Now that’s he’s been away from competition for almost two years, Bollier said he’s had time to reflect upon his career and all that swimming gave and taught him.

First and foremost, he said he’s most proud of his daily dedication – that swimming was always about doing his best.

His career highlight outside of nearly making the Olympic team was his National Title in the 200 fly at the 2011 Phillips 66 USA Swimming National Championships in his training lane in the Belardi Pool at Stanford, his alma mater.

He also was a member of the 2009 and 2011 World University Games teams, bringing home two silver medals, and the 2015 Pan American Games Team, where he won a relay silver medal.

And while he left with no actual performance regrets, Bollier said he wished in retrospect that he had started taking allergy shots earlier in his career because of their impact upon his breathing and ultimately his swimming during practice and competition.

Still, he knows today that swimming gave him so much more than he could ever repay.

“Swimming gave me an entirely different way to look at problems and how to solve them,” he said. “I learned that success was within my reach, but that it took hard work, dedication, and patience. I am grateful that my family and coaches remained supportive throughout my swimming career without pulling me out of the driver's seat.

“Having some level of autonomy kept the pressure away and allowed me to track my own goals and find my own success. I encourage swimmers and their coaches and families to maintain a discussion about who wants to succeed the most. If everyone's invested but the swimmer is on top, this is the framework for success regardless of external pressures.”