A self-described “awful” swimmer (not really), Tyler Fenwick always knew if he was going to make a splash in the sport, it wouldn’t be as a competitor.

“Looking back, I wasn’t really as committed as I could have been,” he said. “But when you’re swimming with Fran Crippen every day, it can be a little intimidating.’

Still, with a deep love for swimming and an insatiable desire and determination to learn – and help others learn – Fenwick realized his true calling wasn’t as a breaststroker but as a coach and mentor.

It’s a role – and responsibility – he takes very seriously. And having risen quickly through the ranks working with and learning from some of the best coaches in the business, Fenwick knows his professional life has taken the best overall path for him.

And there’s still a lot more to come. 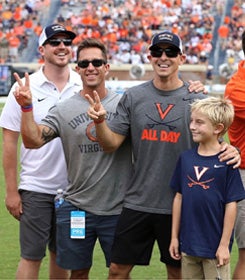 “I know I’ve really grown as a coach because I have had my hands on everything – fly, back, free, kids, teenagers, young adults, National Team swimmers, you name it,” said Fenwick, who is in Minneapolis this week helping coach the University of Virginia men at NCAA Championships.

“When I was starting out in coaching, I knew a few things from having watched my high school and college coaches. But I’ve definitely made strides since then.”

Fenwick attended and swam for the historic and uber-successful Germantown Academy. And while there competing and learning alongside great swimmers like Maddy, Fran and Teresa Crippen, among many others, he said he learned a lot about how to coach from watching Dick Shoulberg closely in practice.

“He was amazing to watch – the way he got the best out of his athletes,” Fenwick said. “I fell in love with the way he ran things before, during and after practice. He was a great teacher and I watched him like a hawk.”

Before graduating from Germantown to go on to swim at the College of William and Mary, Fenwick assumed some duties of an assistant coach – and got the bug that would carry him to his current position as an assistant head coach in Charlottesville.

At William and Mary, he again learned by watching, and after graduating, he thought he wanted a career in law, so he attended the Widener University School of Law and graduated before realizing he didn’t really enjoy practicing law at all.

He struggled through his days working at a firm before happily helping Shoulberg at Germantown in the evenings.

It didn’t take long for him to realize swimming – and coaching – were his true callings.

“I quickly learned that law wasn’t for me; I hated it, but I’m glad I went through law school because it actually helped me become a better coach in the long run,” he said.

Instead of law, Fenwick decided to return to school where he could get his Master’s degree and become a graduate assistant coach.

“I landed a graduate assistant position at the University of Tennessee with Matt Kreidich, working with Olympic and National Team swimmers like Christine Magnusson and Davis Tarwater. “I actually worked just with the women’s program, but during my time there, Christine won the 100 butterfly at Olympic Trials and went on to win silver in the Olympics in Beijing in 2008.

“It was a great learning experience for me. Matt builds tremendous relationships with his swimmers while building their skills and increasing their speed.”

After graduating in 2009, Fenwick spent several years coaching on the west coast with the Mission Viejo Nadadores and working with distance coaching great Bill Rose.

For the next three years, he said he soaked in everything Rose taught him – although he admits he could have been more patient in absorbing all that his mentor had to share with him.

He had his own group of swimmers he worked with daily – and they were highly focused and competitive.

It was during this time – and because of his friendship with Fran, who passed away during an Open Water competition in 2010 – that Fenwick said he focused more and more of his coaching attention and learning toward Open Water.

“Bill truly became my mentor and that evolved into a friendship we maintain today,” he said. “We talk about swimming, life – whatever comes up. I learned so much from him, particularly about coaching distance and open water swimmers. It was an invaluable experience.”

While he wasn’t looking to leave, Fenwick received a call from Kreidich about a full-time assistant position back in Knoxville – gauging if he still had any orange blood left in him.

Despite loving his life in Los Angeles, Fenwick returned to Tennessee and became Kreidich’s No. 2 coach, again helping guide several swimmers to the 2012 Olympic Trials.

Almost a year ago, new Virginia head coach Todd DeSorbo called Fenwick out of the blue and inquired about his interest in joining him in coaching the combined men’s and women’s programs in Charlottesville.

Having visited the Virginia campus many times to hang out with his former Germantown teammates and friends who went to school there – most notably Fran – Fenwick loved the city and realized it was an opportunity that might come around again.

So, he took a leap of faith and made the move last August.

Being just a few hours from family back in the Philadelphia area as well as New York and Washington, D.C. and other cities along the East Coast, Fenwick said he’s been incredibly happy with his decision despite his love for and allegiance to Kreidich and the Volunteers.

Nearing the completion of his first season as a Cavalier, Fenwick said he’s excited for NCAA Championships as well as upcoming Open Water Nationals and Phillips 66 USA Swimming National Championships this spring and summer.

“It’s pivotal because these are a couple of the final teams that will be chosen before Olympic Trials in 2020, so being part of them is important looking toward the Tokyo Olympics.”

And as far as his own coaching philosophy is concerned, Fenwick said it truly is an amalgamation of every coach he has worked with or swam with during his lifetime.

“To single any one of them out as the great influence in my life would be wrong and incomplete,” he said. “I learned something from every one of them and then have taken that knowledge to form my own coaching philosophy that starts with forming strong relationships with my athletes.

“I absolutely love what I do and love working with the athletes. Swimming has always been my anchor, and now I get to do it every day by helping swimmers become better. It’s allowed me to spread my wings in the sport that has given me so much in my life.”