Each year, some of our most popular features in Splash Magazine are those about college swimming.

It’s our philosophy that if a swimmer really wants to continue swimming in college, there’s a program out there somewhere that would be a perfect fit.

But where to begin? What are some of the options out there available to you? What are coaches looking for? What about scholarships?

With the NCAA Swimming and Diving Championships taking place throughout the month of March, we thought our Spring issue would be the perfect place to shed some light on the various factors you should consider if you want to participate in college swimming.

The Spring 2018 issue of Splash will soon be in mailboxes. In the meantime, here’s a story about an option most people don’t think of – college club swimming. 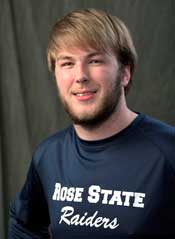 Heeding the advice of his high school swimming coach, Rose St. College (Midwest City, Okla.) sophomore Greyson Wolf (pictured above, and right), a freestyle and butterfly swimmer, submitted a plea in his senior year at nearby Del City HS to the college’s athletics director.

The letter to Joe Davault, the AD at the community college just east of Oklahoma City, went over so well that he cites it as one of the reasons a swimming club is in its second year there.  “It was just really moving,” said Davault, who paused before he finished his thought.  “About the opportunity that he would like to visit with me.”

Having already committed to Rose St. as a high school junior, Wolf was excited about the talk of it possibly becoming the first community college in the state to offer swimming.  Even if it were just a club sport, for Wolf it was all about the opportunity.  “If you think about the state of Oklahoma itself, the opportunity for swimmers is very limited,” he said.

Indeed, only two four-year schools in Oklahoma, each in the OKC area have varsity swimming—NCAA Division II universities Oklahoma Christian and Oklahoma Baptist.  Last Dec., after the fall semester, St. Gregory’s University a short distance from OBU in Shawnee, Okla., closed its doors.  As a result, there was one less collegiate varsity swimming program in the state.

“I didn’t care if it was just me and I got the opportunity,” said Wolf, an engineering major who plans to continue his studies in the fall at Oklahoma State, which has the only other college club team in the state. “I really wanted it to continue be a legacy and people after me to have the opportunity.”

Davault felt obliged to grant Wolf’s request.  He said, “That started the ball rolling for me to look at and talk with our president (Dr. Jeanie Webb) on, ‘What are the opportunities that we can offer for students?’”

On the last day of the Oklahoma state high school competition, Wolf and teammate Ryan Wade looked at each other thinking that it would be the last time they’d compete together.  “It hadn’t quite sunk in yet,” said Wolf.  “That was the moment when I went, ‘Omigosh, this really is the last time.  Do I want it to be the last time?’  Right after state happened is when the gears started turning.”

This season, Wolf and Wade are teammates at Rose St.

The start-up of the swimming club at Rose St. comes on the heels of a remodeling project at the Rose St. Aquatics Center on campus.  Just before the first year of its competition in the fall of ’16 against other colleges in the region with swimming clubs, the aquatics center polished itself up with a new look compared to when the 50-meter pool’s original construction was finished in 1982.  “The only thing in that aquatics center that is original is the concrete of the original pool,” said Chris Leland, the Rose St. director of health and wellness.

There has been no shortage of talent to come out of the OKC area.  Most notably, before he went off to college at the University of Minnesota, two-time 2016 Olympic medalist David Plummer can boast of his swimming roots in OKC.  He competed at Westmoore HS in the south part of the city that included residents of OKC and Moore, better known as a town ravaged by two devastating tornadoes in 1999 and 2013.

Swimming took a hit recently when young swimmers from around where Plummer grew up had to scramble after 2015 for swimming opportunities when Oklahoma City Community College (OCCC) closed its 50-meter pool built for the 1989 U.S. Olympic Festival.  High schools in Moore followed suit by wiping out their swimming programs, so Rose St. has since then taken on the task of accommodating swimmers for their youth programs.  Currently, four high school teams also use the on-campus aquatics center.

Rose St. is no exception to higher education feeling the state’s budget crunch.  That’s why Rose State’s swimming is a club status rather than a sanctioned NJCAA sport like other sports at the college.

“Our board and our president are looking at all the programs because, not only are we in budget reduction, but when you have to possibly close down (academic) departments and those type of things, we’re still in evaluation and that might take a while quite honestly,” said Davault.

As it is, the Rose St. swimming club under coach Kim Queri and her assistant, Blake Shawn, is funded through private donors and sponsors in addition to their efforts to raise money through bake sales et al to help with travel costs for their road meets.

“Kim (Queri) and Blake (Shawn) have been the stars of this.  They really have,” said Davault.  “Out there in the community and pushing this program, Kim has talked with a lot of people about supporting this program.”

“Since we’ve been doing it, you’ve seen that club level rise,” said Shawn.  “I don’t think a lot of people actually knew about it at a college club level.”

For Wolf, it’s not just about competing.

“Everyone says in college you gain a bunch of weight.  I wanted to try to stay in shape somewhat,” said Wolf.  “I enjoy it and I thought, ‘Why not? Who’s telling me I can’t? What’s stopping me?’”

Wolf said there’s also the camaraderie aspect. In its first year of club competition, Rose St. listed 12 swimmers on its roster.  This year there are 13.

Between balancing swimming and his engineering studies, Wolf said it’s a challenge.  “I would not say it’s been very easy, but I’ve learned a lot.  It has helped me grow as a person.”

Wolf hopes that spreads to other clubs around the country.