Pam Swander has an extensive coaching resume that 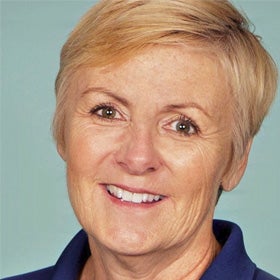 spans more than thirty years and Level Five career certified coach. Her career includes founding and managing a swim club, establishing Swim America programs, coaching at the high school, age group, senior and collegiate levels, and recruiting for and running prestigious summer swim camps. She has served as the Director of USA Swimming’s Select Camp, Vice Chair of Hospitality on the U.S..

Olympic Trials Committee, and the Indiana Swimming Delegate at the USA National Convention. Her achievements were recognized in 2011 with an induction into the Delaware County (Muncie, IND.) Athletic Hall of Fame, and Swander was the keynote speaker at the 2014 Women in Coaching Clinic in Stanford, California

She is married Jeff Swander in 1979, and their two children, Laura and Kevin became top swimmers at Auburn University and Indiana University, respectively