Coach Crystal Keelan was a competitive swimmer from 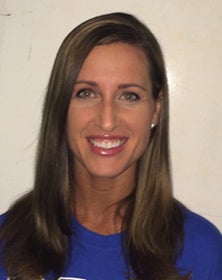 age 7 through college. Her coaching career began when working as an assistant summer coach for Northampton Swim Team from 2000- 2004. Helping swimmers acquire a love for the sport while meeting their personal goals was the reason she immediately developed a passion for swimming beyond her own racing career.

After college, she began coaching at Lower Moreland Lightning (LMOR) as an assistant coach under Dawn Pachence from 2004- 2007. This position continued each long course season through 2010. Crystal took over the LMOR-USA head coach position during the 2011 summer season when Coach Pachence was out on maternity leave. During her time at LMOR she coached and mentored Junior Olympic champions, Zone Team finalists, Super Sectional finalists &amp; Junior/Senior National qualifiers.

In August 2007, Crystal was offered the Head Coach position at Council Rock (CRSC), and took over both the boys and girls SAL teams. During the course of Crystal’s 5 years as the CRSC Head Coach, the SAL team grew to over 230 swimmers. Council Rock’s Individual and team accomplishments improved each year; during the 2011-12 season both the boys and girls teams swam undefeated to win the SAL Eastern Division for the first time in over 35 years. In 2007 the CRSC-USA team had 2 members; Crystal reignited the struggling USA program which grew to 50 members strong.  Under her tutelage more than half of the CRSC-USA team qualified for Junior Olympics while a number of swimmers qualified for Eastern Zones, Speedo Sectionals and Super Sectionals. Crystal accepted the position of Head Age Group coach at PCAC in the fall of 2012. That same spring she took over as overall Head Coach of PCAC and has continued in that role since. In her time at Penn Charter, she has coached her swimmers to qualify for numerous championship meets including national level meets including: Futures, Junior Nationals, Pro Series meets, Nationals and Olympic Trials. Team records in all age groups have gone down time and time again over the years as the culture of the team is to work above and beyond expectations.