Jason Lezak Analyzes Team's Performance in Second Round of #USASwimSquads

Last week at the TYR Pro Swim Series in Atlanta, the results for the second round of #USASwimSquads were a lot closer than they were at the first stop in Austin.

The top three teams were separated by just eight points. Kaitlin Sandeno’s team emerged victorious with 79 points, followed by Team Coughlin with 72 points and Team Krayzelburg with 71 points. Bringing up the rear was Team Lezak with 52 points.

After two rounds of #USA SwimSquads, the Krayzelburg squad leads overall with 178 points. The Coughlin Squad gained some ground in Atlanta and currently sits in second with 160 points. Not far behind is Sandeno with 155 points, while Lezak is fourth with 119 points.

Lezak now finds himself quite a hole, so let’s take a look at where things went right and wrong for him in Atlanta: 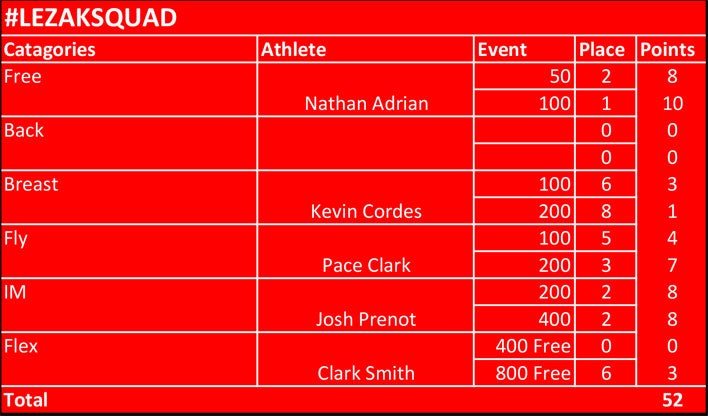 Just as in Austin, he got an MVP showing from sprinter Nathan Adrian, who took first in the 100 free and second in the 50. Josh Prenot also scored some points for him with second-place finishes in the 200 and 400 IM, and Pace Clark’s third-place finish in the 200 fly didn’t hurt, either.

So where did he go wrong? He had no backstrokers competing at this meet. Tough break. But don’t count Lezak out, yet. He was known as a strong back-halfer in his swimming days, so he’ll have to tap into that talent again for the last three meets of the TYR Pro Swim Series. 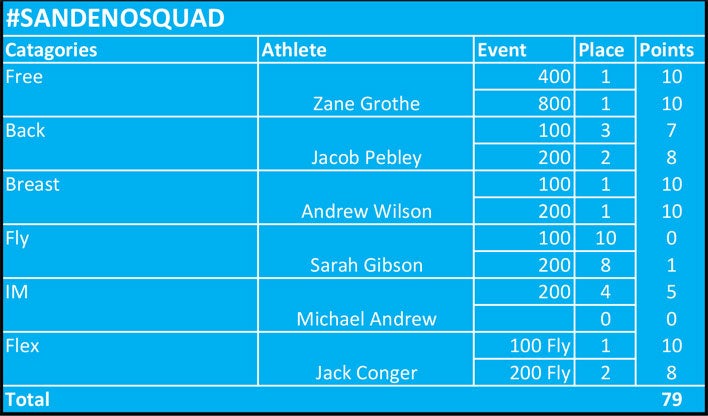 In contrast, everything was coming up Sandeno in Atlanta. Her swimmers had five first place finishes, including Zane Grothe in the 400 and 800 free, Andrew Wilson in the 100 and 200 breast, and Jack Conger in the 100 fly. Conger also finished second in the 200 fly, and Sandeno also got a second- and third-place finish from Jacob Pebley in the 200 and 100 back. 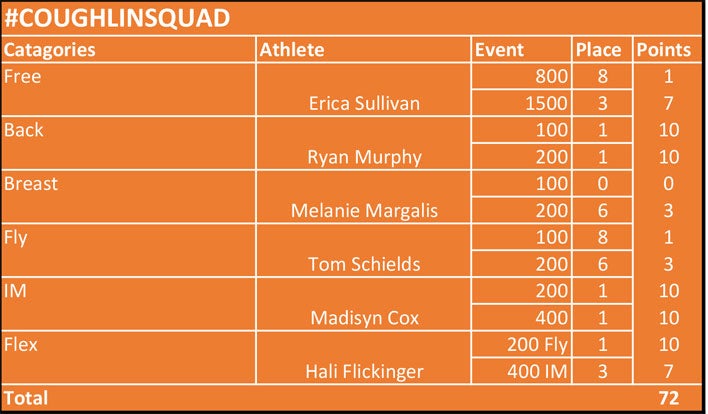 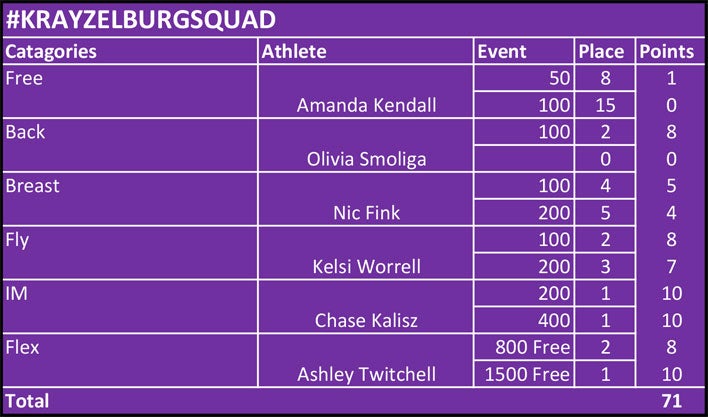 Krayzelburg’s MVP was Chase Kalisz, who took first in the 200 and 400 IM. Ashley Twichell scored a first and a second for Lenny in the 1500 and 800 free. Kelsi Worrell was second and third for Team Krayzelburg in the 100 and 200 fly, while Olivia Smoliga was second in the 100 back.

Can Krayzelburg hold his lead? Will Coughlin and Sandeno keep chipping away? Can Lezak climb out of the hole? Be sure to catch the next round of #USASwimSquads at the TYR Pro Swim Series at Mesa, April 12-15.