Andie Taylor always suspected people thought she was weird for loving training as much as she did.

And even though she’s been retired from competitive swimming for almost four years now, she still enjoys a hard workout today.

“I still really enjoy working out (today mostly in the form 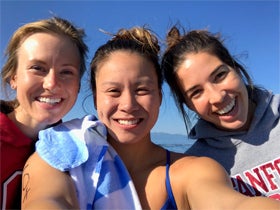 of running, cycling, and going to work out classes), but I will never forget that unique feeling of utter exhaustion combined with incredible satisfaction after completing a Saturday morning practice,” she said.

Taylor – who excelled nationally at the club level before spending four very successful seasons as an All-American swimmer and excellent student at Stanford – remembers one hard workout in particular as especially satisfying and career affirming.

At a National Team training camp in Chula Vista, Calif., in 2009, she was still a young, wide-eyed club swimmer, and it was the first time she had the chance to train alongside some of the big names in the sport.

“I remember being totally intimidated, doing everything I could to keep up and not be the slowest,” she said. “This was also my first exposure to Jon Urbanchek’s ‘color’ sets, which I remember him explaining as follows: ‘This is purple pace – like the color of your face when you swim them.’ I wasn’t sure what I was in for.”

But that experience led to one of her best swims to date – a 400 individual medley “get-out swim” to get everyone out of the workout early.

“I went my best time ever, determined not to anger a deck full of National Teamers and get blamed for prolonging practice,” she said.

Her start in the sport came a bit later than lots of swimmers. Taylor grew up playing basketball, baseball, gymnastics and basically any other sport her brother played.

She started swimming summer league at her neighborhood country club early on as an excuse to spend more time with neighborhood friends who were already on the team.

“I always loved the water, so when my parents gave me the chance to try a sport that let me spend more time in the pool, I quickly grew to love it,” She said. “I started year-around club swimming for the Issaquah Swim Team when I was 11, and grew more serious about the sport from there.”

Taylor dropped basketball her freshman year to devote her energy to swimming. Her commute to practice was an hour each way.

Car time to and from everything was optimized for eating, napping and homework.

“I joke now that my future children will not be swimmers because of how much shuttling back and forth to practice I saw my parents do,” she said. “I certainly could not have done it without my parents -- the 4:15 a.m. alarm for morning practice was not pleasant for them either, I’m sure.”

And while she enjoyed a solid career internationally – she did make two A finals at the 2011 World University Games and competed in several Phillips 66 USA Swimming National Championships and the 2007 Junior Pan American Games – Taylor said the real payoff from her experiences in the pool came in the form of lasting relationships and life lessons she uses in her daily life.

“I was skiing with (Stanford teammates and friends) 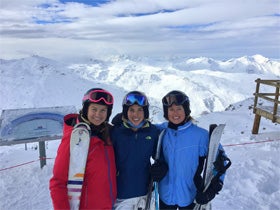 Felicia (Lee) and Maya (DiRado) last weekend, and we were talking about how fun it would be in the future, when we all have our own families, to organize ski trips together,” Taylor said. “These are things that swimming provided -- lifelong relationships with some pretty incredible, beautiful, successful and motivated people.

“These are the people I’ll turn to during the most challenging moments, and those with whom I’ll share the moments that are most exciting. I remember my first coach at Stanford, Lea Maurer, saying something like this to us one day during a team meeting: ‘Look around at your teammates. These are the women who you’ll tell first when you get engaged, and who you’ll call first when you become pregnant.’ I’m convinced she was right.”

Since she retired in 2014 – deciding to end her swimming 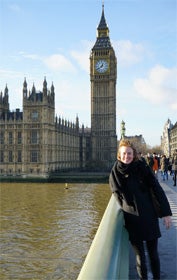 career after her final race at NCAA Championships – Taylor has lived abroad and traveled extensively through Europe during and after her graduate work at the London School of Economics.

Originally planning to be a doctor (she earned her degree in Human Biology with a pre-med focus at Stanford), near the end of her studies at Stanford, she became interested in other aspects of health like public health, global health, healthcare policy, etc.

Those interests ended up changing her focus less on the side of practicing medicine and making sure people have opportunities and access to healthcare options.

“I hadn’t planned on going back to graduate school right away, but one of my Stanford classmates was about to head off to the London School of Economics, and as she was telling me about it, I got seriously interested,” she said. “I had never set foot in London or anywhere else in the United Kingdom before moving over there, but I’d heard only fantastic things.

She ended up applying to the LSE’s master’s program in Global Health, which is essentially a program in healthcare economics – taking a deep dive into the healthcare systems around the world, and the mechanisms that make them efficient/inefficient.

After her graduate work was finished (it was a one-year program through Stanford connections), Taylor returned to the states, landing in San Francisco with what she calls a “cohort of fellow swammers.”

She recently started working as part of the Analytics team at Ground Rounds, a healthcare technology company which helps connect patients with the most effective healthcare options available to them using the company’s technology platform – the goal being to help patients navigate the rather complex American healthcare system.

She said she loves this post-swimming phase of her life while still being able to stay connected largely through the relationships she maintains with former teammates and friends.

And while she never experienced the thrill of swimming in the Olympics, Taylor said she knows she made the right decision for her when she stopped competing.

“I always had high goals and expectations for myself but didn’t really feel too much pressure beyond the pressure that I placed on myself,” she said. “Perhaps because I was always surrounded by elite swimmers who were faster than I was -- both at the club level and at Stanford.

“My performances at Olympic Trials were never my best, and I did not have that opportunity (to compete at the Olympics). However, seeing my friends and teammates make the team and compete in the Olympics has been a blast.”