It’s something he sees as unnecessary and final – and he’s not ready to do that yet.

“I don’t really believe in retirement; why would I want to officially leave something that I love as much as swimming?” he asked from his home in Austin, Texas. “It doesn’t make much sense to me. I don’t believe I’ll ever officially retire from anything – including work. It’s just too final.”

While he said he’s not planning a comeback to competition anytime soon (but never say never), Weber-Gale – a member of the 2008 Olympic team and men’s 400 freestyle relay team that memorably came back to beat France – continues to undergo drug testing while spending his time as a husband, new father and CEO of the University of Texas Acton School of Business.

He and wife, Kara, welcomed son, Gideon, into their family 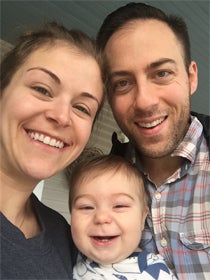 in June 2017 – a few days before they closed on their first house and before he took over his current post at the Acton School.

Suffice it to say, all of that positive change has impacted his life in equally positive ways – especially in relation to Gideon.

“He is literally the most fulfilling thing in my life – way beyond any medal or record from swimming,” said Weber-Gale, who won medals at four consecutive World Championships between 2005 and 2011.

“He does new things all the time. Just the other day, he grabbed his sippy cup and pulled himself up and walked with his walking toy. He’s already been in the pool – doing his underwaters at 2 months old – and he loves the water.”

The University holds a special place in his life and identity – as he swam for and attended Texas as an undergraduate before returning several years later to get his MBA in entrepreneurship from the Acton School.

A born entrepreneur (he started his first business when he was 12), Weber-Gale took his entrepreneurship to next levels in 2014 when he founded Athletic Foodie, the sports performance company that makes snacks specifically designed to help athletes get the nutrition they need to perform at their best.

He started the company after being diagnosed with high blood pressure, and due to strict drug regulations, Weber-Gale had to be extremely careful about the medications he used. He ultimately addressed the issue by changing his diet.

“Going around and raising capital from investors and then being a good steward of that money was always important to me.”

When he decided to return to college for his MBA, his took a break from Athletic Foodie to focus on his education and eventually closed the business after he graduated to pursue other interests – giving back the unused money to investors in a rare move.

“I didn’t want to put my investors’ money unnecessarily at risk, so it made good ethical business sense to return it to them,” said Weber-Gale, who was inducted into the International Jewish Sports Hall of Fame in 2015.

Nonetheless, he credits his own personal entrepreneurial endeavors with his desire to want to positively impact the lives of other independent thinkers at the Acton School.

That and his ability to excitedly make it through 10 interviews with a variety of leaders, staff and faculty to make sure he was the right fit for the position and organization.

He likens the experience to the excitement he felt behind the blocks or on the blocks before a race – having the same energy in the pit of his stomach and ready to conquer.

“The program absolutely changed my life while I was a student, and the opportunity to do that for other students was such a great fit for me,” he said. “I love knowing that I can help make a small contribution to their lives by painting my vision for the school. It’s an honor and privilege.

“I look at it this way. Students are our customers – we’re providing education and experience for them so when they are done, they have what they need to create and grow their businesses. I had that for years with Athletic Foodie – giving other athletes nutritional snacks that they knew were good for them. It feels good to know I’m doing something to help others in the same way.”