During his final semester at the University of Michigan, Charlie Houchin was challenged by one of his business professors to think outside the box.

Or in his case, outside of the pool.

“I’d been staring at that black line at the bottom of the pool for 20 years, and I realized after thinking it (his challenge) over that the strength in swimming is participation and I could do something to help the sport outside of the water in that capacity,” he said. “From there, Meet Central grew and evolved into what it is today.”

Not knowing what he wanted to do professionally beyond swimming after graduation, Houchin wrote the business plan for Meet Central – a product of his company, HydroXphere – that semester.

And while he continued to chase his swimming dreams, he also spent the next couple of years developing the Meet Central App – focusing on ease of use and accessibility.

The App helps meet directors – most of whom are swim parents, some well-versed in running meets and keeping times and others who are just beginning to learn the processes – keep accurate times at summer league competitions that don’t use Touchpads.

Since everything is recorded through the app, the days of keeping track of times and results by paper, clipboards and stopwatches are unnecessary. 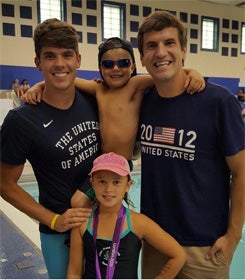 the meet simpler while remaining very accurate,” he said. “Having been to many, many meets of all kinds and levels during my career, I saw an opportunity to simplify the process so parents and meet organizers could enjoy the experience with their children and not have to worry about the paper trail.”

While the idea for the Meet Central App was predominantly on his mind since 2010, Houchin also achieved many of his swim goals – highlighted by a spot on the 800 freestyle relay team that won gold at the 2012 Olympic Games in London.

A year later – his last truly dedicated to swimming – Houchin added another gold medal in the 800 freestyle at 2013 World Championships in Barcelona.

These medals were added to the individual gold medal he won in the 400 freestyle and the 800 freestyle relay gold he won at 2011 Pan American Games in Guadalajara.

Although he swam for another year leading up to 2014 Phillips 66 USA Swimming National Championships, Houchin said he spent more and more time that season focusing on the business and less on swimming.

He swam one event at Nationals – his signature 200 freestyle – and announced his retirement shortly thereafter.

“I knew my priorities had shifted from swimming to growing the company, and my passion was about building the software, hiring and promoting the App and less about swimming,” said Houchin, who runs the business from Raleigh, N.C., not far from his hometown and family.

“For 2014, my intention was to do both, but after we launched in, I knew I needed to focus on Meet Central and Hydrosphere. It was time.”

Since then, Houchin and his growing team of 6 (mostly former swimmers) have been able to place Meet Central with teams and leagues in 20 states and 5 countries – positively impacting the lives of thousands of swimmers and their parents.

And this is just the beginning as they connect with more and more meet organizers who understand the value and ease that Meet Central brings to meet administration and times recording.

“USA Swimming has about 400,000 members, but swimming in the United States and world is much, much bigger than that, and not all the meets have the Touchpad technology that automatically records times when swimmers hit the wall,” he said.

“Meet Central makes this much easier than hand recording times with stopwatches that still happens at summer league meets. Anyone with the App can easily keep track of the times and record them.”

And while he doesn’t take a dip in the pool very often these days, Houchin said he stays in shape by lifting weights and doing other activities.

But because of the App, he stays involved with swimming and loves the part of his job where he stays connected to the sport and the young swimmers of the world.

Not bad for someone who never thought of himself as the entrepreneurial type – or really knew what being an entrepreneur entailed until he was waist-deep in the business.

“We’ve gotten some great feedback from our users, and they really like that it’s clean, simple and easy to use no matter how technologically savvy you might be,” he said. “We stripped the complication out of the product as we wanted anyone to be able to use it. That’s the beauty of Meet Central.

“Knowing that this is helping swimming and swimmers at the grassroots level is what drives me and the team. We want to power every swim meet on the planet, and we have the team that can make that happen. It’s an exciting time for our company and for swimming, and we’re excited to be part of it all.”