When it became clear she was ready to retire from competitive swimming and move forward into the next phase of her life, Emily Brunemann Klueh knew she needed to do something emphatic and personal for a smooth transition.

Knowing it could be difficult leaving behind something 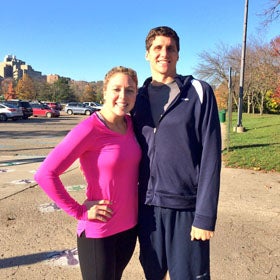 that became more than just a sport, Klueh said she chose to channel that love into her work, her marriage (to fellow swimmer Michael Klueh) and ultimately herself.

“Finding a passion away from the sport of swimming has been significant in helping us move on from the sport,” she said of both her and Michael, who also recently retired from the sport and is now in medical school. “While we are both very busy we support each other and respect each other’s passions. Being able to come home and talk about our days is one of my favorite things.”

Since retiring in November 2016, Klueh has been focusing on her career as a Performance Psychology Athlete Counseling Counselor in the University of Michigan Athletic Department as well as the Program Coordinator for Athletes Connected at her alma mater. She started her position with Michigan in January 2017 and has been part of Athletes Connected since 2014.

“I was close to completing my Master’s degree, doors were starting to open and I was ready to dive into my next passion,” she said. “I had given the sport everything I had and achieved more than I ever thought I would.”

Within this role, she is responsible for providing direct clinical care with student athletes, consulting with coaches and conducting team presentations and educational programming. She also works interactively with support staff across the athletic departments throughout the country.

In the evenings, she coaches the Cubs group (4-8 years old) at Club Wolverine and said she absolutely loves working with these youngsters just getting into the world of swimming.

“They have such genuine excitement,” said Klueh, who makes time to sit on six different committees within USA Swimming and Michigan swimming. “I also created a mental health and sport performance program for Club Wolverine. I work primarily with the intermediate, senior and national level kids.

“We discuss different educational topics and we discuss how they can implement these skills daily. I consult with the club wolverine coaches when needed on sport performance and mental health concerns. Life is very busy.”

A busy life is nothing new to Klueh, who swam for the University of Michigan while attending college, earning multiple All-America honors during her time as a student in Ann Arbor.

She met Michael at the 2008 Olympic Trials, and although she admits they had no idea what was in store for them (he was still a student athlete at Texas while she was at Michigan), they maintained a long-distance relationship.

They were married in the fall of 2014, and Michael relocated to Ann Arbor while Emily finished her master’s program. They both swam for Club Wolverine before ultimately deciding it was time to retire and move on with the rest of their non-competitive swimming lives.

Now, in her current work role, Klueh said she wears many different hats – and that’s what she loves most about what she does.

And staying connected to swimming and athletes has also helped her smoothly make the transition from world-class open water swimmer.

“Working individually with student athletes is incredible; conducting team presentations allows me to engage with groups; and Athletes Connected helps to make an impact primarily for the student athletes at Michigan but truly across the country,” she said. “My job has so much balance and so many facets that I find really important.”

A member of several National and international pool and Open Water teams during her competitive career, Klueh said she never regretted not being able to represent the United States at the Olympics.

For her, she took her swimming career far beyond where she thought she would so everything after college was mostly gravy that took her around the world and opened doors to her she never imagined.

“If you had told me when I was a freshman in college that I would swim 6 years past graduation as a professional swimmer and a member of the National Team for 10 years, I would have said you were crazy,” she said. “I truly believe this mindset kept me in the sport longer than many.

“I always wanted to achieve and win whatever meet I attended growing up but I was always looking at the next stepping stone not the end result. That high pressure and burn out that many go through I did not experience until I was ready to move on.”

Something else that she acknowledges helped prolong her competitive career was changing her focus from pool swimming to open water.

Always a distance swimmer, she was drawn to the longer swims during competition – the mile being her favorite. But since that event wasn’t offered on the biggest stage (Olympics), she decided to look at even longer distances – surrounded by nature.

“I knew I was not great as the distances got shorter, so in 2008, when the 10k was added (to the Olympics), that was my opportunity to continue,” she said. “To be quite honest, I had no idea I would be any good at open water. Nationals in 2009 was my first open water competition ever, and I did not know what to expect.

“The thing I loved most about open water was it was true racing. There were no times, no time standards, no records, just whoever got their hand on the pad first won and every race was incredibly different. The elements of the sport constantly kept me guessing, I had to think, and strategize differently than in a pool.”

It’s those lessons in the water that continue to apply to her life out of the water that Klueh said she knows were most impactful – plus all the great relationships she’s made (highlighted by her marriage to Michael) over the course of her swimming career.

“I am incredibly proud of my achievements in my career, from winning an NCAA title to winning the FINA World Cup circuit were amazing accomplishments,” she said. “However, as I look back, those achievements and the hard work created a platform for me to meet people, have adventures and learn more about myself and my resiliency.

“My swimming career was more than I could have imagined, and I am truly grateful for everyone who has come into my life and had an impact on me – the friends I have met and the opportunities I have had. These people and these experiences helped shape me. I am forever grateful to the sport and all those I have met.”