When it comes to her swimming career – no matter how successful it was – Anita Nall-Richesson feels cheated. 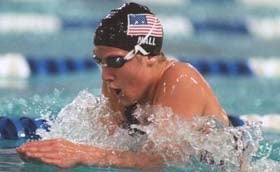 (youngest on the team) and bringing home three medals from Barcelona (one gold, one silver and one bronze), her career was cut short by illness and disappointment – something she said took numerous years to put behind her before she could move forward.

When she finally was able to look back without regret and reflect upon all that she accomplished – and all that swimming gave her – Nall-Richesson said she smiled, filled with great memories and a sense of pride that she swam and medaled on the world’s biggest stage.

“It took me a few years before I was ready to confront my swimming career, but once I was able, I knew I had done my best despite my circumstances,” she said. “When you devote so much of yourself to something like swimming at the highest level, it becomes part of your identity.

“It’s tough to separate that from your true self, but once you do, you can look back and move forward.”

Nall-Richesson said she established her swimmer identity as a 5-year-old, easily taking to the water and likening being in the pool to the natural, life-giving act of breathing.

Because she lived within walking distance of the pool in her Harrisburg, Penn., hometown and her parents worked during the day, Nall-Richesson and her older sisters lived at the pool during the summer.

By the time she was 12, she said she knew exactly what she wanted from the sport – even though she had no idea what it would take to get there.

“I remember watching the 1988 Olympics and telling myself that’s what I wanted, to be an Olympian,” she said. “I remember watching Mike Barrowman win in my breaststroke event, and even though we swam different events, I was enamored with Janet Evans. Of course, at the time, I didn’t know how I was going to get there, but I knew it was something I wanted.”

That same year, Nall-Richesson’s family moved to the Baltimore area for her father’s job, and she joined the North Baltimore Aquatic Club to help make her dream happen.

Before that move south, however, Nall-Richesson said she learned from one of her coaches in Harrisburg how to properly execute the breaststroke kick – and it ended up changing her signature event forever moving forward.

“I was never a very good backstroker or butterflier, so breaststroke became my event,” she said. “When the coach corrected my scissor kick to a strong breaststroke kick, everything clicked.”

At the 1992 Olympic Trials, Nall-Richesson was on fire as she set two world records en route to making the team in the 100 and 200 breaststroke events as well as the 400 medley relay.

When she swam in Barcelona, however, the recently-turned 16-year-old and first-time senior international team member said she encountered some unexpected but meet-changing problems that kept her from winning an individual gold medal.

“It was my first big international meet, and despite being a ‘precocious’ teenager, I was still inexperienced internationally and that showed,” she said. “I had a difficult time being separated from my coach and that led to some miscommunication, but overall, I enjoyed the experience, especially living in the Olympic Village and getting all the Olympic gear to wear.”

Despite the shortcoming in her own events – especially after setting world marks at Trials – Nall-Richesson, who met and married former University of Kansas football player and current Denver Broncos’ strength and conditioning coach Luke Richesson while swimming at Arizona State, left Europe knowing with more hard work and dedication, she could return to the Games four years later in Atlanta.

But due to unforeseen health issues – namely chronic fatigue syndrome that made consistent training and results difficult – Nall-Richesson never got her second chance at individual Olympic gold.

“Initially, because of the symptoms – high fever and pain in my neck and heels – doctors thought it might be meningitis and considered doing a spinal tap,” she said. “I’ve never been what you’d call super sturdy health wise, but this was more than any of us expected.

“It was debilitating at times, and we never truly got over it with my training. We found ways to work around it.”

At 1996 Trials, Nall-Richesson came up short of making the team (finished 6th in the 200 breast), and four years beyond that, she swam so poorly at 2000 Trials that she didn’t even finish the meet.

“It was evident to me after I swam so badly in the first event that it didn’t make much sense to continue in my last event,” said Nall-Richesson, who won three gold medals at the 1993 Pan Pacific Championships and a bronze at the 1995 Pan American Games.

“Even as late as 2000, I was still feeling the effects of the virus that went undiagnosed for over a year, so my training wasn’t consistent, and it showed at Trials. It didn’t make much sense to keep swimming after that.”

Since then, she and Luke started a family – having son, Luther, and daughter, Sunny – and Nall-Richesson decided to take a different career path than the one she envisioned while earning her Communications degree at ASU.

Intrigued about what caused her own health issues during her career, she began studying health and the connection to what we eat and how it impacts athletic performance.

She became certified in nutrition through the Southwest Institute of Healing Arts and started working with young athletes and people about food – teaching them about what to eat to improve their performance and health.

“If they were having issues with food, what was in their food that was affecting their health?” she said. “I had similar issues when I was training and competing, but I didn’t know my problems were related to what I was eating. It’s great to work with young people in particular to help them figure out how eating right can help move them forward in their sport.”

She now runs Champion Powered Programs from her home in Denver, continuing to work with athletes to perform high performance health assessments and help them realize you are what you eat.

Nall-Richesson also is involved with the We’re All a Little Crazy program in New York, telling her own story about how she felt very alone and depressed when her health problems went undiagnosed for many years. ‘

“It’s really difficult to live inside your own head, knowing something is wrong with you and doctors can’t find out what it is and you start to question your own sanity,” she said. “It’s very lonely, so I enjoy presenting and participating in We’re All a Little Crazy to let other people know you don’t have to be alone. There are people and services out there that can help.”

She also said she is happy to tell her story whenever she can – and sing the praises of what swimming has given to her and how it has positively impacted her life.

“Swimming taught me persistence, grit and determination, in the pool and in life and when it came to figuring out what was causing me so many health problems,” said Nall-Richesson, who is also a certified life coach. “Swimming also taught me about the importance of discipline and structure and how those can set you up for success.

“I spent a lot of years frustrated by what happened to my swimming career, and I couldn’t talk about it for a long time. But I’ve done a lot of work on myself, and now I’m not only able, but I’m excited to talk about it. It was a chapter I needed to close, and now that I have, it’s opened up so many other opportunities and possibilities.”