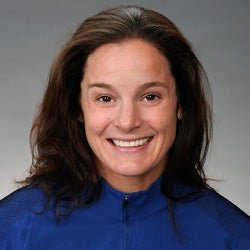 Lindsay Mintenko has served as the USA Swimming National Team Managing Director since 2006.
Mintenko is one of the University of Southern California’s most decorated women's swimmers. A 21-time All-American, she won five NCAA individual titles-three in the 500-yard freestyle (1996-97-99) and two in the 200-yard backstroke (1996-97)--and she helped the Women of Troy to their only NCAA team championship in 1997. In her USC career, she reached the NCAA finals in all 12 individual events in which she competed. She also won six career Pac-10 titles.
She won gold medals as a U.S. team captain at the 2000 and 2004 Olympics in the 800-meter freestyle relay and added a silver in 2004 in the 400-meter freestyle relay. A 10-time U.S. national champion, three-time medalist at the World Championships and a seven-time medalist at the Pan-Pacific Championships, she set numerous USC, American and world records. After five years as an USC assistant coach, she assumed her current role as USA Swimming's National Team managing director in 2006.
Mintenko graduated from the University of Southern California in 1999 with a B.A. in communications and minor in Business.  She currently resides in Colorado Springs, Colorado, with her husband, Mike and their two children.