Aquajets Coach Kate Lundsten’s summer experience at the FINA World Junior Championships presented by Sigma Gamma Rho Sorority Inc is something she said she will never forget. And she adds that she is excited to see how these swimmers fare moving forward, not just representing the U.S., but on their club teams and later in college. The continued wave of camaraderie is also something she really enjoyed, as the Minnesota native explains in this week’s 20 Question Tuesday. 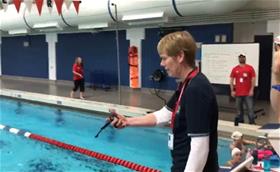 Kate: Oh my goodness, where to start? I’ve been on a quite a few (U.S.) teams but I had never before been a head coach -- I was an assistant. Let me make sure I phrase this in the right context: Those were all good experiences -- none were bad in any way whatsoever. But this time it was so good that you almost forgot you were at a swim meet with (laughs) people you didn’t know -- we had a blast.

2. The men’s and women’s staff worked together, why was that so successful?

Kate: I think that was (National Junior Team Director) Mitch’s (Dalton) idea. On different Junior National teams, we have done it different ways. That created an atmosphere of one team. And I loved that. They acted like a team. The guys and girls were all sitting together. It was pretty special.

3. Logistically did it help?

Kate: I think it did, and maybe having the meet in the United States gave it that “home” feeling which also made it comfortable. But as far as coaching in groups, I do think that helped. Everyone had a coach and the coaches were also all working together. I think the big thing that it did was put the swimmers at ease because they had coaches they could reach out to for anything to get questions answered.


4. You went to wonderful Hamline in Minnesota, and yet after college you immediately went aboard -- was that to expand your world and thinking?

Kate: After Hamline I did travel and lived overseas for about 4-5 years. That gave me a bigger picture of the world. Even though we think a view of the world, to experience that was very helpful for me. I think that’s just the way I was raised in Minnesota -- to understand the value in that.

5. Aquajets is really on the rise -- to what do you attribute that?

Kate: I have an incredible staff. Us working together and the fact that we get along, I think that helps so much. Our big thing is we want to have not only good swimmers but we want to have good human beings. The kids see that the staff gets along and there’s that unity. So you get fast swimming and enjoying each other more.

Kate: It started in three lanes in what I think was something like a 22-yard pool, There was maybe 50 kids from ages 5 to 15, and they swam in those three lanes. It has changed a lot. I always remember where we came from. Jon Foss started the team and kept being tenacious to help it grow the right way.

7. Have you thought of coaching at college?

Kate: I love club swimming. It has been great. The team I am with, I love it. I don’t see going to a college and dealing with everything (laughs) they have to deal with. Give me a parent any day to deal with -- we have some of the best ones. So this just fits me well.

8. The diversity of the U.S. team, what was that like?

Kate: Incredible. And it was in every way imaginable, from race and ethnicity to where they were from and what their interests were. There was a literal aspect to it too, because we had some really tall kids and some really short kids, and I just loved seeing them together with the height difference. There were so many different personalities, which had a great effect of having them all fit together and be able to share different aspects, which brought everyone together. It was quite special to watch it happen.

9. The U.S. had a great meet and the relays, it seemed like everyone stepped up -- to what do you attribute that?

Kate: You know you are swimming for a bigger purpose than yourself. I still believe to this day a relay is not just about you, but your ‘mates. Of course they will succeed with that attitude. And they all viewed it as an honor to be on the relay and put everything on this line. To this day relays are still one of my favorite things because of how it brings everyone together and they get more out of themselves -- for each other.

10. You had a bunch of Olympians come speak to the team throughout the week in Indy, what was that like?

Kate: The team was talking about the greatest race they could remember, and it came back to the relay in 2008 in China, “Jason Lezak getting to the wall” to help Michael Phelps to another gold. And as they are talking about it, into the room walks Jason Lezak! That was great. We were also talking about great swimmers and of course they all love Liz Beisel, and then there she is in the room with them. I have been on a lot of teams and never seen something like that. And you know how Liz is, she brought stuff for kids to wear in the stands and sat with the kids during the meet. They’ll remember meeting all the Olympians for the rest of their lives.

11. What surprised you most about the Olympians?

Kate: Oh, man, they are user friendly! It really affected me, and inspired us all. With everything going on in Texas (Hurricane Harvey in Houston), Simone Manuel was still able to come in and share her story and inspire the kids. Missy Franklin was wonderful with everyone, just sitting down and speaking with them, “Hi, how are you doing?’’ and listening to them. Anthony Ervin is just incredible and it was neat to hear his perspective and approach because it shows how different things work for different people but there are common areas that also overlap.

12. What was another country that impressed you at the meet?

Kate: Definitely the women from Canada although we knew with Penny Oleksiak and all of their talent how good they are -- those are just strong, tough young women. The Italians were also impressive in a lot of their events. And the Japanese -- oh my goodness they are good, especially in the butterfly.

13. What’s it like to see the world improving in swimming and how much the sport is growing everywhere?

Kate: It is incredible. That swimming has become that big of a thing is what’s really amazing. It’s fun to see that.

14. You mentioned the team’s personalities meshing, as a coach, what did that mean to you?

Kate:  It had me really excited because it makes me so proud of the sport of swimming. These kids are just good human beings. Seeing their sincere care for each other was, to me, very endearing -- really incredible.

Kate: They just know what they are doing. They are really good at this. We got there and saw how the pool was dressed up and thought, “This is awesome.” They thought of everything. It was such a well run meet too. A lot of volunteers, a lot of USA Swimming staff and incredible USA swimming officials and volunteers, and a lot of coaches -- it was just an amazing week.

16. Did you get to talk to the other countries’ coaches at all?

Kate: I was sitting there with Mike (Parratto, Riptide Swim Club), who is Regan Smith’s coach. A Japanese coach came up and using the app on his phone that translates asked how we were. So he was able to ask Mike some questions and get responses. And then (U.S. swimmer) Erica (Sullivan), who knows Japanese, came out and started translating everything. I was just in awe.

17. You and men’s head coach Bruce Gemmel had quite a coaching staff, didn’t you?

Kate: We did and I hadn’t spent a lot of time with anyone really except Mike. But the more I got to know them, the more impressed I was. They are all really good people, and really good coaches. I’d listen to them talking to our swimmers and think, “They really know what they are talking about.” These are all coaches who have done such incredible things, and they all had such respect for one another.

18. We never know what a meet like this “means” until the swimmers are older -- usually until the next Olympics -- but how big was this for their development?

Kate: We had Olympians come out of that trip in 2013 to Dubai (for World Juniors). I think just going to a meet like this and seeing what’s out there makes them really excited and inspires them. And having it here in the States was a special thing for them because we all wanted to be good. From a swimming perspective, it kind of opens their eyes, “Wow, we’d better be at our best and aware what’s going on because there are a lot of fast swimmers.” That inspires the good to be even better.

19. It seems like the median age is coming down after a couple of quads where pro swimmers stayed in the sport longer, is that accurate?

Kate: There are a lot of fast teenagers. I am seeing that. I think Natalie (Coughlin) and Michael (Phelps) led the way on that, where you can swim as long as you want and are at a certain level. And the group from that era, many of whom spoke to our team in Indianapolis, really helped grow the sport. Now you are seeing the results of that. These young kids are not afraid to put it all on the line and challenge themselves. If you remember back to the ‘80s, a lot of the swimmers were younger. So I think it’s cyclical and in four years it could be more younger swimmers in or just out of college, or there could be more post-grads until we’re almost at Olympic Trials again -- that’s one of the exciting things, because you really can’t know. But for club swimming, college swimming and the NCAAs, all this young talent is a great thing because that (NCAA Championship) meet just keeps getting faster.

20. How do you personally stay fresh and inspired?

Kate: The kids I work with. Oh my goodness, that is the joy of swimming for me. And it is always changing so you have to keep up with it. But again, that’s something that keeps me excited because if I’m doing the same thing year after year and not learning or improving, then I am doing something wrong. You have some key things that work but even those tend to evolve and so you have to keep thinking and learn to adapt, “How can I make it better?” I also work with some really great people, from the administration and boards I work with to the coaches and our parents. When you have good people around you, it makes it all a lot more fun, and you’re more likely to do better work. That there is always room to improve is something that makes swimming really cool.