As he continues to progress through the swimming ranks, Zach Apple has made an observation that served him well this summer at Phillips 66 USA Swimming National Championships and FINA World Championships.

Racing – and swimming fast – is habit-forming.

The more he does it, the more he wants to keep doing it.

“I think that competition is almost like a drug in the sense that it is addictive,” he said. “I love just getting up on the block and putting everything you have into a race. Swimming is a sport that has a sort of brutal honesty in the fact that the clock doesn't lie and that is something I really enjoy.”

Along with his freestyle sprint teammates, Apple made good on that desire for speed when he swam a leg on the preliminary 400 freestyle relay team in Budapest. His third leg set up the U.S. team well for the final, where his teammates raced to gold.

Apple, who finished fourth in the 100 free at Phillips 66 Nationals (as well as the 50 free) to qualify for the World team, said the experience of competing in his first senior-level international meet was amazing – something he’ll never forget as he moves forward in his swimming career.

“I couldn't have asked for a better first international competition,” Apple said. “Being presented with the gold medal was a very surreal experience.”

Apple’s experience in Hungary was so positive and life-changing that he decided to forego competing at World University Games later this month.

With his junior year and season at Auburn beginning soon, he decided to reinvest some time and energy into himself rather than compete in Taiwan.

“I decided to not compete in World University Games because I felt that taking a mental break after world championships and before school starts at Auburn was very important in me staying as engaged as I can as soon as the college season starts back up,” he said.

Bringing home that World gold didn’t hurt, either – an experience Apple admits left a lasting impression on him.

He said he’ll especially never forget how loud the crowd was right before he dove in for his leg of the relay.

“The Hungarians were performing well in our heat and the crowd was responding,” he said. “I had never experienced such an exciting crowd with so much energy.

“I think the biggest thing I learned was how to handle competing against the best in the world. It is something that can throw some people off their game but I think the United States has kind of mastered staying focused and performing when it matters.”

Apple said his auspicious swim career began rather humbly, as many do. 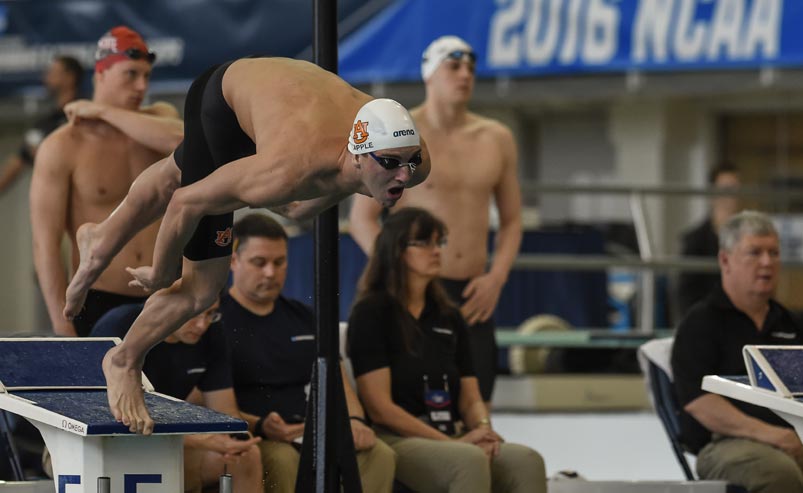 He started swimming on a summer club team when he was 7 because a friend was on the team, and they needed another kid to make a relay foursome.

He only swam summer club until high school, when he chose to focus on swimming over basketball, football, baseball and soccer.

“After my sophomore year, my high school coach told me I should look into finding a year-round club team to train with,” said Apple, who hails from Trenton, Ohio. “That next summer I started training with Great Miami Valley YMCA under Chris Bushelman.”

From there, it’s been all upward movement for Apple, who, essentially, is really just finding his stride in the water after only a few years of full-time training and competing.

Considering last summer at Olympic Trials, he finished 25th in the 50 free and 35th in the 100 free, the progress that he has made is measurable and dramatic – with nowhere to go but up.

“I think my youth in the sport plays a significant role in how much time I dropped from last year to this year,” said Apple, an exercise science major at Auburn with aspirations of staying in the sport after the conclusion of his competitive career.

“I also think that having coaches at Auburn who constantly push me to the next level and challenge me to be a better version of myself helps a lot.”

Another thing that motivates Apple to want more in the water are the personal goals that he sets at the beginning of each year – and it’s working.

In his view, the path to success for him starts with centering on his goals and letting them guide his decisions.

“This makes every decision much easier when you know what you are trying to accomplish at the end of the season,” he said.

With this year’s Nationals and Worlds in the books, Apple said he think he can take away the experience of knowing he can compete with the best in the world and ride that confidence through next season and into next summer.

“My sophomore season at Auburn was great, and setting the school record in the 200 free and becoming our fastest American sprinter in history was a dream come true,” he said. “NCAAs was a real confidence boost going into the summer and competing at Nationals.

“Not setting limits on what I can accomplish this next year is going to be very important for me. This summer gave me a huge boost of confidence. Having that gold medal sitting on my desk is going to be a motivator and a reminder to trust the process.”