Andrea Cottrell: Something in the Water

Picture it: A young Andrea Cottrell practicing her swim strokes with a neighbor in her front yard.

Nothing out of the ordinary, right? Practice makes perfect, after all.

The funny thing is, there was no water. No pool. Just grass and dirt and the occasional squirrel.

“My neighbors had been swimming for a couple weeks, and I entered the season late,” she said. “We were just going through the motions on dryland, and I can remember being very overwhelmed with all the strokes and trying to remember which one was what. Needless to say, I am not a butterflier.”

That’s the way she perfected her strokes when she first started swimming – water or no water – and it’s paying off now.

While her start may have been rudimentary, the long-term gains have been more than she and any of her early teammates and friends ever imagined.

Cottrell is competing in the 100 and 200 breaststroke 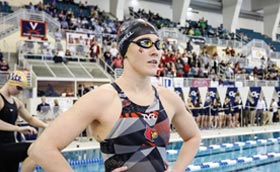 events this week at the U.S. Open as a prelude – a tune-up – before she leaves for Taiwan later this month to represent the United States at World University Games.

“Every summer, my friends and I would go to this daytime playground program where basically it got us away from our mothers so they didn’t have to watch us all the time,” she said. “One summer when I was 10, all my friends decided to join the summer league team instead of the playground program.”

Ever since those days, Cottrell has continued to watch her swimming star shine as she’s steadily risen through the ranks.

While she never enjoyed an individual NCAA title during 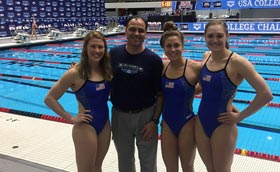 her years at the University of Louisville (she was part of a couple of relay championship swims), she has been a regular on the U.S. National Team, excelling in long course competition.

Last summer at Olympic Trials, she made it into the finals of the 100 breaststroke (finishing 6th), and also made the semifinals of the 200 breast.

Along the way, she had one of the best meet experiences of her career and gained a tremendous boost in confidence.

“This meet, in particular, helped me see the things that I need to work on because I am able to see where my strengths and weaknesses are in my races. I am able to visually see where I am losing races so I can go and work on that at practice.”

At Phillips 66 USA Swimming National Championships in June, she finished 6th in all three breaststroke disciplines – qualifying for WUGs in the two sprints.

Cottrell said she’s excited to swim this week in East Meadow, N.Y., at the U.S. Open to see where she is since Nationals and make sure she’s in the best possible racing shape before WUGs.

“The U.S Open will be a great meet to just be able to focus on my strategy and how I want to swim my races,” said Cottrell, who finished her college eligibility this past spring but won’t graduate until next spring. “I am swimming the 100 and 200, but I’ll be focusing on the 100 a lot more at the meet. I might time trial a 50 since I will be swimming that as well in Taiwan.

“But the meet fits in very well with my overall race calendar because I like to get in some racing every few weeks. I had World Trials and then I went to Sectionals back home in Columbus, Ohio last week, and then I will have the U.S Open so I have gotten in a few chances to just practice my races in a great race environment.”

Cottrell has just over a week between the end of the U.S. Open and when she leaves for Taiwan August 15. Competition begins August 20 and runs through the 26th. Having competed at WUGs two years ago in South Korea, she said she feels well prepared for how the meet progresses.

In many ways, that meet in 2015 was a catalyst for everything that’s happened for Cottrell’s swimming career since.

“It was amazing to travel to the other side of the world for the first time,” she said. “I had also never really gotten to meet other fast swimmers in the United States, so getting the opportunity to just meet all the people I did and have the experience to wear that USA cap was really special and motivates me at practice. It definitely keeps you hungry for more.”

And now that she’s more seasoned as a swimmer, competitor and person, Cottrell said she’s eager to soak in the experience, swim fast and have fun – whether or not she swims beyond this year, which is still undecided.

“To be on the National team and race at any international meet is a stepping stone and should give me confidence for the bigger things to come, in and out of the pool,” said Cottrell, an exercise science major who plans to get her master’s in nursing, specializing in neonatal care.

“For this meet especially, it will be good to race people from all over the world and just overall practice my race strategies and execute them the way I’ve been working on at a high level international meet. I think that if I keep practicing the little details and focus on those things that I can control, then I will be able to get a little better each day which will set me up well for the future.”

And what about that water in the Louisville pool – the same water that helped Kelsi Worrell become a 2016 Olympic gold medalist and placed Worrell and Mallory Comerford on this year’s FINA World Championships team, where they won multiple gold medals?

“No, there is unfortunately nothing in our water here in Louisville, although it is rather cold at 6 a.m. practices,” she said. “But the coaches are absolutely incredible. Arthur (Albiero) and all the other coaches have done an outstanding job transforming this program to what is it today.

“All of the coaches have swam under Arthur at some point in their careers, which is something I find so valuable in the success to this program. The coaches really take pride in what they do and go above and beyond in making this program what it is, to see us preform at our best.”