INDIANAPOLIS – High stakes set up some epic battles in the pool Tuesday at the Phillips 66 National Championships.

On the line were spots on the U.S. World Championships Team, which will compete July 23-30 in Budapest, Hungary.

Here’s a look at some of the action:

Race of the Night

Each race had its own drama.

In the men’s 200m butterfly, Conger took the lead at the first 50 and held off challengers Pace Clark and Chase Kalisz for the win in 1:54.47, out-touching Clark by 11-hundredths of a second.

Comerford upset Olympic champion Simone Manuel in the 100m free, finishing with a meet record of 52.81, just 11-hundredths off the American record Manuel set last year in her gold-medal swim in Rio. It was also the third-fastest time in the world this year. Manuel was second in 53.05, followed by Neal in 53.59 and Worrell in 53.99.

Then in the men’s 100m free, Adrian out-touched Dressel in the last stroke to win by a hundredth of a second, 47.96 to 47.97. Adrian’s time was the third-fastest in the world this year, Dressel’s the fourth-fastest. With the win, Adrian has captured eight of the last nine long course National Titles in the 100m free. Haas took the third spot in 48.20, with Apple taking fourth in 49.49.

So of the three, which was race of the night?

It’s a tough one, but the nod goes to Adrian, just based on the closeness of the race and where it places him (and Dressel, for that matter) heading into worlds.

Below, Adrian and Conger talk about the keys to winning a close race. For Adrian Tuesday, it came down to the finish. For Conger, it was his strategy that made the difference.


Upset of the Night

This is an easy one. A swimmer looking to make a name for herself, stepping up and taking down an Olympic champion and a meet record en route to qualifying for her first World Championship team. The honor goes to Comerford in the 100m free. 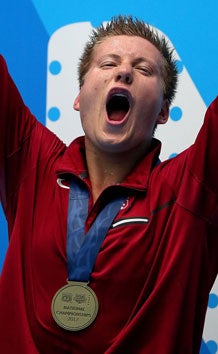 Photo of the Night: The Look of Pure Joy

Nineteen-year-old True Sweetser of Stanford qualified for his first World Championships team with a win in the 1500m freestyle. Sweetser was third in a three-way race between him, Robert Finke and PJ Ransford when Sweetser made his move at around the 1200-meter mark. He passed the other two swimmers with about 150 meters to go and cruised to the win in 14:59.73. Finke was second in 15:01.31, followed by Ransford in 15:01.82.

Flickinger won the women’s 200m butterfly, her second National title in this event. Flickinger led the field from start to finish, touching in 2:07.60. Finishing about a second behind her was 17-year-old Dakota Luther of the Austin Swim Club in 2:08.71.

A Word About Qualifying


Top Tweets of the Night