When he agreed to take over the coaching reins of the Arizona State men’s and women’s swimming programs almost two years ago, Bob Bowman knew he had his work cut out to restore them to past prominence.

He and everyone else, however, didn’t anticipate such a quick turnaround.

At NCAA Championships last weekend, the Sun Devil men finished 14th overall, while the women were 29th a week earlier.

Both teams improved exponentially from 2016, and appear poised for even greater results in 2018 with strong returning cores and great new talent arriving in the fall.

The resurgence can be attributed to many things – but they all come back to Bowman and his coaching excellence.

That, and a new, fresh attitude and outlook that can be traced back to a little brown-eyed boy named Boomer.

“It’s truly a blessing to be (Michael Phelps’ son) Boomer’s grandpa,” Bowman said. “He brings me so much joy and happiness – more than I could have imagined. Seeing his smile and hearing his laughter absolutely brightens my day.”

Bowman never took time or focus away from swimming – and Michael Phelps’ storied career – long enough to have a family.

It was his guidance and vision, after all, that took Phelps’ 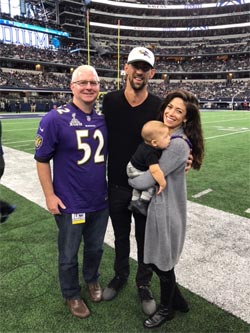 tremendous natural ability and a desire not to lose to 26 Olympic medals – 23 of them gold – in five Olympics.

“Michael has always hated to lose – and it’s not just in the water,” Bowman said. “We went to see a (Baltimore) Ravens game in Dallas last year, and we played rummy along the way. He is as competitive at cards as he was in swimming. He’s driven for excellence in everything he does.”

Even before Michael retired following the 2016 Olympics, Bowman decided to start this new chapter of his coaching life in Tempe – but his turn at Arizona State isn’t his first in the college coaching ranks.

He spent several years at the helm of the University of Michigan men’s program prior to Michael’s historic Olympic run in 2008, and then a return to the North Baltimore Aquatic Club (NBAC) after that.

Now in his second year with the Sun Devils, Bowman said he has found immense joy and reward in restoring both programs to new levels of Pac-12 and national success.

And while he wasn’t necessarily looking for the Arizona State opportunity at the time, when a challenge presents itself, it’s difficult to say no.

“I think, for me, it’s different this time (than when he was at Michigan) because my focus isn’t as narrow; I’m allowing myself to enjoy the overall college coaching experience more,” Bowman said. “It might be because I’m at a different place in my life now than in 2008, or maybe it’s because Michael is retired for good, but I’m just having a much better time now.”

While he’ll always be linked to Phelps and his storied career that spanned five Olympics over 16 years, a closer look at Bowman’s own storied career in coaching reveals that he has done much more than just develop Michael into the GOAT.

After coaching two years (including his senior year) at Florida State, Bowman moved onto the nearby Area Tallahassee Aquatic Club for a season. From there, he coached in Las Vegas (Las Vegas Gold Swim Team) for a year, followed by consecutive seasons with the Cincinnati Pepsi Marlins and Napa Valley (Calif.) Swim Team.

He left Napa for the Birmingham (Ala.) Swim League for two seasons but returned to coach two seasons back in Napa before his coaching life took a turn that would come to define him as one of the greatest coaches in the history of swimming.

“I always knew I wanted to coach; even when I was competing, I felt like I saw my own swimming from a coach’s perspective,” said Bowman, who said his coaching philosophy is an collection of those he worked with over the years, namely Sid Cassidy, Chuck Warner, David Marsh, Paul Bergen and Murray Stephens.

He relocated to Baltimore in 1996, starting as the senior coach before moving up into the high-performance coach position for the final five seasons there. It was shortly after his arrival that he recognized the talented young Mr. Phelps, but Bowman has worked with many other talented swimmers during his career.

Most notably among that group is Schmitt, who lives with the Phelps family and remains very close to Bowman while she works toward her master’s degree in counseling at Arizona State.

Since last year’s Olympics, Bowman said life has slowed down considerably, although he still accompanies Michael on occasional speaking engagements and appearances while also coaching.

“Does Bob’s life ever slow down?” Schmitt said with a laugh. “He’s determined and passionate. He’s brilliant with what he does. It makes him the best out there.

“Yeah, Michael is done, but Bob still has a team out there that he’s passionate about – so I’d say it seems like he’s working hard to help the team out. He’s made so much progression so far, and it seems fun for him.”

Building the ASU program back to conference and national prominence is definitely driving Bowman’s renewed excitement for getting back in the college coaching game.

“I’m enjoying every part of it, and now that I’m able to focus on the college team, everything is falling into place to make Arizona State swimming really great; we’re already ahead of where I thought we’d be two years into the program,” he said.

“Being able to focus on teaching – the actual X’s and O’s of swimming – as well as coaching has made it exciting for me. It’s turned out to be everything I wanted.”

You can read more about Bowman, his new life at ASU and his changing relationship with Michael and the Phelps family in the upcoming issue of Splash Magazine.