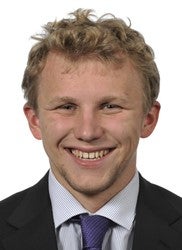 Donkersgoed is the Deputy Vice Chair of Athletes for USA Swimming. He grew up swimming for Aquajets Swim Team in Minnesota. He started in governance in the Minnesota LSC. He served for six years on the Rules and Regulations Committee and National Board of Review. He was appointed to the Board in 2015 and elected to his current role in 2016. He swam collegiately at Northwestern University, where he was also an active member of the Illinois LSC. He holds a degree in Social Policy and Legal Studies from Northwestern University.  He resides in Milwaukee, Wisconsin where he coaches a local swim program and works for Kiefer Swim Products.