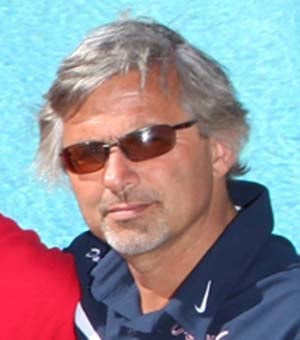 Don Heidary has forty years of coaching experience at the USA Swimming, high school, and summer-league levels. He is the co-founder of Orinda Aquatics, with his brother Ron, and is the head coach of Miramonte High School, both in Northern California.  Averaging 125 swimmers, Orinda Aquatics has been a Silver Medal Club, placed 32nd in the nation in USA Swimming’s Virtual Club Championship (2014), and is Level 4 USA Swimming Club Recognition. Heidary has been a speaker at national clinics on character, culture, and swimmer development. He is an ASCA Level 5 coach (USS and High School), is on the Pacific Swimming Board of Directors with responsibility for Club Development, and is the President of the Board of the American Swimming Coaches Association (ASCA). Don is a 1984 graduate of U.C. Berkeley.