Sammy Joseph stands on the pool deck during The Woodlands Swim Team’s afternoon practice. The former professional football player, Sugar Bowl champion, and brother to new Denver Broncos head coach Vance Joseph isn’t here to sign autographs, and he’s not a guest speaker. Practice is just beginning, and Sammy turns up the volume on a Taylor Swift song that blasts through the speakers. He high fives the swimmers as they make their way to their lanes. After sets in the pool, the team climbs out and heads to Sammy for dryland practice.

“What’s up, coach?” They greet him, ready to work.

Since April 2015, Sammy Joseph has been the strength 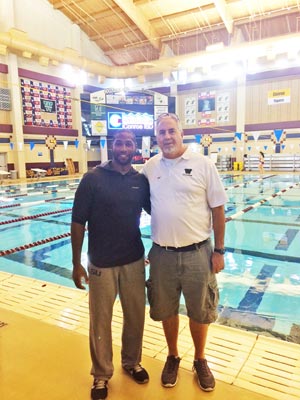 and conditioning coach for The Woodlands Swim Team. He works with groups of swimmers ages 13 and older to improve their physical strength and flexibility, as well as mental strength and a sense of confidence. He is at practice every day in order to watch to them work in and out of the pool. This attentiveness is how he programs workouts specifically for each group of swimmers he works with. It also allows him to communicate constantly with the coaching staff and team regarding tapers, injuries, or any special circumstances. He also attends local meets, standing on the deck watching his athletes intently, assessing the effectiveness of his programs and celebrating his athletes’ hard work.

Eventually, Sammy moved to Houston and took a job at a sports facility where he met Tim Bauer, head coach of The Woodlands Swim Team. Because of his background in strength and conditioning at a college level, Bauer offered him a position in program with similar rigor, but for kids and teens.

One-hundred and forty of them, to be exact.

Though he comes from primarily a football background, Sammy’s passion for coaching extends beyond the gridiron. It’s in his blood –with Vance Joseph now the coach of an NFL team and their older brother Mickey Joseph as the current running backs coach for Louisiana Tech.

"My entire life has been in sports—all sports,” said Vance. “My brothers—we are all coaching now. It's a sports family. That's how we grew up and we love it."

In order to give his swimmers the most he can, Sammy does his research, collaborates with other coaches, and read all kinds of literature. He also looks to his brother Vance for input.

“When I’m on the phone with Vance and I’m talking about an IM or a 200 back, it’s kind of weird to him to hear me talk like that,” Sammy said. “But we always converse about coaching, how to motivate [athletes], and how to let athletes express themselves.”

And the conversation is a two-way, with Vance often looking to Sammy for insight as well.

"We talk about being detailed with your coaching and being clear on what you want your players to do and to work on each day,” said Vance. “Always have a plan for your players. Keep it consistent, keep it steady and make it progressive for your players."

Sammy is excited to see Vance’s performance as head coach for the Denver Broncos.

“Believe it or not, I wasn’t surprised [he got the position],” said Sammy. “You have no idea how hard that man works. He’s a motivator. Vance it going to bring it there.”

Vance is not surprised, that Sammy is having a great impact on The Woodlands Swim Team.

"Sammy is a very detailed coach,” said Vance. “He's a coach that really dives into his swimmers' personalities and brings the best of out of them. He loves coaching—he's into it—and he loves watching his swimmers get better."

But he still lets his LSU Tiger days show through.

“He plays music, and sort of treats it like football,” said Bauer. “They break it down after every weight session like you’d see in fb practice. They talk about the process of getting stronger, and getting from A to B.”

What stands out most to Bauer about Sammy are his motivational skills, as well as his energy and willingness to go the extra yard for the team.

“If [an athlete] sends him a text and says ‘I’ve got a math test, can I come in early to get my dryland in?’ he’ll work with them to get it done,” said Bauer. “He’s got a really good bond with the kids. He’ll come and watch them swim at 8a.m.. He’ll lead them if they need to go through a different stretching routine. For Sammy, the number one thing is that simple, that they know he cares.”

Sammy has taken some pages from Coach Bauer’s book during his time in Houston, as well as some books from the shelf in his office. Sammy and Bauer discuss a lot of coaching ideas and style, which includes swapping books. Recently, he loaned Bauer “You Win in the Locker Room First: The 7 C's to Build a Winning Team in Business, Sports, and Life” in exchange for Daniel Coyle’s “The Talent Code.”

“Communication with the athletes has really become important to me,” said Sammy. “We ask them how nutrition and sleep is going, and how their life is going. My monitoring game is on 10. I learned that from Tim and it’s really working.”

The dedication Sammy sees in his athletes inspires him to keep pursuing excellence alongside them.

“Swimmers are very mentally tough,” Sammy said. “For a season that 10-11 months long, they’re in the pool in the morning and again in the afternoon. You have to be really mature and disciplined to come in and work hard and look at that black line every day.”

Whether they wear a helmet and pads or a cap and goggles, true athletes are unmistakable to Sammy.

“When I see athletes working their butts off every day, that’s all I’m looking for,” said Sammy. “It’s in the work. It’s been a great experience.”